When it comes to food, Christmas is all about indulgence. We want a meal to remember and one that will impress family and friends. It can be hard trying to come up with an interesting and delicoius vegetarian or vegan festive feast if you’re not used to it. Or you could just be looking for new ideas. Here’s a bountiful basket of over seventy vegetarian and vegan Christmas recipes that should take some of the stress out of your yuletide decision making. 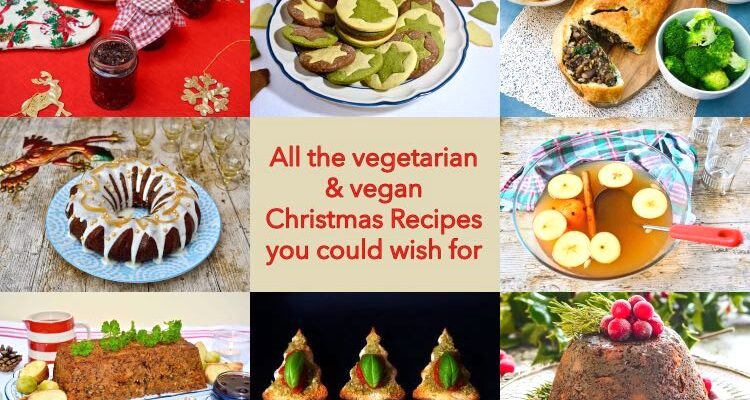 Whether you’re vegetarian, vegan or just looking for some non-meat alternatives, you’ll find plenty of ideas in this comprehensive festive recipe guide. Start with homemade mincemeat and finish with leftovers and a ‘cheese’ board on Boxing Day. Wake up to cinnamon rolls for breakfast, enjoy a drink with some festive canapés then tuck in to the main event.

I hope you find something to inspire you in these vegetarian and vegan Christmas recipes. If not, head to my Vegetarian Christmas board on Pinterest. You’ll find even more recipes there. May your festivities be merry and go with a swing.

Before you get too stuck into all these vegetarian and vegan Christmas recipes, do try and make some mincemeat. It’s such useful stuff. Don’t be limited to mince pies alone, although they can be delicious. It can be used as an ingredient for all sorts of things, including a last minute Christmas cake (see Christmas cake section for a recipe).

I have several recipes for mincemeat on Tin and Thyme; I’ve included two of them here. The earlier you prepare it the better it will taste.

mince pies via Recipes Made Easy

the ultimate vegan mince pies (vegan) via The Veg Space

mincemeat brownies via Tin and Thyme

Christmas is a time for giving and cookies make an excellent gift. You’ll find heaps of biscuit recipes here on Tin and Thyme, but I’ve extracted the ones I thought were the most festive. A Scottish shortbread recipe is also a must.

chocolate pistachio biscotti with orange & cardamom via Tin and Thyme

pistachio biscuits with rose & almonds via Tin and Thyme

My favourite Christmas breakfast is a bowl of frumenty. It’s an old fashioned recipe, but so good. It’s best cooked overnight in a slow cooker, or, as my mother does, in the bottom of the Aga. It consists of whole wheat grains such as spelt or kamut with raisins, orange zest, spices and double cream – mmm! I still haven’t managed to get the recipe onto the blog, but I will some day.

Alternatively, porridge with a slug of whisky and a big dollop of clotted cream is rather good. If that doesn’t float your festive boat, here’s a few other ideas.

mincemeat buns via Tin and Thyme

Strasbourg kouglof via Tin and Thyme

It’s nice to have something other than posh crisps to nibble on whilst you’re waiting for dinner. I usually try and make something a bit special. Sadly, I don’t seem to have documented many of my recipes here on the blog. Luckily, I’ve found a few to include in this guide to vegetarian and vegan Christmas recipes.

Call me old fashioned, but I do enjoy a good nut roast. Please don’t think nut roast has to be boring, dry or tasteless; it can be a real star. I always find meat eaters dig into my nut roast with gusto, so there must be something to it.

If we’re having Christmas at my mother’s, she always makes me a mock goose and that’s pretty good too. I have no recipe for mock goose here, but you’ll find a few nut roasts and a couple of alternative recipes. Most of those below are vegan or have vegan options, which makes them suitable for pretty much everyone.

Much as I love my nut roast or my mum’s mock goose, it’s always the Christmas side dishes that I really look forward to. Jerusalem artichokes in lemon sauce, parsnips in orange sauce, sticky red cabbage, never mind the roast potatoes, parsnips & onions. Even Brussels sprouts when cooked well can be delicious. For a quick guide on how to do this, head over to my post on how to cook the perfect Brussels sprouts.

So with this in mind, you’ll find a good selection of sides included in these vegetarian and vegan Christmas recipes.

Just because we vegetarians and vegans don’t want to eat a bird, it doesn’t mean we don’t want a bit of stuffing.

No guide to vegetarian and vegan Christmas recipes would be complete without some bread sauce and gravy. Cranberry sauce is always good too. I make a mean cranberry sauce, so I usually make some to take along to whoever’s hosting on the big day – sometimes that’s us.

cranberry sauce with orange & Port (vegan) via Tin and Thyme

Perhaps I would say this, but my mother makes the best Christmas puddings. Even CT likes them and he hates fruit cakes, mince pies and Christmas pudding. It’s a bit of a tradition now that she makes them for family members and many of her friends too.

To my shame, I’ve never made one in my life and don’t have the recipe. I guess I’m going to have to bite the bullet some day. Meanwhile, it’s my job to provide an alternative pud for the big day. I’ve tried all sorts over the years, but the favourites are always trifle and my cheesecake surprise.

spiced prune chocolate pots with amaretto via Tin and Thyme

We tend to stick to the tried and tested when it comes to drinks. We’ll have a glass of mulled cider or mulled wine before the main meal, some fizz to go with the meal itself and maybe some sort of Irish cream drink in the evening. But in case you want something a bit different, here are a few Christmas drink recipes you might like.

mulled cider or mulled apple juice via Tin and Thyme

No Christmas is complete without a Christmas cake, even if it doesn’t actually get sliced until Boxing Day. If traditional Christmas cake isn’t your thing, there’s lots of enticing alternatives that can be made just a day or two before needed.

Personally, I find Christmas cake a bit too rich and heavy, although I love the marzipan. I infinitely prefer lighter fruit cakes that don’t need to be made weeks in advance. Or how about a roulade filled with all sorts of deliciousness?

You can’t have Christmas without chocolate. It starts with the Christmas stocking and goes on for the rest of the day. Or it does in CT’s case anyway. Homemade chocolates and fudge are generally much nicer than commercial offerings. They don’t need to be nearly as sweet and sickly, they’re not full of e-numbers and you can add all sorts of interesting flavours and touches.

I don’t make fudge very often as we always get a pack of homemade Bailey’s fudge from one of my aunts, although I do have one recipe for chilli chocolate fudge which is rather good. If that doesn’t suit, there are plenty of other delicious fudge recipes out there. I do, however, usually knock up a box or ten of chocolates. And really, what would you have with your post Christmas dinner coffee, if you didn’t have chocolate?

whisky truffles via Tin and Thyme

ginger chocolates via Tin and Thyme

Eating all the leftovers on Boxing Day is definitely one of life’s pleasures. My stepfather used to throw a selection into the frying pan for Boxing Day breakfast, including any leftover Christmas pudding.

Cheese and crackers, however, are de rigueur. I use the term loosely, as I basically mean anything that goes with crackers. A cheeseboard with some chutney, juicy ripe fruit, dried figs,  nuts and anything else that grabs your fancy is great, but so is homemade pâté. We never seem to have room on Christmas day itself for cheese and crackers; we’re always completely stuffed from the main event, so I look forward to this treat with great anticipation.

festive baked camembert via Supper in the Suburbs

So after sifting through this lot, the big question is, what have I left out? What are your favourite vegetarian or vegan Christmas recipes? Do tell by commenting below. I really enjoy reading about what people are preparing and eating over Christmas and I’m always up for new ideas.