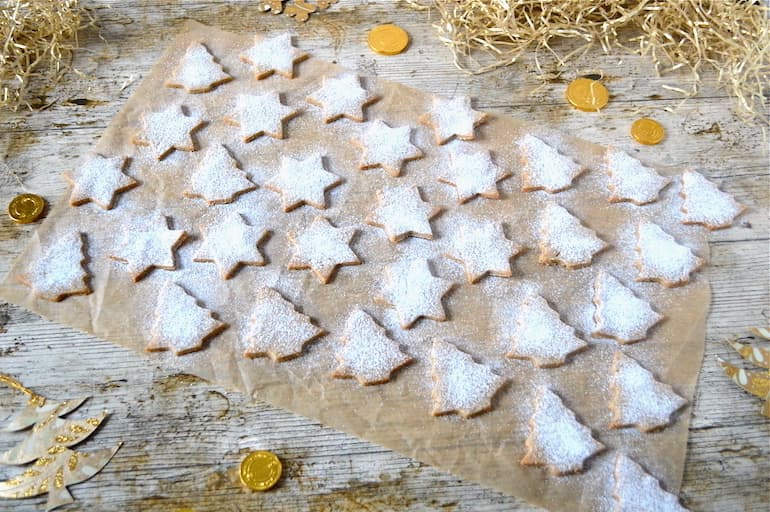 Well, Christmas is nearly upon us and this will be my last post now until next year. So I’m leaving you with these delicious Christmas shortbread biscuits.

I usually make a ton of festive biscuits to gift to friends, family and neighbours, but I’ve been running really short of time this year. I made some gluten free chocolate pistachio biscotti and also some Christmas bliss balls a few days ago and thought that would be it. But Christmas really isn’t quite right without shortbread and I’ve still got nothing for the neighbours.

Gosh, they’re good!. CT’s just come in and demolished several. I had to tell him to stop or there would be none left for the neighbours. The chestnut flavour is a little understated, but it does contribute to the rather lovely texture. Rodda lodda loveliness.

Thanks for visiting Tin and Thyme. If you make these festive shortbread cookies, I’d love to hear about it in the comments below. And do please rate the recipe. Have you any top tips? Do share photos on social media too and use the hashtag #tinandthyme, so I can spot them.

If you’d like to see more biscuit recipes, just click on my biscuits category. And for more Christmas gift ideas take a look at my gifts category. All delicious of course.

I wish you all a Very Merry Christmas and a Happy New Year.

Adapted from Rodda’s Clotted Cream ShortbreadIf you don’t have any chestnut flour, just regular flour instead.Please note: calories and other nutritional information are per serving. They’re approximate and will depend on serving size and exact ingredients used.

I’m sharing these festive stars and trees with Recipes Made Easy for #CookBlogShare.