Succulent pieces of candied orange peel. You can either roll them in sugar or dip them in chocolate to make delicious gifts. Snip them into pieces and they’re excellent used in baking as a homemade version of mixed peel. 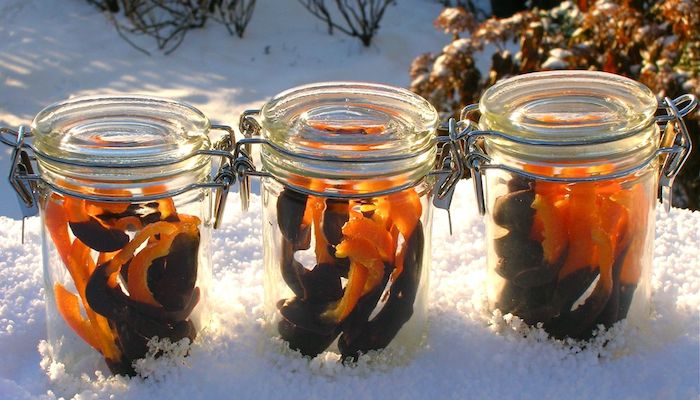 The inspiration for this candied orange peel confection came from Black Book Kitchen Diaries. I was sold the moment I saw the pictures. Not only did they make it onto my Christmas gift list, which is always rather hopeful but impractically long, but I actually managed to make them too.

It’s not difficult to make candied orange peel, but it is time consuming. The first time I made it, I halved the oranges and squeezed out the juice. I then tried to remove as much of the innards as I could whilst trying to leave as much pith on the peel as possible. This was not the best method and I strongly advise you not to try it.

I’ve made candied peel several times since, however and the process I use now is much easier and more successful.

I like a little bitterness in my peel, but if you don’t, boil the peel for a little longer each time and do it four times rather than three.

These were wonderfully succulent the day after I put them up for drying, but I thought they needed a bit longer so that they wouldn’t stick together in the jars. Unfortunately, I managed to forget about them for 4 days – oops! Luckily, the candied orange peel was still edible and still very tasty, but it veered more to the chewy than the succulent.

Despite being soaked in syrup, these really aren’t too sweet. They’re very orangey but with a hint of bitterness which complements the chocolate well. They ended up being everyone’s favourite gifts in their Christmas hampers.

Although, this was a fiddly job and not my favourite sort of kitchen activity, the result was so good, I shall be making these again.

The chocolate I used from Pierre Marcolini was a 78% grand cru trinitario from Cuba and it was delicious; a fantastic melt in the mouth experience. It had a fruity aroma and fruity notes when it first hit the tongue.  This was followed by notes of butterscotch and finally coffee.

Melting the chocolate was a wonderful nose experience and the kitchen smelt delightful for a long time after. I was very impressed with this Marcolini chocolate.

When I made candied orange peel again, I peeled the oranges rather than squeezing them first, This worked much better as the peel is cleaner. This time around I dried them for 24 hours only which made them much juicer. I then rolled them in caster sugar before storing.

This latter method for making candied orange peel also works for lemons. When a recipe calls for mixed peel, use a mixture of both cut into small pieces. It’s a whole heap nicer than commercial mixed peel.

I’ve tried it with limes too, but limes are very thin skinned and don’t have much in the way of pith, so they weren’t a roaring success. I’ve also made candied grapefruit peel. Grapefruit is incredibly bitter, so although it can be done, it takes a lot of water changes before you have something acceptable.

Thanks for visiting Tin and Thyme. If you try this making candied orange peel, I’d love to hear about it in the comments below. Have you any top tips? Do share photos on social media too and use the hashtag #tinandthyme, so I can spot them.

I like a little bitterness in my peel, but if you don't, boil the peel for a little longer each time and do it four times rather than three.Please note: calories and other nutritional information are per serving. They're approximate and will depend on exact ingredients used.