Biscuits, Christmas, Gifts, We Should Cocoa | 14th December 2012 | By Choclette

Festive biscuits that won’t let you down. They’ll keep for a few days without going soft, you can decorate them to your hearts content and they taste delicious. You can even hang these cinnamon & honey Christmas stars on the tree. They make great gifts too.

To get us all in the festive spirit, assuming we needed encouragement of course, I chose cinnamon for this month’s We Should Cocoa. I had a few ideas for this, but in the end I went for these Spicy Stars, adapted from the brilliant Polish Spice Biscuits that I made last year. This is a family recipe from Ren Behan and combines some wonderful ingredients which produce absolutely fabulicious biscuits. They are really quite different from the normal festive gingerbread type of fare as these use rye flour, honey and most importantly cocoa.

One of the sub groups of the Liskeard Portas Pilot (of which I’m a member) organised a Vintage Christmas Market. We held it last weekend. Luckily, it was a great success. Lots of people milled about dressed in vintage clothing, there were fabulous stalls, toe tapping live music, a cafe and a great turn out. 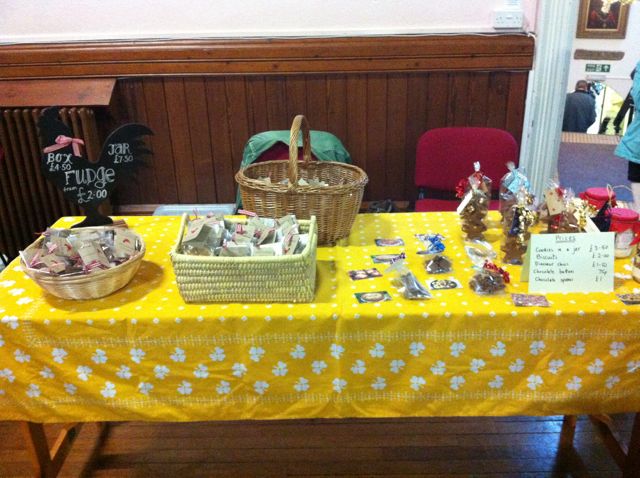 I had the pleasure of acting as stall-holder for The Gingham Chicken, a fine producer of delicious Liskeard Cornish fudge. It seemed like a good opportunity to make and sell a few festive treats myself. These cinnamon & honey stars were one of them.

The biscuits turned out just as I hoped. They looked pretty, had a perfect firm texture and tasted of cinnamon and honey. They brought an added bonus too: the whole house smelt of sweet spicy cinnamon for days. Who needs air freshener?

I made up eight packs of ten biscuits then tied them with a ribbon and a name tag. They all sold.

The biscuits could of course be iced, dipped in chocolate or decorated in any number of ways. But I think they are pretty much perfect just as they are.

If you’d like to use them as Christmas decoration, just poke a whole through one of the arms with a skewer before baking. You might need to … the hole once they come out of the oven. Then just thread some ribbon through the holes and hang on the tree.

Thanks for visiting Tin and Thyme. If you make these cinnamon & honey Christmas star biscuits, I’d love to hear about it in the comments below. Do share photos on social media too and use the hashtag #tinandthyme, so I can spot them.

These cinnamon and honey Christmas stars are my entry for this month’s We Should Cocoa.

As my alternative name for these biscuits is Spicy Stars, I’m also submitting them to Alpha Bakes where the letter is S this month. This challenge is jointly hosted by The More Than Occasional Baker and Caroline Makes.

These Christmas cookies are, of course, made from scratch. So they are also being sent to Javelin Warrior for his weekly Made with love Mondays.