The best vegan stuffing with all the comfort and familiarity of traditional stuffing, but packed with protein and flavour too. Bake in a tray, or shape into balls. Whether you‘re vegetarian, vegan or carnivorous, you’ll love this chestnut and tempeh stuffing. 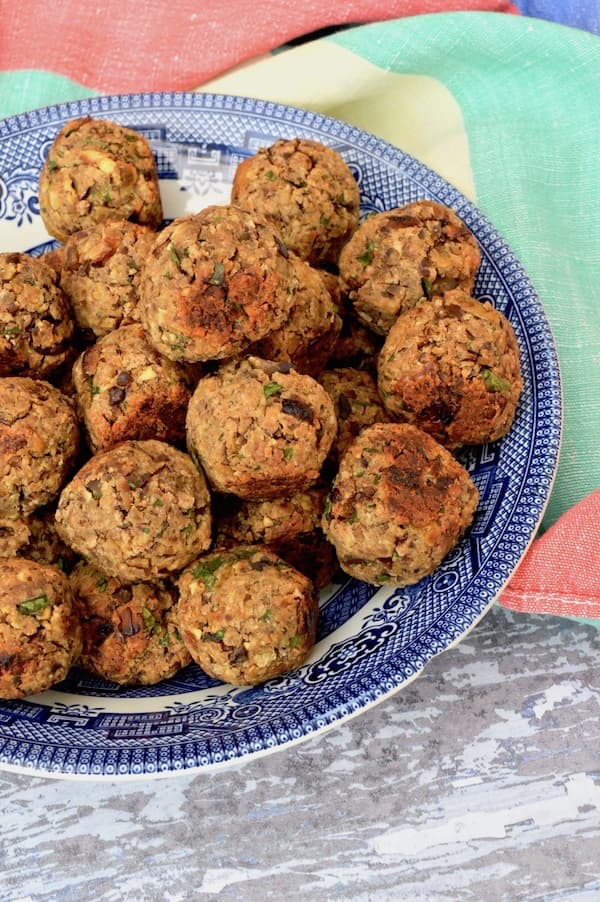 My vegan stuffing is based on traditional chestnut and bacon stuffing which is flavoured with both thyme and parsley. I’ve swapped the bacon for tempeh, which is the closest ingredient I’ve come to bacon in terms of flavour and crispness. Just fry very thin slices of bacon in oil until crisp and you’ll see what I mean. Even more so if you marinade the tempeh slices in soy and smoked paprika first.

Vegan Stuffing with Chestnuts and Tempeh

This recipe for chestnut and tempeh vegan stuffing is incredibly easy to make. It’s not only delicious, but it’s nutritious too and contains plenty of protein, something often lacking from vegan festive feasts.

The ingredients are all pretty straight forward. Tempeh used to be hard to track down, but it’s widely available these days and most supermarkets should sell it. For the chestnuts, I use a vacuum pack of ready prepared ones. I had a go at cooking and peeling chestnuts for a recipe once, but never again. Life’s too short.

Apart from frying the onion and tempeh, the only prep you need to do is to pulse all of the ingredients together in some sort of machine. Easy peasy.

I’ve chosen to form the mixture into balls prior to cooking, but this takes a bit of additional time and is a teensy bit fiddly. So if balls are not for you, just pack the mixture into an oiled oven-proof dish instead.

Pop the stuffing into the oven and job done.

The easiest and quickest way to cook stuffing is to cook it in a greased ovenproof dish. You can either cover it with foil if you want the stuffing to remain soft, or for a crusty top just bake uncovered.

However, I like to make stuffing balls rather than bake my vegan stuffing in a dish. This makes the stuffing more versatile and they look prettier too. You also get crispy bits on the outside with a soft and chewy inside. You can freeze any leftovers or reheat them for later use much more easily. But it is more of a faff as it takes time to form the stuffing into balls.

For a particularly crispy finish, roast the stuffing balls rather than bake them. Pour some sunflower oil into a roasting tray and place into a hot oven five minutes before you add the balls. Toss them in the hot oil then pop them in the oven pronto. Otherwise, just place on a baking tray, lined with baking paper or a silicone mat.

Whatever way you want to cook them, they need to be in a hot oven for thirty minutes. If you’re making stuffing balls, turn them over half way through.

How Long do Stuffing Balls Take to Cook?

Stuffing balls take thirty minutes to cook in a hot oven. Turn them half way through the cooking time and you’ll end up with crisp on the outside, soft and chewy on the inside – stuffing ball perfection.

Can You Freeze Stuffing Balls?

Yes, you can freeze stuffing balls. No problem at all. Make them ahead of the big day and once cooked, place on a tray and freeze for an hour or so. Once frozen, place in a bag or bags. They’ll keep well for a couple of months. Thaw in the bag, then bake in a hot oven for ten minutes.

A Vegan Christmas or Thanksgiving Dinner

If you’re stuck for ideas as to what to serve alongside these chestnut stuffing balls for a delicious and satisfying vegan Christmas or Thanksgiving dinner, I’ve got it covered.

For more festive recipe ideas, head over to my post on all the vegetarian and vegan Christmas recipes you could wish for.

Thanks for visiting Tin and Thyme. If you try this delicious vegan stuffing, I’d love to hear about it in the comments below. And do please rate the recipe. Have you any top tips? Do share photos on social media too and use the hashtag #tinandthyme, so I can spot them.

If you’d like even more festive recipes, follow the link and you’ll find I have quite a lot of them. All delicious, of course.

Vegan Stuffing with Chestnuts and Tempeh – The Recipe

Vegan Stuffing with Chestnuts and Tempeh

Instead of baking or roasting the stuffing separately, you can use it to stuff vegetables or the main event itself.Please note: calories and other nutritional information are per serving. They’re approximate and will depend on exact ingredients used.

I’m sharing this recipe for homemade chestnut and tempeh stuffing balls with Curly’s Cooking for #CookBlogShare.