A recipe for homemade chilli chocolate mincemeat that you can easily adapt to suit your own taste and what is available in the cupboard. The chilli and chocolate take mincemeat up to a whole new level. They give extra depth, richness and spice, without either being easily identifiable. 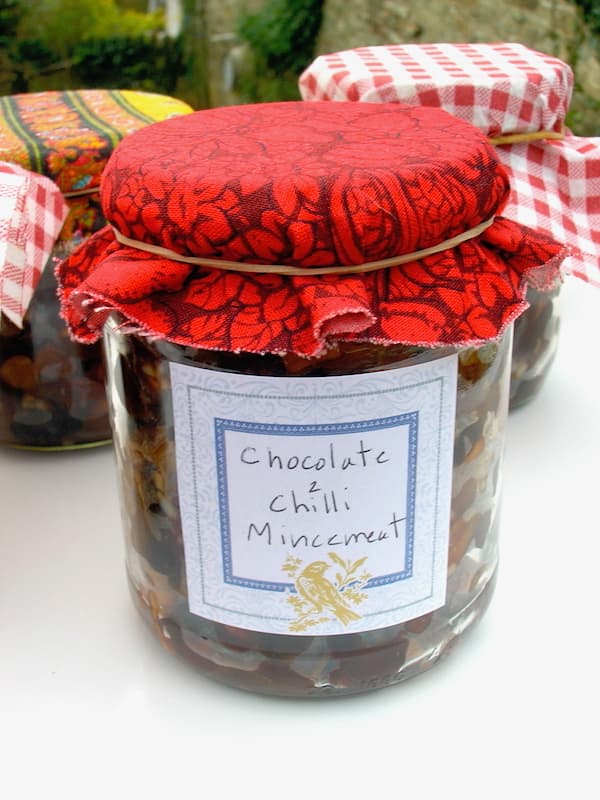 Homemade mincemeat is a revelation. Once you’ve made it, it’s hard to go back to a commercial product. Even inveterate mincemeat sceptics like CT are happy to dig into my mincemeat recipes. In fact it was hard to keep his hands off the chilli and chocolate mincemeat slice I made last year.

So in time for Stir-up-Sunday, the last Sunday before Advent, I had all of my ingredients ready for their final stir. This auspicious day is traditionally the time to make Christmas puddings. It gives them ample time to mature before the big day. Families gather in the kitchen to have a stir and make a wish. I wasn’t making Christmas puddings, but it’s a good time to make mincemeat too for the same reason. We gave a good stir and made a wish anyway, then jarred it all up.

Stirring up the mincemeat was a really good antidote to a disappointing week. Much of the South West is flooded due to the heavy rains we’ve been experiencing recently. This meant that the trains have been seriously disrupted. So I was unable to attend the chocolate conference that I’d taken the day off work for. Not only that but I also couldn’t get to a spend the day with Chantal Coady at her chocolate factory.

Two years ago, I made my first ever chocolate mincemeat. It was a great success. Last year, I improved the recipe by adding chilli and prunes. This year I did something different again, although I retained those three ingredients as they have now become integral to my homemade mincemeat recipe. I added my own homemade mixed peel, some of the mint vodka I made back along and one of our rare chillies that actually ripened in the excuse for a summer we had this year.

Of course, you don’t have to use mint vodka in this chilli chocolate mincemeat. Brandy, rum and whisky all work really well. I know I’ve tried them. One year I made it with Amaretto which was good too. I also have a recipe for lemon & ginger mincemeat where I’ve made ginger wine the star of the show.

Basically, it’s a question of using up whatever dried fruit I have lying around in my kitchen cupboards. I happened to have a lot of sultanas and also a bag of mixed berries, but no currents and not many raisins. Some marinade their mincemeat and some don’t. I’m in the former category and like to steep mine for five days before spooning it into jars. Who needs air fresheners when you have a bowl of fruit marinading in alcohol and spices? The house is nicely fragranced for several days.

So, as last year, I threw the following ingredients into a bowl, gave a good stir, covered with a plate and left for 5 days, stirring once a day. Packed into four sterilised 1 lb jars, then sealed with waxed discs and lids. I used some of the lovely vintage labels that the even lovelier Susan of A Little Bit of Heaven on a Plate sent me recently after I entered her home made and well preserved challenge.

The sweet and spicy aroma emanating from the bowl was intoxicating and when I did, err, lick out the bowl afterwards, I was extremely pleased with the results. It does provide an opportunity for quality control after all and I can confirm that this chocolate chilli mincemeat is once again delicious. The mint vodka gave a hint of something different and the chilli was just about right, warming rather than overheating. The chocolate was an excellent addition and worked to give a slightly deeper and richer flavour and also prevented the mincemeat from being overly sweet. I can’t imagine ever wanting to buy mincemeat again.

Recipes To Use Your Mincemeat In

Thanks for visiting Tin and Thyme. If you make my chilli chocolate mincemeat or a version of it, I’d love to hear about it in the comments below. Do share photos on social media too and use the hashtag #tinandthyme, so I can spot them.

Best made a few weeks before Christmas and if stored well, should last a year.24 hrs for soaking is the minimum time. I soak my mincemeat for 5 days, giving it a good stir every day.Enough to easily fill 4 1 lb jars or 3 ½ litre kilner style jars.Please note: calories and other nutritional information are per serving. They're approximate and will depend on serving size and exact ingredients used.

I had several chocolate mincemeat posts, but as they were all very similar, I’ve kept the best one, which is this one. I shared my first recipe, back in 2011, with the apple themed We Should Cocoa. As I’ve now deleted the post, I’m using this recipe link instead. It still contains a lot of apple.