A delicious no-bake cheesecake with a surprise chocolate layer hidden below the surface. You’re guaranteed to get plenty of oohs and ahhh with this chocolate and lime cheesecake surprise. The combination of salty biscuity crumb, sweet chocolate and tangy cream filling is a particularly good one. 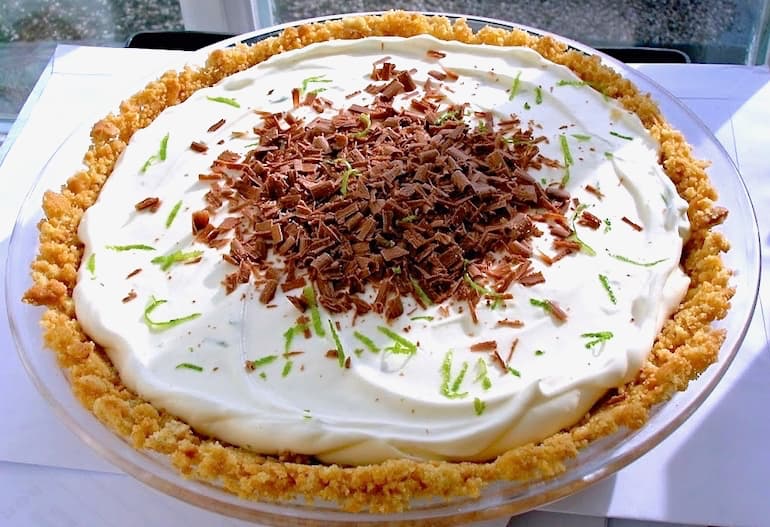 Party going family members en route from Gloucestershire to Falmouth, thoughtfully stopped by for lunch at the weekend. It was time to revive an old favourite. I used to make this chocolate and lime cheesecake surprise for Christmas and when entertaining, but for some reason, it fell off my radar.

Scouring my memory for the recipe proved more difficult than I’d expected. Quantities were the problem rather than ingredients. Luckily, one of the beauties of this recipe is that you can play around with both quantities and ingredients to suit evolving tastes.

The original recipe came from one of my aunts, way back in the mists of time. It contained no lime, but used hazelnut yoghurt instead of plain. I changed this and for a long time, I used plain yoghurt and chopped roasted hazelnuts. But it has been undergoing a slow metamorphosis over the years.

Sometimes I use plain chocolate, sometimes milk. I’ve also incorporated the chocolate directly into the cheesecake mixture rather than having it as a separate layer. This latest incarnation replaces the original hazelnuts with lime. It’s the best one yet.

This was as good as I remembered and was a real hit with my visitors. The chocolate layer always comes as pleasant surprise and it elicited the usual oohs and ahhs that I’ve come to expect with this fabulous creation. The combination of salty biscuity crumb, sweet chocolate and tangy cream filling is a particularly good one.

The flavour of lime permeates the whole cheesecake, despite the small quantities involved. Why, I wonder has it been so long since I last made it?

When you’re creating the biscuit layer, try and press the crumbs down as hard as you can so that you have as even and firm a layer as possible. I tend to get a bit fidgety at this point. You can probably tell by the photos that my patience didn’t run the course on this particular occasion. But it’s worth persisting if you can, so that you get a clean slice when you cut into the cheesecake.

I usually make this surprise chocolate and lime cheesecake with milk chocolate. But it’s absolutely fine to use dark chocolate. I sometimes do. It’s all very much dependent on mood. As it’s fairtrade fortnight, I used Divine for a change, instead of my usual Green & Black’s.

You can add a little more sugar to the cheesecake layer if you don’t think it’s sweet enough. I find the milk chocolate is already quite sweet and the not-so-sweet cheesecake mixture acts as a nice foil. However, if you use plain chocolate, it’s a good idea to double the quantity.

Thanks for visiting Tin and Thyme. If you make this surprise chocolate and lime cheesecake, I’d love to hear about it in the comments below. And do please rate the recipe. Have you any top tips? Do share photos on social media too and use the hashtag #tinandthyme, so I can spot them.

If you’d like more lime recipes, follow the link and you’ll find I have quite a lot of them. All delicious, of course.

You can use more sugar if you like, but the milk chocolate is already quite sweet and it’s nice to have a foil for it.