Earl Grey fruit cake with orange icing makes an ideal last minute Christmas or celebration cake. It’s a delicious, flavoursome fruit cake which is easy to make and isn’t too rich or heavy. The fruit is soaked in Earl Grey tea prior to baking. 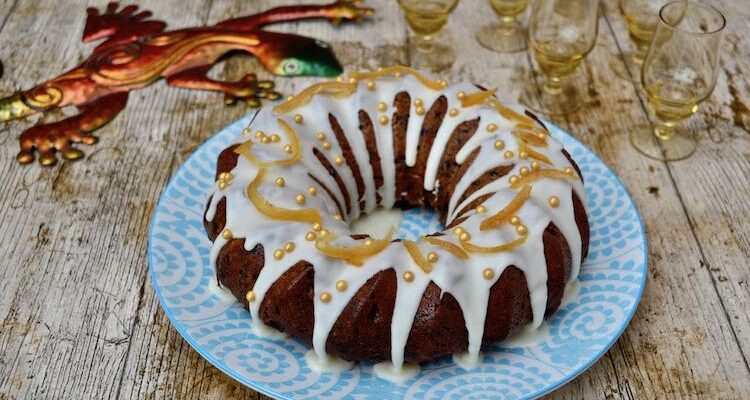 I’ve been following Karen Burns-Booth fabulous food blog, Lavender & Lovage, pretty much since its inception. Now, we have the cookbook, newly published this month, Lavender & Lovage: a culinary notebook of memories & recipes from home & abroad. This Earl Grey fruit cake is my jazzed up version of an old family recipe from Karen.

Read on for my review of the book and my version of the recipe.

The book Lavender and Lovage is an outward manifestation of the author’s personality and her blog. It’s exuberant, evocative and informative in equal measures. The pages are not only full of reliable family recipes, but they’re also stuffed with fascinating tips, historical facts and anecdotes from Karen’s life.

Recipe inspiration comes mostly from family members and her travels. She has lived in more places than anyone else I know. There were even a couple of years in Cornwall when she was a teenager. Ironically, she was only a few miles away from me, on the other side of Bodmin Moor.

I tend to think of Lavender and Lovage as a baking blog; I got to know Karen initially through my link-up, We Should Cocoa and later through her own Tea Time Treats.

Her bakes are mostly good old-fashioned pies, cakes and biscuit recipes that have withstood the test of time. Jumbles, stotty cake and fat rascals are some of the regional recipes from around the UK that Karen specialises in and documents so well. You’ll find these three recipes, as well as many others, in the book.

There’s a lot more to Lavender and Lovage than bakes, however. You’ll find plenty of soups, salads, main meals, puddings, preserves and more. The book starts with breakfast and brunch recipes.

Woohoo, I do love a good breakfast. I think I’ll have ‘teacup’ porridge followed by bubble and squeak cakes, or maybe a Sri Lankan egg hopper? Hang-on, I’ve just spotted the traditional Cypriot breakfast – too much choice.

The book goes on to cover soups, starters & snacks under the rather appealing title of Beginnings & In-Betweens. Here you’ll find such delights as Turkish lentil soup with lemon, First Nations ‘Indian tacos” and Welsh rarebit.

Here we learn that celery was originally regarded as a medicinal plant as it was extremely bitter. It didn’t become a ‘vegetable’ until the 15th Century when a sweeter and more tender variety was developed.

Middlings, otherwise known as main courses comes next. These are mostly meaty, but there is a vegetarian section offering up seven appealing recipes. Mushroom, chestnut and thyme pithivier pie was the first to catch my attention; I take after my mother in this regard and am unable to resist a good pastry.

A Bit on the Side covers salads & accompaniments. Mum’s crispy squashed chips and Boston baked beans would do me, but maybe I ought to go with something a bit healthier – frazzled kale and frisée salad with pomegranate & persimmons perhaps?

Pastry is the Best

Now to my favourite chapter, pies, pasties & tarts, otherwise known as Under Cover & Exposé. But where to start? Cheese, potato and celery pasties perhaps? Or maybe wild garlic & English blue cheese tart. And do I finish with Cumberland rum nicky or English walnut tart with orange pastry or bilberry plate pie? Decisions, decisions.

It doesn’t get any easier in the next chapter either, Endings aka hot & cold puddings. I think I might have to go for the easy option of Irish cream chocolate mousse.

I’ve sort of covered Home on the Range which includes bread, scones, cakes & biscuits. It was from this chapter that I chose this recipe for Earl Grey fruit cake with orange icing. In the book it’s called teacup farmhouse fruit cake.

I’ve taken the liberty of renaming the bake to reflect my slightly jazzed up version. I took it along to my first Clandestine Cake Club event here in the New Forest. The theme was Christmas and when I read that Karen’s mum had been known to bake this as a last minute Christmas cake, my choice was made.

Moving on from the delights of baking, we have On the Shelf which covers jams, chutneys, pickles & marmalades. As a keen pickler and maker of jams, I was happy to see classic recipes such as blackberry jam alongside less familiar ones such as pickled green walnuts.

The final chapter, Méli-mélo is French for a “mess of things”. It’s an assortment of recipes of particular significance to Karen that she felt she just couldn’t leave out. Fiona’s frying pan pizza and Amah’s cold sweet rice are two of the recipes in this chapter and they both come from Karen’s childhood days.

As the name Lavender and Lovage suggests, herbs are never far away in Karen’s recipes. She used to host a Herbs on Saturday link-up on her blog. It’s sorely missed. Wild garlic, lemon & lovage soup, heirloom tomato & chive flowers salad, and cheese, spinach and dill filo pie are just a few of the herby recipes to be found in the book. Gosh, but I nearly missed French set apricot & lavender confiture – now that would have been truly remiss of me.

As for the photographs that illustrate the recipes, well! They are gorgeous and Karen has taken every single one of them herself. My snaps of the photos in the book really don’t do them justice, so head over to her blog and you’ll see what I mean.

The front cover itself is evocative and is taken from a linocut that was designed by artist Callie Jones. It represents the old Welsh schoolhouse where Karen now lives along with the flora and fauna that surround the house. Karen is there too with her basket of foraged herbs alongside her husband Malcolm and their two cats.

I’ve made several of Karen’s recipes from her blog over the years and they’ve always turned out well. These little Dundee cakes are firm favourites and they make lovely festive gifts at this time of year. I was really pleased with how my orangey Earl Grey fruit cake turned out too. It’s a recipe I shall be repeating.

Apart from preferring to have more vegetarian recipes in the book and less meaty ones, I’m absolutely delighted with my copy of Lavender and Lovage. It’s going to keep me happy for many nights of bedtime reading and days of cooking in the kitchen.

This renamed Earl Grey fruit cake with orange icing is a slight adaptation of Karen’s teacup farmhouse fruit cake recipe. I used wholemeal flour instead of plain and drizzled the top with some orange icing to give it a festive air. Other than that, I followed the recipe to a ‘tea’.

What an easy cake it is to make. No creaming hard winter butter, or whipping up egg whites here, it’s pretty much just a case of stirring. Ideal when you’re in a hurry.

The only thing you have to remember is to soak the fruit in the tea for a few hours before you want to bake the cake, preferably overnight. This bit is important as you want the fruit to be nice and juicy in the finished cake. Once this is done, it’s a simple process of adding the other ingredients and popping it into the oven.

The original recipe is for a loaf. I used my silicone bundt mould, so it didn’t need quite as long in the oven as the recipe below states.

The cake was absolutely delicious with a pronounced orange flavour and a fabulous texture. I can’t honestly claim that I could taste the Earl Grey, but knowing it’s there gives the cake a certain level of sophistication. Karen reckons it has a certain toffeeish quality and I’m inclined to agree with her.

It went down very well at Cake Club. I can now confirm that it really would make a great last minute Christmas cake. It’s not nearly as rich and dense as a traditional Christmas cake, but I reckon it would be more popular.

Thanks for visiting Tin and Thyme. If you make this Earl Grey fruit cake with orange icing, I’d love to hear about it in the comments below. And do please rate the recipe. Have you any top tips? Do share photos on social media too and use the hashtag #tinandthyme, so I can spot them.

If you’d like more fruit cake recipes, follow the link and you’ll find I have quite a lot of them. All delicious, of course.

Karen suggests spreading slices with butter, honey, jam or marmalade. But I suggest that would be for the un-iced version. She says it’s also delicious when eaten warm.Always use hot tea, as this makes the fruit plump up more.Please note: calories are per serving. They’re approximate and will depend on exact ingredients used.

I’m sharing my version of Karen’s ‘teacup’ farmhouse fruit cake with Easy Peasy Foodie for #CookBlogShare. It also goes to Mummy Mishaps for #BakeoftheWeek and Searching for Spice for #CookOnceEatTwice.