Make your own edible gifts with this recipe for smooth and creamy chilli chocolate fudge. It’s so good though, you might just want to keep it all to yourself. It combines the richness of dark chocolate with the unctuous mouthfeel of cream followed by a warm afterglow from the chilli. 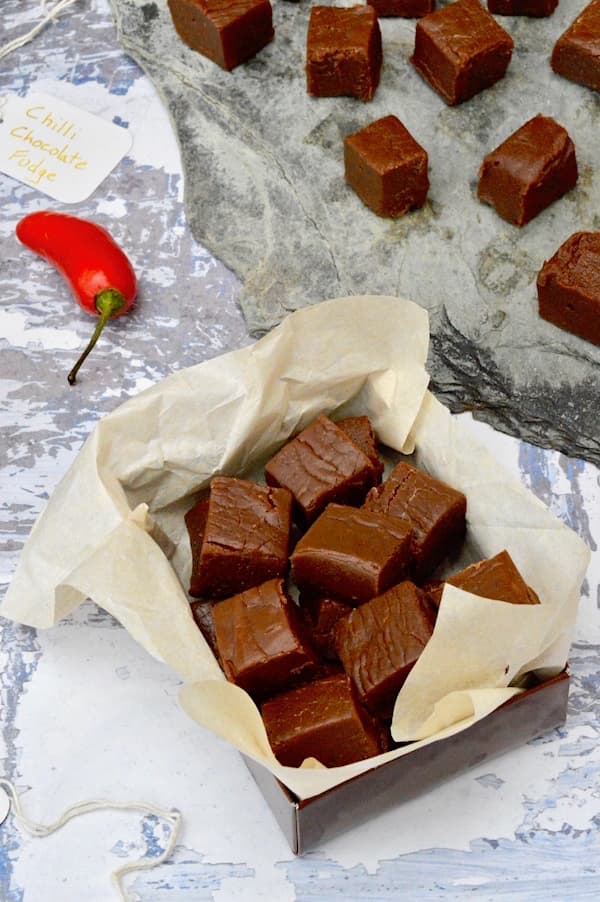 Growing up in Cornwall, it’s difficult to escape the siren call of fudge. After all Cornwall is dairy country extraordinaire and artisan fudge makers abound. Along with Cornish fairings and clotted cream, fudge is something visitors often take home with them. I may be a little bit biased, but it’s hard to beat a piece of Cornish fudge. Unless that is, you make your own.

In our family, one of my aunts is the Queen of Fudge. She used to make a vast vat of Bailey’s fudge every year which she gifted to everyone. We all looked forward to a bag of her fudge at Christmas. Sadly, she’s now in a nursing home and it’s been a couple of years since we’ve enjoyed her fudge.

I’ve made many variations of fudge over the years, some firm and almost crumbly and others smooth and creamy. I don’t really have a favourite, I just like traditional homemade fudge.

It’s a lot easier to make than you’d think. And it really doesn’t take long either. Once you’ve dissolved the sugar in the milk, it only needs to boil for five to ten minutes and it’s done.

Homemade Fudge as a Gift

Homemade fudge makes an ideal gift as it keeps well in an airtight container for at least a month. This means it’s particularly suitable for Christmas gifts, as you can make it in advance and get ahead of yourself if necessary.

It’s also quite sturdy, so it’s less likely to break up under the rigours of gift wrapping than some edible gifts.

But the main reason is that everyone loves fudge and Christmas is the perfect time for such indulgences.

Chilli chocolate fudge may not be to everyone’s taste. If you think it might be a bit too risky, scroll down to the section on how to make creamy chocolate fudge without the chilli.

The Secret to Creamy Homemade Fudge

The secret to good homemade fudge is in the beating, as well as the heating. Get it to the right temperature and success is guaranteed.

Use a large heavy bottomed pan so the heat is distributed evenly. This means the fudge is less likely to stick and burn and there’s plenty of room for it to rise up as it boils.

The longer you cook fudge, the harder the set. So a lot depends on what sort of texture you like best. It also needs to get to the right temperature. Too hot and and it will be grainy, too low and it will be too soft. It’s best to use a reliable sugar thermometer when you make fudge. If you don’t have one, however, you can use the cold water test instead. See below.

Before you get onto the beating stage, you need to allow the fudge to cool for ten to fifteen minutes. This helps the sugar crystals to remain small, which in turn leads to a smoother, creamier fudge.

Once it’s cooled, you need to beat it with a wooden spoon for about three minutes. Beating the fudge helps break down the sugar crystals, which creates that smooth and creamy texture that we love so much.

Have a glass of cold water at the ready and when the fudge has boiled for five minutes, drop a little into the water. If it forms a ball that you can pick up with your fingers without it disintegrating it has reached the soft ball stage, which means it’s ready. If it hasn’t, keep on boiling, testing every minute or so.

The first thing you need to do is steep the chilli in the milk. Use a hot chilli, remove the seeds and cut it into quarters. Gently heat the milk with the chilli quarters and allow to infuse for at least ten minutes. The longer you leave the chilli in, the hotter the fudge will be.

Add the sugar and place back over a gentle heat. Allow the sugar to dissolve, stirring occasionally. Once the sugar has properly dissolved, fish out the chilli pieces and discard.

Boil over a medium heat for five to ten minutes or until the temperature reaches 114°C (237°F). Alternatively use the cold water method to test. Stir occasionally to prevent the mixture from sticking and burning. As soon as the fudge is up to temperature, remove from the heat.

You really need dark chocolate for this recipe. As well as giving flavour, it also acts as a foil for the sweetness of the fudge. The darker the chocolate, the richer the fudge will be. I used a bar of 85% cocoa solids, but anything over 70% is good.

Add a little bit of butter at the end along with the chocolate. This helps to ensure the fudge is both rich and creamy. Leave it to cool for ten minutes.

Beat the fudge hard with a wooden spoon until it begins to lose its gloss and thickens. This can take anywhere between one and five minutes, so it makes for a good work out.

Pour it into a 20cm (8 inch) square buttered silicone mould or tin lined with greaseproof paper.

Leave the fudge to cool and set. This can take a few hours. Once it’s set, turn it out onto a wooden board and cut into squares.

All being well, you’ll end up with an irresistible, gloriously rich, sweet and warming confection with a silky mouthfeel – pure indulgence. The diet can wait.

For a milder and easier to make version of this chilli chocolate fudge, forget the actual chilli. Just use a bar of chilli chocolate instead. You won’t need to infuse the milk with chillies, so it makes the process quite a bit faster. If, however, you want a bit more heat, it’s best to use the chilli.

How to Make Chocolate Fudge

If you don’t like the idea of chilli flavoured chocolate fudge, you can of course just leave the chilli out. It will make the process of creating a batch of delicious creamy fudge a lot quicker as you won’t need to steep the chillies in milk at the beginning of the process.

But the fudge will need a little additional va va voom if you don’t include chilli. So follow the fudge recipe as stated below, but add a teaspoon of vanilla extract along with the chocolate.

For a richer chocolate flavour, you could also add some cocoa powder at the same time as the chocolate. Anything from a teaspoon to a tablespoon is fine, depending on how chocolatey you like it.

Thanks for visiting Tin and Thyme. If you make this chilli chocolate fudge, I’d love to hear about it in the comments below. And do please rate the recipe. Have you any top tips? Do share photos on social media too and use the hashtag #tinandthyme, so I can spot them.

If you’d like more edible gift recipes, follow the link and you’ll find I have quite a lot of them. All delicious, of course.

Have a glass of cold water at the ready and when the fudge has boiled for five minutes, drop a little into the water. If it forms a ball that you can pick up with your fingers without it disintegrating it has reached the soft ball stage, which means it’s ready. If it hasn’t, keep on boiling, testing every minute or so.

For plain chocolate fudge, omit the chilli and go straight to the stage for dissolving sugar. Add a teaspoon of vanilla extract along with the chocolate.

How Long Will Fudge Keep?

Will keep at room temperature in an air tight container for at least four weeks.Please note: calories and other nutritional information are per serving. They’re approximate and will depend on exact ingredients used.

I’m sharing this recipe for chilli chocolate fudge with Gluterama for #CookBlogShare.