Although apples are generally available all year round these days, they really come into their own in the autumn. The apple harvest has started and Apple Day is just around the corner. Here you’ll find plenty of inspiration on how to use them with a whopping 80 seasonal and delicious apple recipes to make. Some are from Tin and Thyme and some are from others in the food blogging community. 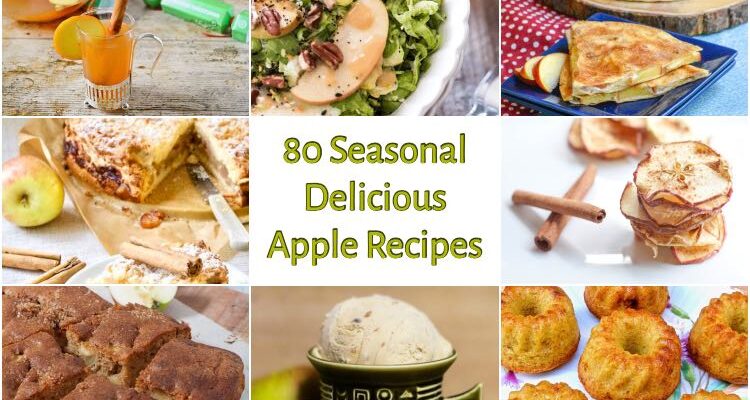 Apple Day falls on October 21st. It’s a celebration of autumn in general and the apple harvest in particular. It was started by Common Ground in 1990 to raise awareness of the loss of orchards and apple varieties. There’s a vast range of events happening up and down the country to celebrate this most marvellous of fruits.

Here in the New Forest, there are apple pressings and cider making and the good folks of Lymington leave boxes of excess apples outside their front door for people to take. Apple Day is such a highlight here at Tin and Thyme, that we have a board dedicated to it on Pinterest. There you’ll find hundreds of apple recipes and you’ll never lack for inspiration again.

80 Seasonal and Delicious Apple Recipes to Make This Autumn

Apple cake, apple crumble and apple pie are absolute must bakes in autumn, but why stop there? Apples are versatile and there are so many other ways to use them.

With these 80 seasonal and delicious apple recipes to make this autumn you can pick up plenty of ideas for classic apple bakes as well as more contemporary recipes. There’s pretty much everything here from the healthy to the indulgent, from full on dairy, to vegan, to paleo and gluten-free. You should find something to suit every one and every apple occasion.

You can pretty much guarantee that come autumn, you’ll find a recipe for apple cake on Tin and Thyme. Apple season just isn’t right without a good cake made out of Eve’s favourite fruit. I haven’t added all of my recipes here though, instead I’ve picked a few of the best along with a selection of others.

Dorset apple cake with chocolate caramel via Tin and Thyme

Apple crumble and custard mini cakes via Tin and Thyme

The best baked caramel donuts via My Menu Pal

Easy apple and cinnamon traybake via Recipes Made Easy

Apple, rose and white chocolate cake via Tin and Thyme

Caramel apple poke cake via Cooking With My Kids

Bonfire Night, is a rather macabre British celebration where we burn effigies of the renegade 16th Century Catholic, Guy Fawkes. That aside, it’s a jolly occasion with lots of fireworks and food. Apples are particularly associated with it and you can’t have a bonfire without a toffee apple.

And what could be better after a cold and crisp autumn walk than warm apple scones straight from the oven? Scones are incredibly easy to make and they’re always a filling crowd pleaser.

Apple cider scones with cinnamon via Tin and Thyme

Apple and honey oat scones via My Kitchen Love

Cookies or biscuits made with apple may not be an obvious choice, but one of my favourite flapjack recipes includes apple in the ingredient list. Here you have two to choose from and they both sound good.

I usually use the abundance of autumn apples to make lots of apple purée. This keeps in the fridge for months and we use it to top porridge when the days start to get cold. There are lots of other ways to use apples for breakfast though. I’ve got my eye on those quesadillas.

And of course apples work brilliantly in all sorts of savoury dishes too. Here you’ll find some ideas from salads, to soups, to bread.

Paleo blender pumpkin soup (with apple) via I Heart Umami

And if you want some bread made with apples to accompany the soup, here are a couple to choose from as well as some savoury muffins.

These 80 seasonal and delicious apple recipes would not be complete without a good selection of puddings and desserts. Here you’ll find some good old comfort food as well as a few healthier recipes. There’s even ice cream.

Eve’s pudding via Lost in Food

Devonshire apple In and Out pudding via Bright Kitchen Tales

Granny’s apple pie with wholemeal pastry via Tin and Thyme

Blackberry and apple crumble pie via The Hedge Combers

Baked custard tart with spiced apple via The Fare Sage

Caramel apple popcorn via As Strong As Coffee

Well of course everyone knows about cider; it’s the brew of choice in Cornwall where I come from. In fact you’ll find cider apples growing all around the South West of the UK. Have you tried mulled cider instead of mulled wine? I’d highly recommend it. There are, however, plenty of other apple drinks to be had. Here are a few of them.

Mulled cider or mulled apple juice via Tin and Thyme

Apple Mac via Tin and Thyme

Preserving apples is a great way to use up any apple glut and enjoy the fruit all year around.

Well that brings my collection of 80 seasonal and delicious apple recipes to make this autumn to a close. I hope you’ve found something to whet your appetite. Do let the relevant blogger know if you make any of their recipes. We food bloggers always appreciate feedback.