These delightful little apple cakes are lightly spiced with cardamom and full of autumnal flavour. They’re made with Mediterranean honey, which gives them an aromatic stickiness to the light sponge. If you only make one apple bake this autumn, make it these honey apple cardamom mini bundt cakes.

Some say Autumn starts here in the Northern Hemisphere on 1 September, some say the 22nd. Either way the apple season has started and to me that means one of my favourite times of year with morning mists, clear warm days and cold nights – if we’re lucky. The first few apples have been gathered from my mother’s garden and honey apple cardamom mini bundt cakes were calling.

On one of those perfect autumnal days, last weekend, we visited friends and sat outside at lunchtime in shorts and t-shirts eating a veritable feast and indulging in these little honey apple cardamom mini bundt cakes. Our friends are Italian and I wanted to give a nod to their country in this bake.

It was time to break open the honey I received from Ufuud last year. I’d been saving it for a special occasion. It was powerful stuff with a strong Mediterranean fragrance about it. I only used a small amount, but it not only gave a delightful stickiness to the cakes, but a deeply flavourful aromatic quality. The Cornish apples offered a tart piquant note and the cardamom added a hint of mystery. These cakes have made it to the top of my must-make-again list and I suspect this might happen very soon.

I’ve long admired Dom’s mini bundt cakes and have been on the look out for some moulds. It’s taken a while, but I am now the proud owner of one six bundt mould via Wayfair. This bake was its first outing and I was delighted with the results. I had planned on icing the cakes, but they looked so pretty when they came out of the mould and were in any case sticky from the honey, they really didn’t need it. As I only had six bundt spaces, I used six small muffin cases for the rest. 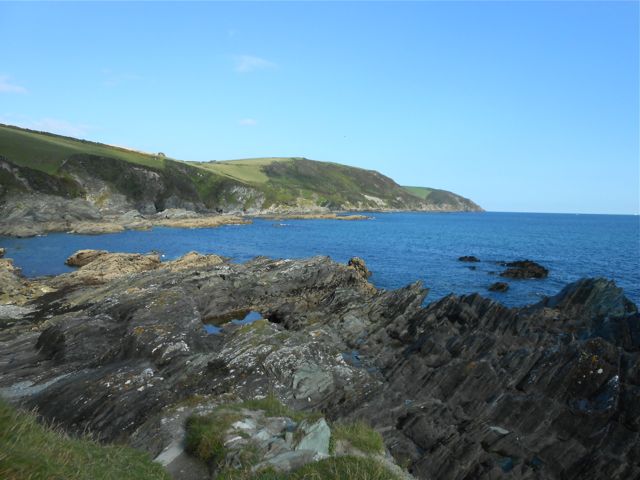 After the feast we strolled down the lane then we meandered down a leafy footpath to the beach where I swam as a child. The sea was calm and blue and the coast looked magnificent. Things became a little more strenuous after that as we clambered our way up and down the inclines of the Cornish coast path. There were occasional stops to admire the scenery or identify a plant or insect. It was glorious.

Apples in season are very much part of my cultural heritage. My mother has always had apple trees, so harvesting, eating and cooking with them at this time of year is just what you do in our family. We don’t have a specific recipe, anything goes. These tasty little cakes are my nod to Inheritance Recipes and apples this year and they would make a delightful addition to any child’s lunch box. The challenge is hosted by Margot over at Coffee and Vanilla and Solange from Pebble Soup.

They also go to Treat Petite which has no theme this month and is celebrating it’s 2nd birthday – how time flies. It’s hosted alternately by CakeyBoi and Kat over at The Baking Explorer. I’m linking these honey apple cardamom mini bundt cakes to Lisa’s Apple Season link-up over at United Cakedom. The apples for these cakes needed to be used quickly as they were windfalls. I’m thus linking to the No Waste Food Challenge which is hosted this month by Foodie Quine on behalf of Elizabeth’s Kitchen Diary.

If you make these honey apple cardamom mini bundt cakes, I’d love to hear about it in the comments below or via social media. A photo is always good too. For more delicious and nutritious recipes, follow me on Twitter, Facebook, Instagram or Pinterest.

If you like my recipe for Honey Apple Cardamom Mini Bundt Cakes, why not pin it for later?