September is the month for blackberries, apples and green cobnuts. Yes cobnuts are good at Christmas to be sure, but eat them fresh in September and it’s quite a different experience. These blackberry & apple spelt pancakes with brown buttered cobnuts are a taste sensation – truly.

I thought I was going to miss the blackberry season as I’ve been so busy. Apart from eating the odd blackberry when I’ve been out and about I’ve not picked any this year. Not until the day I made these blackberry & apple spelt pancakes with brown buttered cobnuts that is.

Whilst I was perusing Ren Behan’s excellent new cookbook, Wild Honey & Rye, I saw a recipe for apple pancakes – well! I’ve got apples falling into the garden from next door’s tree and it seems a shame to waste them. What goes best with apples? Blackberries of course. Time to finally do a bit of brambling and make some blackberry & apple pancakes.

But where do the brown buttered cobnuts come in I hear you cry? As it happens, Potash farm recently sent me some green cobnuts. I was wondering what sort of recipe to create with them and asked for ideas on Instagram. Tattysquawk said she flash fried them in olive oil with a pinch of salt. Brilliant idea. Only I decided to fry mine in butter and use them to top my blackberry and apple spelt pancakes.

They sizzled wonderfully while the butter browned and then suddenly started popping. I wasn’t expecting that. They became golden and somewhat to my surprise, wonderfully stripy. The fresh cobnuts are really good, but my brown buttered cobnuts are sensational. Raw, the cobnuts are crisp and slightly juicy and have a sweet and almost coconutty flavour. 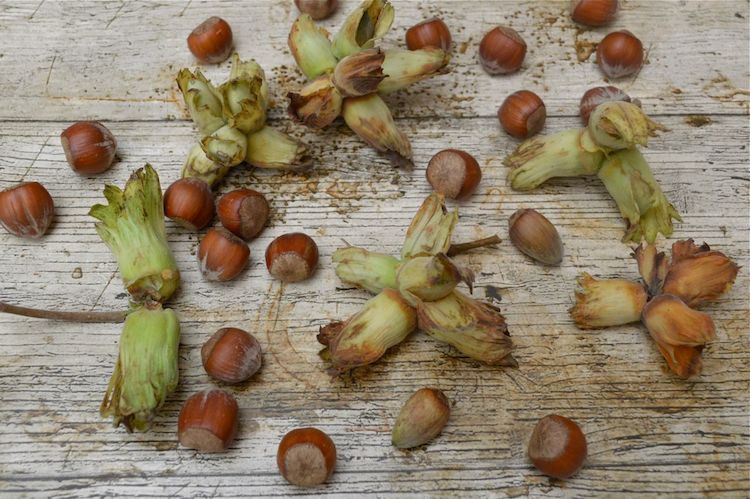 Kentish cobnuts are sold with their husks on during September and October. After that, they go darker and are sold in the form that most will recognise. If you want to try them while they’re still green, you better get your skates on, as I understand they are quite popular. Now I can see why.

I’ve written about Potash Farm in previous posts, but I’d not tried their green cobnuts before. I’m really glad I have now. The farm is situated in the rolling Kent countryside and it grows a lot of cobnuts. It has an ever widening reputation for selling high quality nuts and produce made with nuts, both online and at their farm shop. I can attest that Potash Farm fudge is exceedingly good.

Blackberry & apple wholemeal spelt pancakes are easy to make. The only difficulty I had was having to cook them one by one; I could only find a little pan to cook with. If you use a normal size pan you should be able to cook three at a time. The nuts I left to last and they cooked really quickly. I made enough batter to make two days worth of pancakes so I could enjoy them again the next day. I’m so glad I did.

The pancakes were delicious with bursts of blackberry surprising the taste buds every so often. The brown buttered cobnuts were the icing on the cake and married superbly with the apple & blackberry flavours as well as providing a contrasting crunch.

Thanks for visiting Tin and Thyme.If you make these blackberry & apple pancakes, I’d love to hear about it in the comments below. Have you any top tips? Do share photos on social media too and use the hashtag #tinandthyme, so I can spot them.

If you’d like more pancake recipes, follow the link and you’ll find I have quite a lot of them. All delicious, of course.

You can easily double the recipe to make more if needed. Please note: calories are per serving. They’re approximate and will depend on exact ingredients used.

I’m sharing these blackberry and apple spelt pancakes with Searching for Spice for Cook Once, Eat Twice.

They also go to #CookBlogShare over at Easy Peasy Foodie.

And this early autumn recipe has to go to Simple and in Season with Feeding Boys.

This post was commissioned by Potash Farm. I was not expected to write a positive review and all opinions are, as always, my own. Thanks to my readers for supporting the brands and organisations that help to keep Tin and Thyme blithe and blogging.