Soup is such a wonderful thing. This spiced parsnip spinach soup with apple and turmeric is a quick, delicious and nutritious meal. The sweetness from the parsnips, acidity from the apple and earthiness from the spinach give it a particularly tasty and rounded flavour profile. The additional flavour from the spices makes this an ideal winter warmer. It’s vegan too. 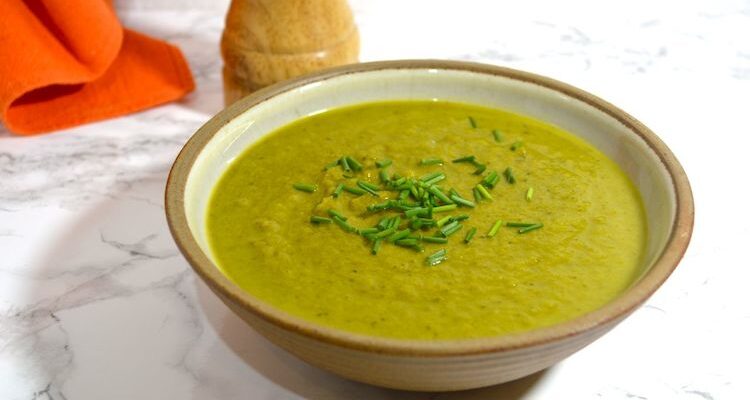 CT gets a bit sniffy about watching endless cookery programmes, although he does cave in for the Great British Bake Off. So when he’s away I take the opportunity and catch up on the odd programme. He’s been away enough over the last couple of months for me to see the entire Simply Nigella series. Her parsnip spinach soup I simply had to try.

Parsnip soup is one of my favourites. I like it spiced or with apple, but I’d never thought to use spinach and make it green until I saw Nigella do it. Of course, by the time I got around to making it, I couldn’t remember what ingredients she’d used other than parsnip and spinach. I hunted for the recipe online, but it was not to be found.

Fine, I thought, I’ll make an amalgam of my two usual recipes and throw in some spinach for good measure.

I decided I’d test out the soup function of my new ThermoCook whilst I was at it. How incredibly simple. I threw all the ingredients into the machine, selected the chop function, followed by smoothie followed by the thick soup programme and away it went. Twenty minutes later, I had a tasty hot jug of spiced parsnip spinach soup just waiting to be downed.

And it really was very tasty, just right for a chilly wet Cornish winter’s day.

You can however, make it in a saucepan and blitz it with a stick blender. I’ve given instructions for this in the recipe below.

Of course I now use the fabulous Froothie Evolve power blender*, with its two glass jugs. One of which makes soup. And such beautiful smooth velvety soup. Not the picture you can see here, I hasten to add.

Thanks for visiting Tin and Thyme. If you make this spiced parsnip spinach soup with or without the spelt flour, I’d love to hear about it in the comments below. Do share photos on social media too and use the hashtag #tinandthyme, so I can spot them.

If you’d like even more soup recipes, follow the link and you’ll find I have quite a lot of them. All delicious, of course.

I’m sending this spiced parsnip spinach soup off to No Croutons Required with Lisa’s Kitchen and Tinned Tomatoes.

The post contains affiliate links which are marked with an asterisk*. Buying through a link to a Froothie product* will not cost you any more, but I will get a small commission. This helps keep Tin and Thyme blithe and blogging. Opinions are, as always, my own.