Dom’s random recipe challenge this month is to randomly pick something from our stashes of magazines, cuttings and pull-outs. He knows us so well; don’t we all have a pile of those lurking around somewhere, trying to attract our attention and making us feel guilty? In my more organised moments, I gather clippings and old envelope jottings and put them in folders – three in fact, one for sweet stuff, one for savoury and one for Christmas. Annoyingly, I haven’t got organised enough to have one for chocolate. However, I’m not as efficient as I’d like to be, so most of them are still lying about the house in various places or used as bookmarks. I was NOT going to embark on a mega house-clearance and recipe sort out week, so I put my hand into the file for sweet recipes, hoped for the best and pulled out ……. another apple cake recipe!!!!!

I’d pretty much thought I’d done my bit for apples this month, but it was not to be. This recipe for Lord Lambourne Apple & Thyme Cake, came from an RHS Grow Your Own card that I think I picked up about four years ago when visiting RHS Rosemoor in North Devon. Anyway, I have plenty of apples from my mother’s tree, the use of thyme seemed interesting and I could easily add chocolate chips into the mix so I started peeling apples. 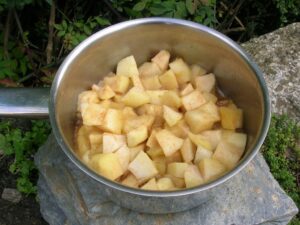 It’s very hard to tell as I have only memory for comparison purposes, but I think this might be the best apple cake I’ve made so far. It was totally delicious. Very smooth in the mouth, cinnaomony and toffee appley too. My only complaint was that the thyme was only just detectable.