These apple cider scones are made with wholemeal spelt flour and flavoured with cinnamon. They are light, flavoursome and make for a great Sunday breakfast or teatime treat. Just spread with butter. 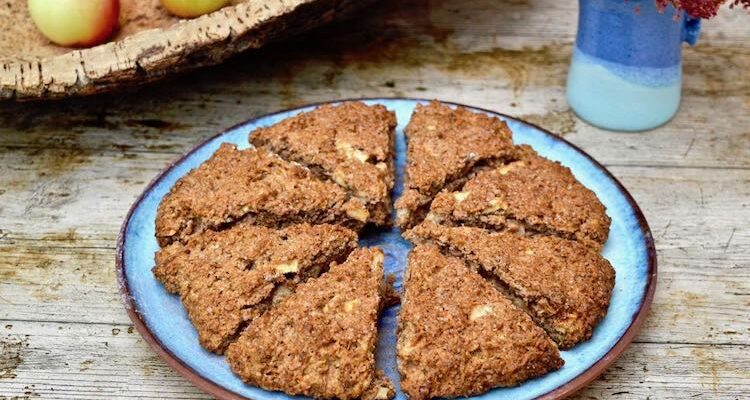 As I was looking out of the rain splattered window early Sunday morning, my eye caught a rather large pile of apples that had fallen into our garden from a neighbour’s tree. Initially, I was tempted to ignore them, but my dislike of waste got the better of me. So, out into the pouring rain I went, in my nightdress, to forage for some of the less battered ones.

Here’s what I came up with: apple cider scones made with wholemeal spelt flour and flavoured with cinnamon.

CT was still snoozing in bed, but I reckoned he’d soon wake up when the enticing scent of baking cinnamon wafted up the stairs. It worked and we had warm apple cider spelt scones for breakfast. What a treat. Rustic in appearance they may be, but they sure tasted good.

I usually make scones using the measurements I grew up with. This means I don’t need to look up a recipe or think very much about it at all. My mother used to make apple scones when I was young and I was always intrigued that she made them in one large round and then cut them into triangles. It was a trick, so she said, that she picked up when she lived in the States.

Scones are such an easy bake to make, but doing it this way makes the process even simpler. No need for rolling pins or dusting anything down with flour. Just pick up the dough, place it on a baking sheet and flatten it out into a round.

For this autumnal take on my normal apple scone recipe, which for some reason I haven’t yet blogged, I thought I’d use cider rather than kefir or sour milk. Cider enhances the flavour of the apples and reacts with the bicarbonate of soda thus helping the scones to rise. It also seems like a rather decadent but appropriate ingredient for a wet Sunday morning breakfast in September.

As I didn’t use a milky substance, I added an egg to the mix to help bind the scones together. You can, however, forgo the egg and add in some extra cider to compensate. Just bear in mind that it’ll make for a crumblier scone.

There’s less sugar in the scones than you’d expect. If you have a really sweet tooth or your apples are particularly sour, you may want to add a little more. But I often find that less is more when it comes to sugar. The apple and cinnamon flavours are allowed to shine and the scones are relatively healthy.

Of course, you don’t have to eat these apple cider scones for breakfast or brunch. They’d make a lovely afternoon tea treat too. In either case, eat them warm if you can and slather them with butter.

And just in case you feel that apple isn’t enough on its own, here’s my recipe for blackberry and apple scones.

As regular readers will know, wholemeal spelt is my go to baking flour. It works well in most things, but it’s particularly good for cakes, bread and scones. The bran stops bakes rising as much as they would do with white flour, but the end result is not at all heavy.

These apple cider scones had substance, but were light in texture and nutty in flavour as were the matcha green tea scones seen below. I also make my Welsh cakes with wholemeal spelt.

If you’re a bit unsure about using 100% wholemeal spelt, you could try a mixture of half wholemeal and half plain. For a while I did this and there’s no doubt the scones were good, but actually they’re no better than those using the real deal.

Turns out I’d rather have my scones delicious and nutritious than just delicious. Both the brie & chive lunch scones and the rich chocolate scones pictured below were made with half and half.

You can replace the spelt with ordinary wholemeal flour and they will still be good. Spelt flour is expensive, but we’re better adapted to it than we are to modern wheats, so it’s much easier on the digestion and I reckon it’s worth that little bit extra. These wild garlic cheese scones were made with a mixture of half wholemeal flour and half plain.

Thanks for visiting Tin and Thyme. If you make these apple cider scones with cinnamon, I’d love to hear about it in the comments below. And do please rate the recipe. Have you any top tips? Do share photos on social media too and use the hashtag #tinandthyme, so I can spot them.

If you’d like more apple recipes, follow the link and you’ll find I have quite a lot of them. All delicious and nutritious, of course.

Go lightly when handling scone dough, they can get tough if over mixed.Any type of apple will do for these scones, though they are a good way to use up windfalls.You can forgo the egg and add in some extra cider to compensate, but it will make for a crumblier scone.Best eaten on the day of baking or frozen for later consumption.Please note: calories and other nutritional information are per serving. They’re approximate and will depend on exact ingredients used.

I’m sending this recipe for apple cider scones off to #BakingCrumbs with Jo’s Kitchen Larder and Only Crumbs Remain. They also go to #CookBlogShare, hosted by Easy Peasy Foodie this week and #CookOnceEatTwice with Searching for Spice.