A not quite traditional Dorset apple cake. It swaps caramel chocolate for raisins, but oh what a lush result this gives. 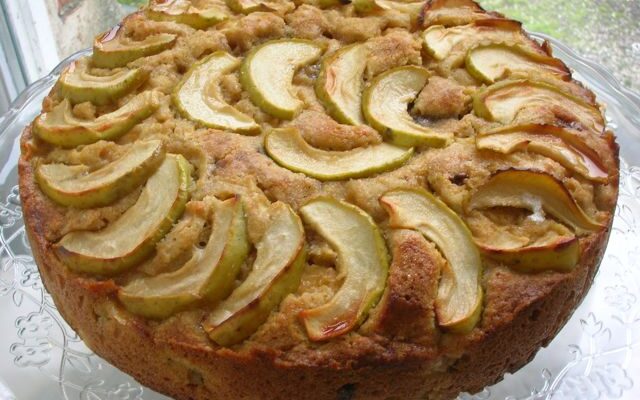 Best of British comes back to the South West this month from London and has now reached the county of Dorset. The first and if truth be told, only thing that came to mind when thinking about Dorset speciality food was Dorset Apple Cake. Strangely, with all of my cookery books I didn’t have a single recipe for this. So, I resorted to the net and came up with this winner – voted the Dorset National Dish in 2006 by Greg Coomer.

Like many other people this year, I haven’t had nearly as many apples from my mother’s trees as normal, but I still have a few. I’d been mulling over an apple cake for a while and wanted to include a bar of Lindt Luscious Caramel in it. Easy peasy, I would adapt Greg’s cake of course. I made a larger quantity as I don’t have an 8″ cake mould, omitted the lemon peel, substituted chocolate for raisins and used cardamom sugar. I also substituted buckwheat for the specified cornflour and did my usual mix of flours. I also used, err, Cornish apples – shhhhh!

Luscious by name, lucscious by nature and the only way to describe this cake. The apple shone through and was complemented perfectly by the caramel chocolate. As you can see, we felt it was also complemented by a large spoon of Cornish clotted cream. I now feel the urge to stock up on this type of chocolate so I can include it in other apple cakes.

Best of British is sponsored by The Face of New World Appliances and hosted once again by Karen of Lavender and Lovage this month.