An unusual apple cake with a layer of cinnamon flavoured apples baked in the centre of a fairly plain cake. This Irish apple cake is just perfect served warm as pudding with custard or cream. But it’s also good at room temperature for afternoon tea. 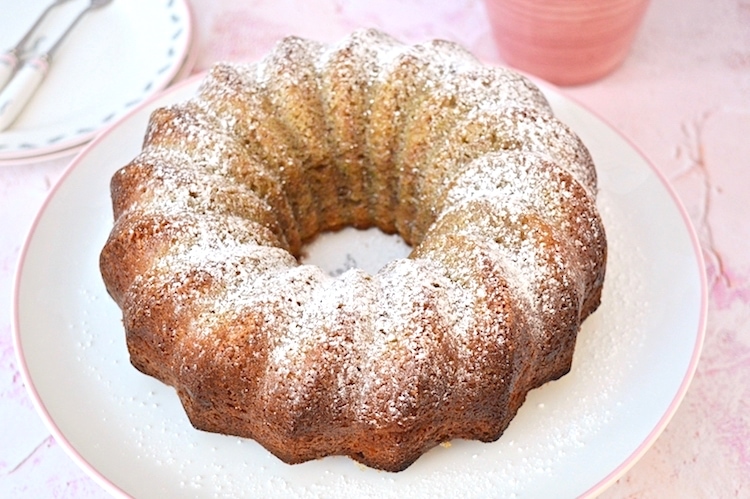 At this time of year when apples are abundant, I’m always on the look out for new ways of cooking with them. Last week I made these cheese and apple muffins.

This recipe is inspired by Rachel Allen’s Irish apple cake. Thanks to @fussfreefoodie on Twitter for suggesting it. As usual, my recipe bears little resemblance to the original, except for the core concept. Instead of scattering the apples throughout the cake batter or laying them on top of the cake, this one has a layer of cinnamon coated apples in the middle.

This Irish apple cake is a really simple autumnal bake. Simple and delicious gets my vote every time and this ticks both boxes. Apple and cinnamon are the only flavours in the cake and they form the middle layer. But the cake is both comforting and tasty. It’s especially good served warm with either custard or cream.

You make the cake mix by creaming the butter and sugar together, then adding the other ingredients one by one. In other words, in the usual way. The difference is, that initially you add only half the batter to the bundt. You then layer the apples sugar and cinnamon over this and then spoon the remaining cake mix on top.

You can get sixteen modest slices from this Irish apple cake if it’s destined for a crowd. For pudding you might want to serve larger slices. Because, quite frankly, why wouldn’t you?

If you have a bundt mould or tin, it turns a relatively plain cake into something that looks really good. Bundts are just brilliant for this. If you bake it in an ordinary cake tin, then sprinkle a tablespoonful of sugar over the top of the cake prior to baking. This will give a nice crunch to the top.

Can You Swap Ingredients?

No cake recipe is set in stone and you can always swap ingredients. It could be that you don’t have a specific ingredient or that there’s something you don’t like. And of course, you could have special dietary needs. Here are a few ingredient swap ideas.

I used cardamom sugar rather than plain golden caster sugar. But that’s just because I have a jar of it sitting permanently on the shelf. It adds subtle citrus notes that you wouldn’t be able to identify, but you’d notice if it wasn’t there. If you use ordinary sugar, however, it will still be delicious.

Needless to say I made the cake with my favourite wholemeal spelt flour. Follow the link which will give you other options if you want to use a different flour. I also used kefir as the wet ingredient. This definitely adds something good to the overall flavour, but also helps the cake to rise. If you don’t have any kefir, swap it for buttermilk or sour milk. To make sour milk, just add a spoonful of lemon juice to milk and leave it to thicken for five minutes before using.

What Sort of Apples Should You Use?

Cooking apples or Bramleys are the best apples to use in this Irish apple cake. You want them to be soft when you bite into the cake. These type of apples are also quite sour, so they generally give a good flavour. If you use crisp eating apples, they may not soften up enough whilst the cake bakes. I used windfalls from our garden, which, sadly, aren’t cooking apples. They were firmer than I’d have liked.

If you’re looking for ways to use apples other than cake, try this apples tag. Alternatively, head over to my Apple Day board on Pinterest where you’ll find tons of inspiration.

Thanks for visiting Tin and Thyme. If you make my version of Irish apple cake, I’d love to hear about it in the comments below. And do please rate the recipe. Have you any top tips? Do share photos on social media too and use the hashtag #tinandthyme, so I can spot them.

If you’d like more bundt cake recipes, follow the link and you’ll find I have quite a lot of them. All delicious, of course.

Loosely adapted from Rachel Allan’s Irish apple cakeYou can use a large loaf or round tin if you don’t have a bundt mould. If you do this sprinkle 1 tbsp of sugar over the top of the cake prior to baking.Please note: calories and other nutritional information are per serving. They’re approximate and will depend on exact serving size and ingredients used.

I’m sharing this autumnal Irish apple cake with Jo’s Kitchen Larder and Apply to Face Blog for #BakingCrumbs. It also goes to Lost in Food for #CookBlogShare.