If you love peanut butter and you love brownies too, then look no further. These peanut butter brownies are so very delicious. They’re rich and fudgy and sweet and salty and, perhaps not surprisingly, a real crowd pleaser too. 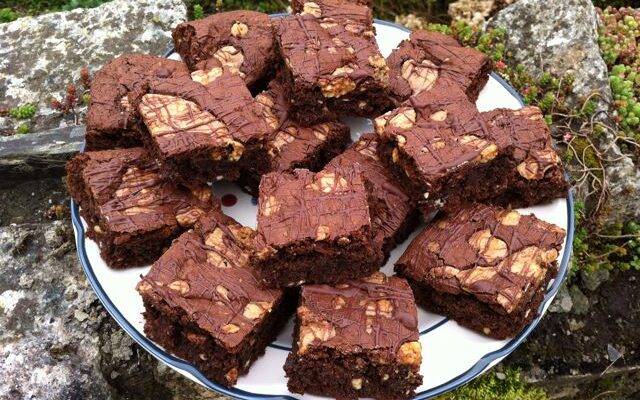 What cake event is complete without a brownie on offer? Well that’s what I thought anyway. So when it was time for my cake bake for the Book Swap event (some months ago now), it was just a question of what type of brownie to go for.

I’ve noticed a lot of peanut butter and chocolate combinations on the blogosphere recently. And I’ve not used this particular pairing since I made peanut butter blondies over a couple of years ago and before that peanut butter cupcakes. Both had worked well, so peanut butter brownies it was going to be.

As with most brownies, the recipe is incredibly easy. It’s my one pan method and it works a treat. No fuss and little washing up to do. Although, if you want to drizzle some chocolate over the top as I’ve done here, you will need a separate bowl for that.

The only tricky part is baking them for the right amount of time. Overdone brownies aren’t fun at all, but you don’t want them raw either. So the magic happens when you get them just right – almost but not quite cooked so they keep that glorious fudginess that we all love. When you take them out of the oven, there should be a slight wobble to the top. Because they will firm up as they cool down.

These peanut chocolatey delights were exceedingly good and proved very popular at the event. Luckily, I managed to save one for CT and snaffle one for myself.

For the complete experience, with nearly fifty brownie recipes on Tin and Thyme, head over to my brownies and blondies category.

Thanks for visiting Tin and Thyme. If you make these peanut butter brownies, I’d love to hear about it in the comments below. Do share photos on social media too and use the hashtag #tinandthyme, so I can spot them.

Please note: calories and other nutritional information are per pancake. They're approximate and will depend on exact ingredients used. Sticky blood orange not included.

This month’s random letter for Alpha Bakes happens to be P for Peanut Butter Brownies of course. Alpha Bakes is hosted this month by Caroline Makes and is co-hosted on alternate months by Ros of The More Than Occasional Baker.