Dense chocolatey squares of deliciousness that taste of both chocolate and chestnuts. These chestnut brownies have crisp tops followed by deep dark smoothness below. A quick and easy one pan method that leaves little in the way of washing up. 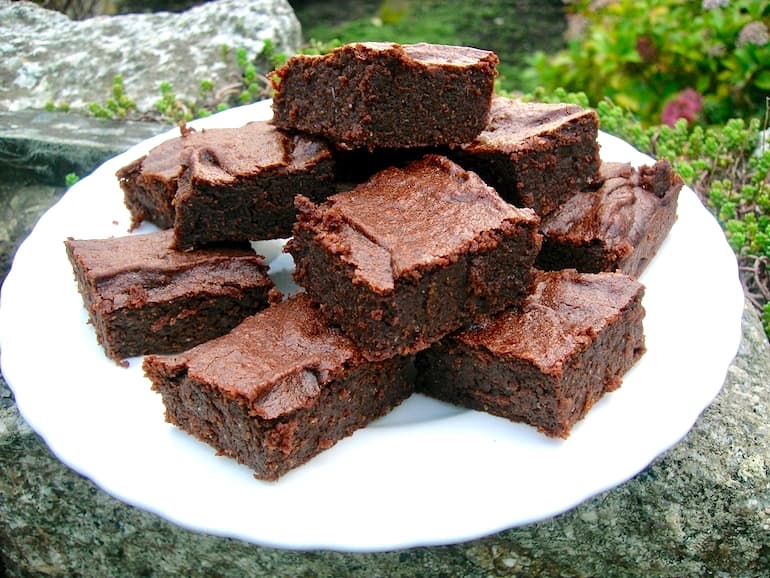 Who else has seen the recent spate of Dan Lepard’s chestnut brownies appearing on food blogs? Well, there’s been a few and I don’t want to get left behind! As we were due to visit friends for dinner the other day, I thought I’d make some. I reckoned they’d make a rather nice after dinner treat.

Recently, I received another bag of Chocolate by Trish that I wanted to try out. The chocolate buttons are 74% cocoa solids this time. These chestnut brownies seemed like a perfect opportunity to try them out.  For those that didn’t catch the last batch I had from her, take a look at this ganache recipe.

The dark Chocolate by Trish didn’t disappoint. I couldn’t help but try a few of the buttons. They have a fragrant fruity aroma which is the first note to hit the tongue followed by varied spicy notes. I had to restrain myself from eating more as they were so good. Like the milk chocolate buttons these melt beautifully and being such a dark chocolate give a really rich quality to the brownies.

Luckily, I didn’t use all the buttons and there are enough left over to make some chocolates for Christmas.

When I went to the cupboard to get out my jar of organic chestnuts that had been lurking there for quite some time, I was surprised to find it was a jar of chestnut puree. Oh well! Never mind, I was planning on adapting Dan’s recipe anyway.

Actually, I was quite pleased by this. My chestnut brownies may not have had the contrasting textures of the original, but dare I say it? I suspect that my version might be nicer.

As I was somewhat stretched for time, I used my all in one pan method, rather than whisking the egg whites separately as in Dan’s recipe. This not only reduces the time needed to make the chestnut brownies, but it also cuts down on washing up.

Every time I produce a new brownie recipe, I reckon it’s the best one I’ve ever done. And this was no exception. The smell of the mixture baking is quite heady and each dense chocolatey square has the wonderful aroma of both chocolate and chestnuts.

These chestnut brownies are particularly rich and they’re not too sweet either. Must be all that lovely 74% chocolate. A crisp top followed by a deep dark smoothness which melts on the tongue and lingers in the mouth. They’re not exactly squidgy, but they’re not in the least cake like either.

I think I got lucky with the chestnut purée. It’s thick, almost creamy and tastes of marrons glacés. In fact it’s so delicious, I only just managed to resist eating it all with a spoon before ever it reached the chestnut brownies. The marron glacé flavour is very much there in the finished brownie and plays its own role alongside the good strong taste of chocolate.

Most of the brownies disappeared during a prolonged post dinner fireside chat. Luckily, I’d thoughtfully kept a couple back for home consumption. We enjoyed these cold from the kitchen the next day and they were still delicious. They were differently delicious with a new fudgy consistency which was very moreish. Unfortunately that was our lot.

For more brownie recipes, why not take a look at my Brownies & Blondies category? I have a lot to choose from and you’re bound to find something there you’ll like.

Thanks for visiting Tin and Thyme. If you make these chestnut brownies, I’d love to hear about it in the comments below. And do please rate the recipe. Have you any top tips? Please share photos on social media too and tag me @choclette8, so I can spot them.

I was given these products for review purposes. However, I was not required to write a positive review and all opinions are, as always, my own. Thank you for your support of the brands and organisations that help to keep Tin and Thyme blithe and blogging.