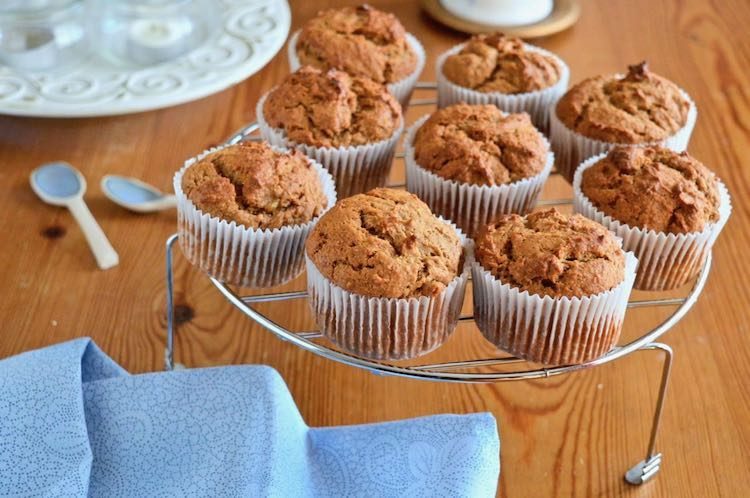 These vegan peanut butter banana muffins are so quick and easy to make that they’re the perfect bake for when you’re in a hurry or unexpected guests arrive. All but the bananas are store cupboard ingredients. Not only are these muffins super delicious, but they’re made with wholemeal spelt flour and are vegan too. As a bonus, you’ll also find a gluten-free almond butter version later in the post.

END_OF_DOCUMENT_TOKEN_TO_BE_REPLACED 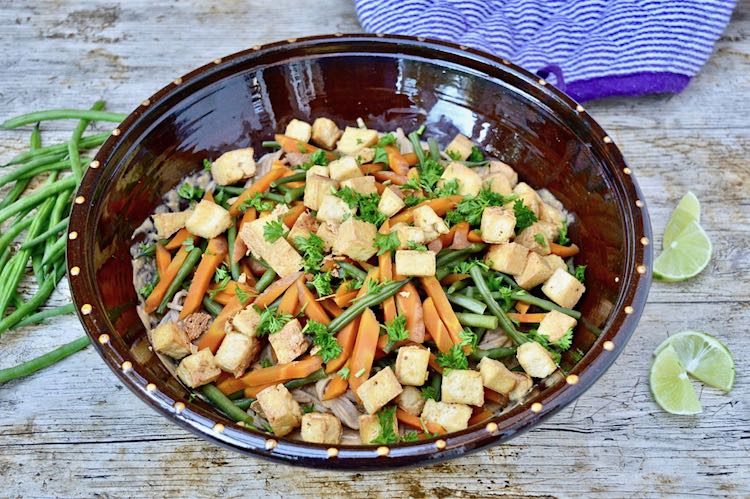 This recipe for spicy peanut butter noodles with steamed vegetables and smoked tofu is quite a feast and one the whole family will enjoy. Just be careful about the amount of chilli added for those who are sensitive to it. It’s a very quick meal to put together, although a bit of juggling is needed to get everything ready at the same time.

END_OF_DOCUMENT_TOKEN_TO_BE_REPLACED

Well, today is Valentines’s Day and to really show the love, you’ve got to have something chocolatey and decidedly decadent. More importantly today marks Tin and Thyme’s 9th anniversary. As some of you will know, it started life as Chocolate Log Blog and was a means for me to explore one of my great loves – the world of chocolate. This chocolate peanut butter ice cream sundae seems like a fitting celebration.

END_OF_DOCUMENT_TOKEN_TO_BE_REPLACED

Peanut Butter Chocolate Chip Cookies with a Kick of Chilli 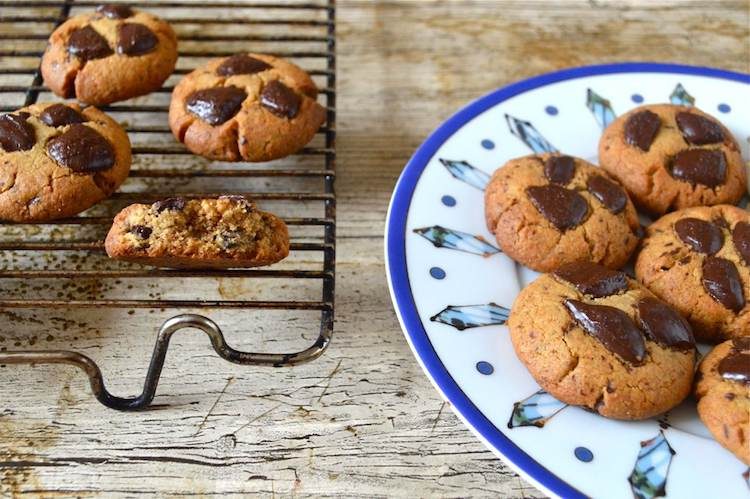 END_OF_DOCUMENT_TOKEN_TO_BE_REPLACED

Oat biscuits made with wholemeal spelt flour and oats. Light on sugar but strong on flavour, these crunchy peanut butter cookies with zesty orange are both healthy and delicious. They make a good accompaniment to a morning or afternoon cuppa.

END_OF_DOCUMENT_TOKEN_TO_BE_REPLACED

This recipe for chocolate peanut butter cups is just so good. Honeyed salty peanut butter enrobed with dark milk chocolate and encrusted with cocoa nibs. They make a fabulous gift or the ultimate self-indulgent treat.

END_OF_DOCUMENT_TOKEN_TO_BE_REPLACED 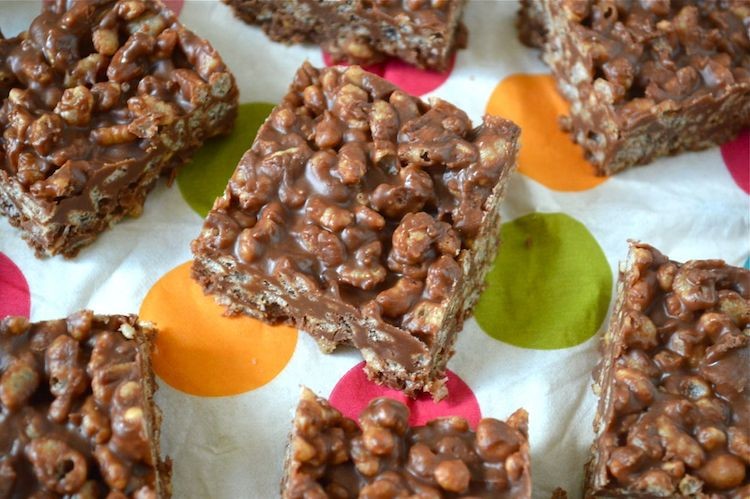 END_OF_DOCUMENT_TOKEN_TO_BE_REPLACED

With two bananas sitting quietly neglected in the fruit bowl and just about to expire, there was nothing for it but to make a banana cake. It just so happens that One Ingredient this month is bananas and I was keen to join in the fun. One of the cakes I remember being particularly pleased with last year was my caramelised banana, coconut and chocolate peanut butter cake. The combination of banana, peanut butter and chocolate worked particularly well and I wanted to try the it again, but in a different guise this time. I was also keen to try out a new cake mould sent to me for review (watch out for a forthcoming review and giveaway). It is shaped to look like a bar of chocolate and I obviously couldn’t resist. This also seemed like a good opportunity to try out the Atkins & Potts dippers which I thought would look good poured down the sides of the cake like lava. I based my recipe on one for Chocolate and Banana Cupcakes from Cupcakes from the Primrose Bakery. I changed the quantities and added peanut butter to the mix.

Although very sweet, the cake was nonetheless delicious. It had a fudgy texture with crunchy bits from the peanut butter. Much to my relief, the cake turned out of the mould without getting stuck, although the definition of the embossed writing (“yum”) was not as clearly defined as I’d hoped. The buttery toffee dipper was just as delicious as it sounds and I had a hard job not to eat it straight from the jar. The dark chocolate dipper was also good and would be perfect for drizzling over ice-cream. They had both set rather solid, having spent some time in my very cold kitchen. However, when I warmed them up on the heater, they were more or less the right consistency for drizzling. 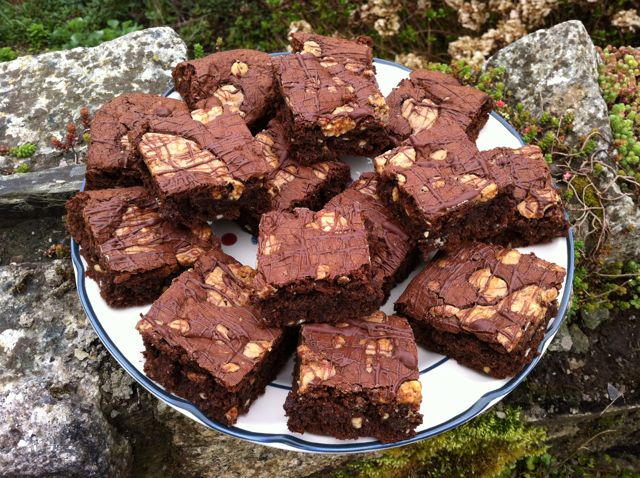 If you love peanut butter and you love brownies too, then look no further. These peanut butter brownies are so very delicious. They’re rich and fudgy and sweet and salty and, perhaps not surprisingly, a real crowd pleaser too.

END_OF_DOCUMENT_TOKEN_TO_BE_REPLACED 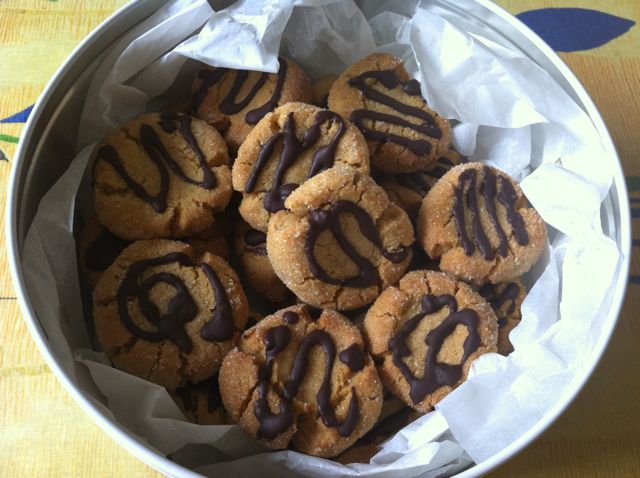 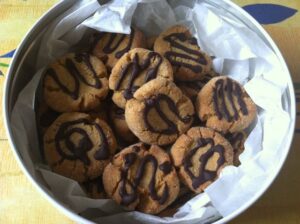 The saltiness and creaminess of peanut butter works really well combined with the sweetness of baked goods and is a flavour combination I have recently rediscovered. It works exceptionally well with chocolate, but then I would say that wouldn’t I. When I was reviewing The Cookie Dough Lover’s Cookbook earlier this month, I noted a recipe for peanut butter and chocolate thumbprint cookies which looked appealing. With my birthday tea fast approaching, I thought these would provide something a little different and would fill in the gaps between the slabs of cake.

When it actually came to making the cookies, I decided not to include the chocolate cookie dough thumbprint filling. To me it seemed as though they would be sweet enough without and more to the point, I was running out of time. Measuring cups of butter and peanut butter is not really on, so I did the best I could in terms of approximations. 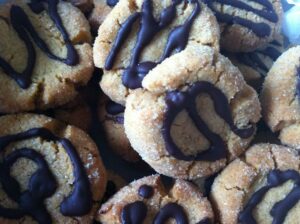 These made about 32 very substantial cookies. Despite my ineptitude with the melted chocolate and paper cones, more of which covered the kitchen than the cookies, I was rather pleased with the results. They were sweet, salty and delicious and not surprisingly, proved to be very popular.

These would make excellent bake fare for a summer fete or cake stall, so I am submitting them to Tea Time Treats hosted this month by Karen of Lavender and Lovage. This monthly event is run alternately by Karen and Kate of What Kate Baked.