This one pan brownie recipe is super quick and easy. It produces a tray of rich, flavoursome raspberry fudge brownies in no time. The brownie batter is made with dark raspberry chocolate, then studded with lush fresh raspberries and pieces of white chocolate. What’s not to love? 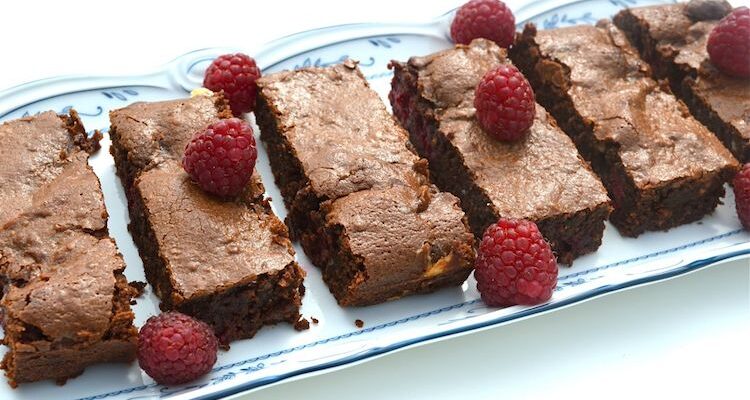 With my Divine chocolate stash for #NationalChocolateWeek, I couldn’t go without making something with at least one of the bars. An excuse, if any were needed, to indulge. We Should Cocoa is all about the USA this month. So as Cornish autumn raspberries are still available and as I have a bar of Divine raspberry 70% dark chocolate to hand, it’s a no brainer. Raspberry fudge brownies it is.

Brownies are an American classic that I was first introduced to over twenty years ago by an American baking friend. I’d never heard of them before and was delighted by their sweet chocolatey fudginess. I’m not sure I’ve ever managed to make any quite as good as Gina’s fudge brownies, but I never give up trying. They are my go to bake when I’m in a hurry.

Getting the texture of a brownie just right is not always easy. Leave it too long and it can become cakey rather than fudgy, but take it out too soon and you can end up with goo. If this happens, place it in the fridge for a few hours and it should firm up. In my experience, it’s always better to undercook than overcook.

These raspberry fudge brownies are quick to make and slightly healthier than your average brownie. That’s what I like to tell myself anyway. They are made with wholemeal flour and less butter than most brownie recipes. And they contain fruit.

I use my one pan method for this recipe, which means it’s fuss-free and there’s less washing up. Win win.

It goes without saying, they’re also quite delicious, being both fudgy and fruity with bursts of caramelised white chocolate. The weekend starts here. Now where’s that clotted cream?

And if you’re after more ideas for brownies I have heaps of brownie recipes on the blog.

Thanks for visiting Tin and Thyme. If you make these raspberry fudge brownies, I’d love to hear about it in the comments below. And do please rate the recipe. Have you any top tips? Do share photos on social media too and use the hashtag #tinandthyme, so I can spot them.

If you’d like more raspberry recipes, follow the link and you’ll find I have quite a lot of them. All delicious and nutritious, of course.

Getting the texture of a brownie just right is not always easy. Leave it too long and it can become cakey rather than fudgy, but take it out too soon and you can end up with goo. If this happens, place it in the fridge for a few hours and it should firm up. In my experience, it’s always better to undercook than overcook.Please note: calories and other nutritional information are for the whole jar of mayonnaise, not per serving. They’re approximate and will depend on exact ingredients used.

Tracy over at It’s Not Easy Being Greedy has chosen the theme, USA, for this month’s chocolate extravaganza, aka We Should Cocoa. Brownies are one of America’s best known bakes over here in the UK. Needless to say, I’ve done my fair share of spreading that brownie love.

As I bought the Cornish raspberries at my local greengrocer’s, the properly free range duck eggs at our Friday Country Market and the flour from our local mill at Cotehele, I’m sending these raspberry fudge brownies off to Elizabeth’s Kitchen Diary for Shop Local.

Brownies are just perfect when you’re In a Hurry, which is the theme for this month’s Love Cake with Ness at JibberJabberUK.

Apart from sugar, eggs are pretty much the main ingredient in brownies, so these also go to Dashing Dom over at Belleau Kitchen for Simply Eggcellent.

I’m cheekily sending these raspberry fudge brownies off to the ever forgiving pair at Alpha Bakes, Caroline Makes and The More Than Occasional Baker. The letter is W for the Wholemeal Flour which is an integral part of this brownie recipe.

And lastly these brownies are winging their way to Bake of the Week with Helen at Casa Costello.

I’m also sharing this with Charlotte’s Lively Kitchen and the #FoodYearLinkup for #NationalChocolateWeek.