There seems to be a sudden spate of black beans being used in chocolate cakes. I first came across the phenomenon with a cake I spotted on What I Cooked This Weekend and then these brownies from Hungry Hinny and then I just saw them everywhere. The idea is that the black beans, as well as giving a bit of extra fibre, can reduce the amount of fat in the cake without making it taste less delicious. I was sceptical, but wanted to try it for myself. It’s taken me a while because getting hold of black beans was the hardest part. I adapted my recipe from one I found on Joy the Baker, who in turn got it from Martha Stewart – and so it goes on! 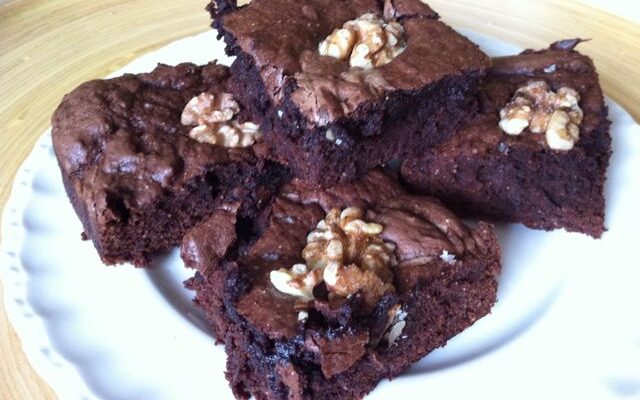 I couldn’t wait for these to go cold before trying them, so I had my first one warm from the oven. All scepticism instantly disappeared as I bit into this most delicious, dark and moist brownie.  The crunch of toasted walnuts and spike of salt, made for a great contrast in texture as well as flavour. The salt was a bit of a surprise, especially for CT who was “ambushed by my own expectations” but once he got used to it, thought it was good. As for the beans, it was nigh on impossible to detect them. Despite the small amount of butter, these brownies kept really well, in fact they got fudgier with age and we managed, with commendable restraint, to make them last the week – nearly!

What could say love and romance more than brownies? I could think of a few things, but brownies certainly say it for me. With this in mind, I am entering these into Tea Time Treats – fun filled monthly tea parties hosted by Karen of Lavender and Lovage and Kate of What Kate Baked. This month Kate has chosen Romance as the theme.