This is more of a Scilly post than a flapjack one. But scroll down to the bottom of the post and you’ll find the recipe for some very scrumptious fig, almond and honey flapjacks with optional chocolate chips. Meanwhile, if you’ve never thought of heading off to the Isles of Scilly, this post might just make you change your mind.

Flapjacks are one of those recipes that’s almost essential to have in your baking repertoire. They are brilliant for filling a gap or a lunchbox, aren’t as unhealthy as many snacks and are eminently portable. These honey flapjacks are really versatile and recently, they kept us going on the boat over to the Isles of Scilly.

The Isles of Scilly

This year, for our annual holiday, we took a celebratory trip to the Isles of Scilly. It was utterly and completely glorious. We were hoping for some good walking, a bit of pampering and relaxation and lots of delicious food in a quiet and beautiful location. And this exactly what we got. The weather wasn’t too bad either. We only had three days of drizzle and mists and the rest of our week was near unbroken sunshine – not bad for this part of the world. 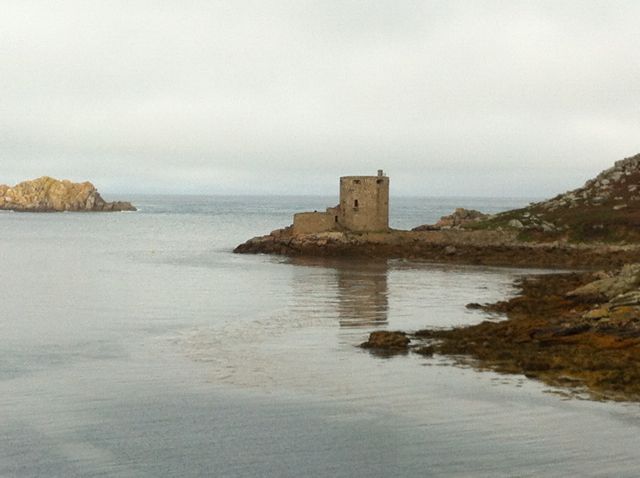 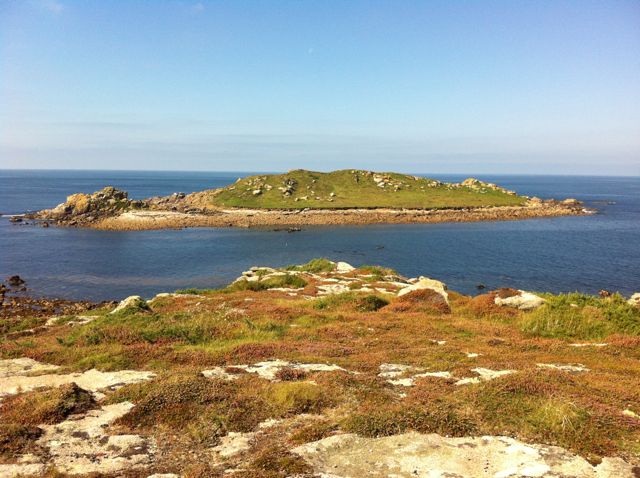 Update: A few years later I spent a little time on St Mary, the largest of the Islands. Here’s the post that tells you all about it: The Scintillating Isles of Scilly.

We’ve been promising ourselves a trip to the Scilly Isles for years. I went to Bryher on a school camping trip when I was twelve and fell in love with the island then. I’d never been back and CT had never been at all, despite all the botanical delights to be seen there. If it hadn’t been for Issy of Clotted Cream Diaries, I very much doubt we’d have made it this year either. Issy is Scillonian born and this year left her life here on the mainland to go home and set up an eco B&B. And guess what? It just happened to be on the island of Bryher. What with significant birthdays to celebrate and total exhaustion to alleviate, the call was just too strong. 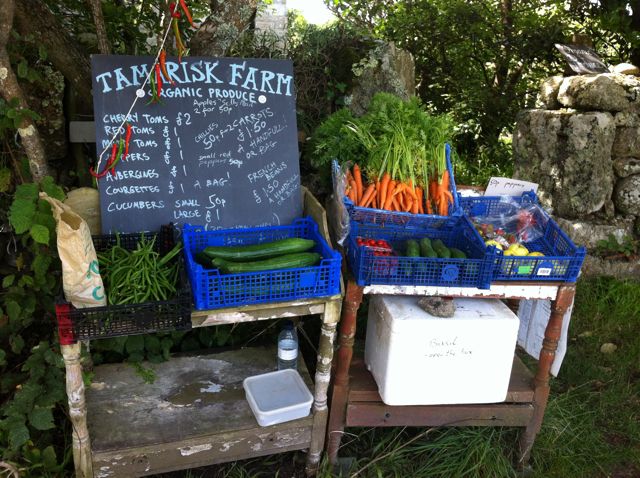 Organic produce for sale on St Agnes, Isles of Scilly. One of many roadside stalls with honesty box. 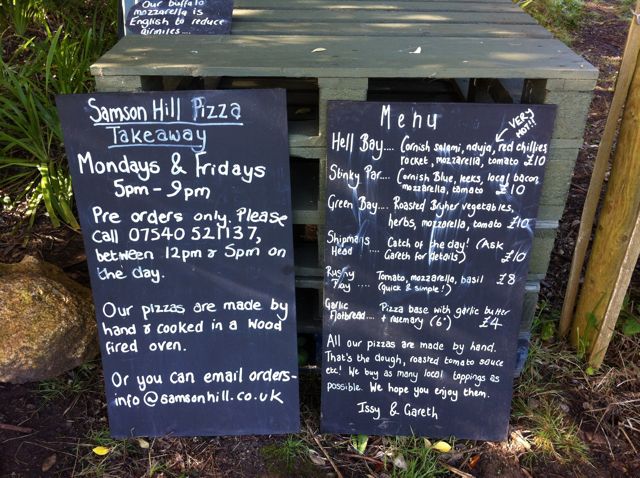 Get your pizzas here. Bryher, Isles of Scilly

The Scilly Isles are made up of many islands, but only five of them are inhabited. Bryher is the smallest, but also the least developed with a particularly wild moorland quality, which made me feel right at home. We managed to visit all five islands whilst we were there and although Bryher remains my favourite, we were both taken with St Martin’s and St Agnes as well. One of the great delights was the virtual absence of motorised road traffic. What bliss! We found the Scilly Isles in general to be very laid back and the people friendly. It was like stepping back in time and reminded us of our six months spent in New Zealand back in the 90s.

Samson Hill Cottage is the last dwelling on the sheltered side of the island, so it was wonderfully quiet and secluded. It overlooks Tresco, so we had a stunning view of the oftentimes turquoise waters.

On the day of our arrival, we were welcomed with a huge cream tea, which we scoffed in the garden. This included local clotted cream and jam along with a pile of scones made by Issy. As well as a fabulous breakfast with more menu choices than I’ve ever seen and using as much local produce as possible, we also enjoyed three evening meals.

Each afternoon when we returned from our various outings, we’d find a piece of delicious homemade cake in our room. Goodness me, Issy’s double chocolate brownies were something else. In fact they were so good, I forgot to take a picture. In addition to the B&B, Issy and her husband Gareth also do two pizza nights a week from their wood fired pizza oven in the garden.

Despite our feeling of repleteness, we couldn’t resist a pizza on our last evening and we’re so glad we indulged. Oh, did I mention the fudge? On a couple of occasions, we had a packet of locally made fudge (which just happened to be made by Issy’s mum) left in our room. I think I can safely say, we were well catered for.

As well as the chocolate brownies and pain au chocolat, we did have a couple of other chocolate indulgences whilst visiting the other islands. Sadly the chocolates, handmade on St Agnes, were not available on our visit. But luckily the island had chocolate ice-cream, made with Jersey and Ayrshire clotted cream. It was the best ice-cream I’ve had in a very long time – thick, creamy and rich. It worked really well with the, ahem, “bonus” scoop of rose geranium – a complete revelation.

So with all that food, lunch and sometimes dinner was hardly a priority for us. Quite honestly, the fig, almond and honey flapjacks I made before I left were not really needed. They did, however, come in useful on the long boat trips to and from Scilly and allayed any possible hunger pangs that arose during the day whilst we were out walking. I think we’ve come back two stone heavier than when we left.

This honey flapjack recipe is a riff on a regular one I make with nuts and honey. Little chunks of chocolate are a nice addition, but they’re entirely optional. I find the chocolate adds a welcome bitter backnote amongst all the sweetness, but I’ll often make them without.

Sometimes, I’ll use golden syrup in my flapjack recipes, because I always have a tin of syrup in the cupboard. But I do like honey flapjacks and I reckon honey is a little healthier than syrup too. So, more often than not, I’ll use honey instead. The result is very satisfying.

The beauty of this flapjack recipe is that it’s so quick to make. You can have the thought, “I need honey flapjacks” and have them on your table within thirty minutes – though they might be a bit hot. 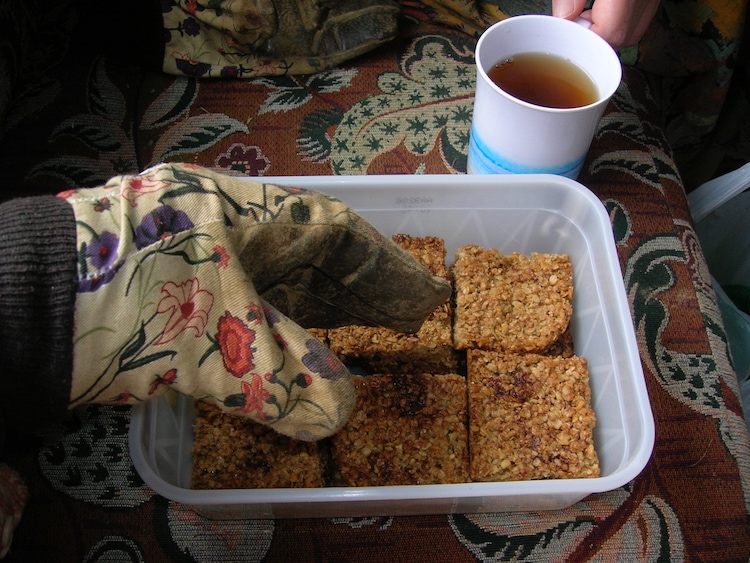 A couple of years ago, I was so inspired by my nutty honey flapjacks that I made them two days in succession. The first day I needed some energy bars to feed the workers who were helping us put a roof on our shed down at the field. The second day, we’d planned a picnic. The weather looked decidedly drizzly and we thought we might have to picnic in the car. Luckily, it all turned out right in the end and we enjoyed our honey flapjacks whilst watching the sun set over the sea.

I also make a chocolate version of these honey flapjacks from time to time. They’re different to my highly popular chocolate coconut flapjacks, in that I use golden syrup rather than honey and add desiccated coconut. But they are still very good. To the recipe blow, gently melt 100g dark chocolate along with the butter and honey. Omit the almonds and chocolate chips and swap the figs for raisins.

We enjoyed the ones pictured above as we sat in Trenant Woods overlooking the West Looe River. Surprisingly, although not fully out, there were more bluebells open on the 16th April than there were when we visited the previous year on 1st May.

Thanks for visiting Tin and Thyme. If you make these fig and almond honey flapjacks, I’d love to hear how you got on in the comments below or via social media. Do share photos on social media too and use the hashtag #tinandthyme, so I can spot them.