Home » Baking Recipes » Cake » Brownies & Blondies » Fudgy Coconut Brownies: Made With Cocoa Powder
Share on TwitterShare on FacebookShare on PinterestShare on WhatsAppShare on RedditShare on E-mail
Jump to Recipe

A cross between a bounty bar and a fudge brownie. Made with cocoa powder rather than chocolate, this recipe for fudgy coconut brownies is a keeper. They’re not overly sweet and are both chewy and fudgy at the same time. Once you’ve tried them, there’s no going back. 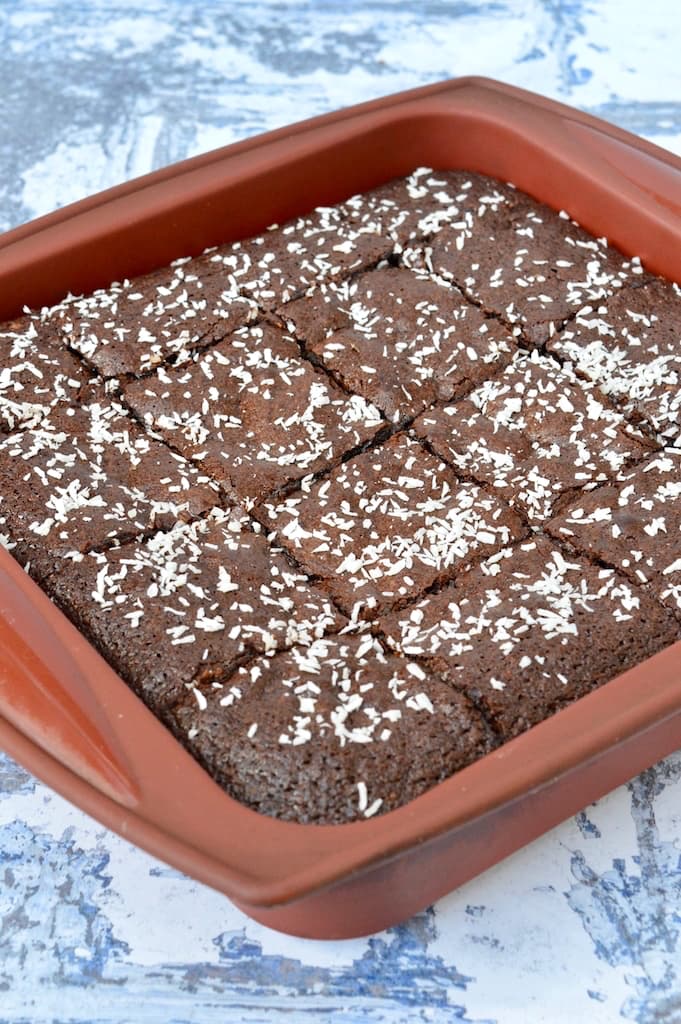 The first time I made these fudgy coconut brownies, I was in need of cheering up. I’d just heard the election results and was feeling decidedly depressed. Something really sweet was required and having just seen Lucie’s coconut brownie post, I was sorely tempted. Not having much restraint in the food line, I very quickly gave in to the temptation and baked up a batch myself. I now make them on a regular basis.

Obviously I changed things up a bit and used wholemeal flour. That first time I used eighty grams of wholemeal spelt and twenty grams of quinoa flour. I’m always trying to make my bakes a bit healthier in a vain attempt to kid myself they’re actually good for me.

The quinoa flour is absolutely fine and you wouldn’t know it’s there. But these days I tend to go for the simpler option of using just wholemeal spelt flour.

That first batch of fudgy coconut brownies may not have done much for my waistline, but they certainly cheered me up.

I was actually somewhat ambivalent about using desiccated coconut, but it actually works really well. These fudgy coconut brownies are not quite as dense as a normal brownie, but nevertheless delicious, dark, rich, and chewy. Oh! And did I say they have a lovely crunchy top?

Unusually these brownies are made with cocoa powder instead of chocolate. The result is a surprisingly chocolatey brownie which isn’t nearly as sweet as you’d expect.

How To Bake Coconut Brownies

I use my usual one pan brownie method to make these fudgy coconut brownies. It’s super simple in that everything is mixed in one saucepan . This has the added bonus of creating less washing up.

First off you just melt the butter, sugar and cocoa powder in a large pan. Then beat in the eggs, one by one.

Then it’s just a case of stirring in the remaining ingredients. I told you it was easy.

Having said that, it’s best to sift the flour and baking powder into the mix incase there are any lumps.

The only thing that’s slightly trick about brownies is figuring out when they’re cooked. If you don’t bake it long enough, you get a gooey mess. But if you bake it too long, you get a dry brownie that isn’t at all fudgy. So, the top needs to have formed a crust and be firm to the touch. However, when you shake the tin, you should still see a slight wobble.

Thanks for visiting Tin and Thyme. If you make these fudgy coconut brownies, I’d love to hear about it in the comments below. And do please rate the recipe. Have you any top tips? Do share photos on social media too and use the hashtag #tinandthyme, so I can spot them.

If you’d like more brownie recipes, follow the link and you’ll find I have quite a lot of them. All delicious and nutritious, of course.

A cross between a bounty bar and a fudge brownie. Made with cocoa powder rather than chocolate, this recipe is a keeper. They're not overly sweet and are both chewy and fudgy at the same time. Once you've tried them, there's no going back.
Prep Time10 mins
Cook Time30 mins
Total Time40 mins
Course: Afternoon Tea, Dessert
Cuisine: American
Keyword: brownies, cocoa, coconut, easy, quick, simple
Servings: 16 pieces
Calories: 300kcal
Author: Choclette @ Tin and Thyme