A white chocolate and brown sugar traybake made extra special with copious amounts of nut butter. If you’ve not tried these super easy-to-make, crowd-pleasing peanut butter blondies before, you’re in for a treat. 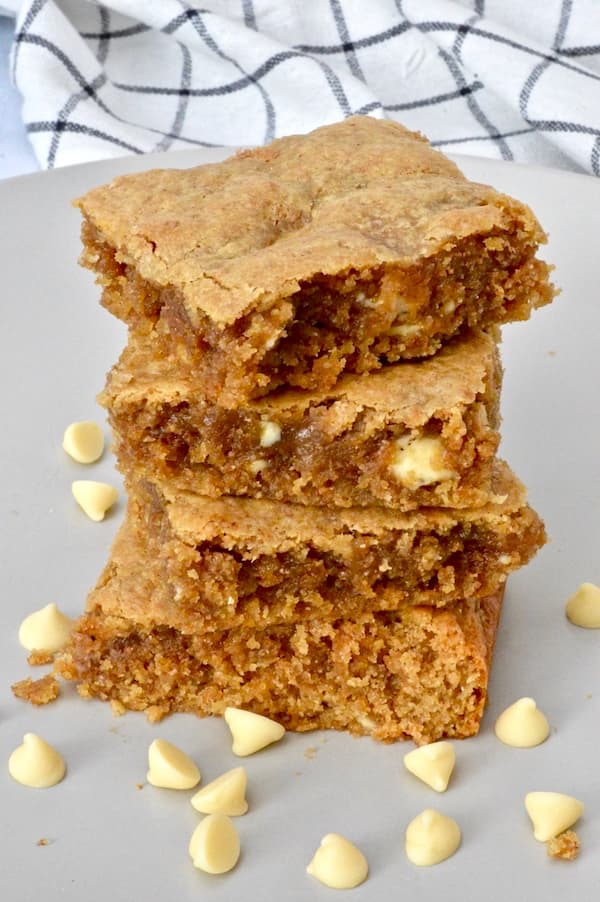 The first time I heard about combining peanut butter and sugar in a bake, I was keen to give it a go, though somewhat sceptical. It’s been a thing now for such a long time, it’s hard to remember that initial scepticism. Suffice it to say that when I made these peanut butter blondies for the first time, I’ve never looked back. They really are the absolute best.

What’s the difference between blondies and brownies? I’m often asked this question. For me, it’s simple. Brownies are made with dark or milk chocolate and blondies are very similar but they’re made with white chocolate.

The original American blondies were made as a cookie type traybake but they don’t contain chocolate of any kind. I think they’ve morphed since then and most do now contain white chocolate. You can find out more in this blondie recipe post.

When you have a sugar craving, there’s nothing quite like whipping up a quick batch of blondies to satisfy it.

I know it’s a bit of a tall claim to call these peanut butter blondies the absolute best, but they really are good. And in so many ways. They’re made with wholemeal flour for a start.

Secondly, they’re super quick to make and bake. I use my one pan method because it’s both easy and produces less washing up. It’s really just a case of melt, mix and pop into the oven.

For my traybakes, I use a 23 centimetre (eight inch) square silicone mould. I really like it because I don’t need to line it. If you use a tin, however, line it first with baking paper or you may find the finished blondies difficult to remove.

They take between fifteen and twenty minutes to bake. You’re looking for a golden top that’s just about firm to the touch, but the bake should still have a slight wobble to it. I leave mine in for seventeen minutes exactly. But every oven is different, so check after fifteen minutes and put it back in the oven if it’s not quite ready.

Once you take them out of the oven, leave them to cool completely. Then cut into sixteen squares. I’m often too impatient, as I was with the ones you can see in these photos. They were still warm when I cut them, so the edges are a little on the raggedy side. Leave them to cool properly and you’ll get a much neater finish.

However, neatness isn’t everything and these peanut butter blondies make an excellent after-dinner dessert. Just serve them warm with ice cream. Nevertheless, they’re at their squidgy best when left to cool properly. Now, didn’t I say they were the absolute best?

Once upon a time, not so very long ago in fact, Green & Black’s used to produce 100g chocolate bars. Infuriatingly, they reduced the bars to 90g. Most of my recipes are for 25g, 50g, 75g or 100g of chocolate. So this parsimonious decision of theirs is a real pain in the proverbial. What this means in practice is that I used to make this recipe with 100g of white chocolate, but now it only gets 90g.

The upshot of this is, that if you want to use more chocolate, please do. It won’t have a detrimental effect on the recipe, it will probably improve it. Just use half to melt into the batter and leave the other half to add as chips at the end. You could, of course, just use white chocolate chips or buttons instead of a bar. This means no chopping required.

Blondies are so easy to make, I don’t have a lot in the way of top tips for you. I’ve given my one pan method in the recipe already. That’s always my top tip for making both brownies and blondies. This method is fast, easy and cuts down on the washing and clearing up.

Thanks for visiting Tin and Thyme. If you make these super easy peanut butter brownies, I’d love to hear about it in the comments below. And do please rate the recipe. Have you any top tips? Please share photos on social media too and use the hashtag #tinandthyme, so I can spot them.

If you’d like more traybake recipes, follow the link and you’ll find I have quite a lot of them. All delicious, of course.

I make these blondies using ounces, so if you have scales with ounces, use those rather than grams.Delicious served warm with ice cream, but delightfully squidgy when left to cool properly.Please note: calories and other nutritional information are per serving. They’re approximate and will depend on serving size and exact ingredients used.

I’m sharing this recipe for peanut butter blondies with Lavender and Lovage for #CookBlogShare.