Did you know it is World Baking Day on Sunday 20th May? Sponsored by Stork, the idea is to have some fun baking a cake and then sharing it with others – whether that’s in actuality or sharing a picture. Ideally, photograph your cake “somewhere interesting” in an unusual place or setting, then share the photographs via Twitter using the hashtag #caking or go direct to the World Baking Day website. Stuck for ideas? You will find plenty on my blog or again you could take a look at the World Baking Day site.

I was lucky to be given some encouragement by the organisers in the form of an an amazing box of goodies to use in the making of my cake. This not only included flour, baking powder, sugar, cocoa, Stork margarine and various cake decorations, but also a splendid silicone spatula which has a built in rest to keep the blade off the work surface and a very handy recipe journal. 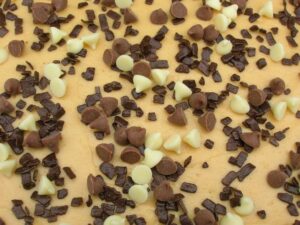 So what to make was the big question? Well it didn’t take me too long to figure out. Last week I couldn’t resist buying up a load of bananas I saw going cheap. Then, serendipitously, the very same day I saw the most amazing banana, chocolate, peanut butter layer cake on Buttaz Blog. Although I wasn’t quite ready to make anything as grand as that, it did form the inspiration for the flavours I wanted to use. I was going to make a banana cake with chocolate chips sandwiched together with peanut butter icing. At Christmas last year I’d made Dan Lepard’s Butterscotch Banana Cake, in muffin format for the guys next door, using that most excellent of books Short & Sweet. Well caramelising the bananas was a revelation and transforms a simple banana cake into something else entirely. Inspired by this, I upped the quantities, omitted the spices and nuts, added coconut and then some chocolate, of course. The icing I based loosely on a recipe by Eric Lanlard in Cox Cookies & Cake.

This is what I did it:

I can only describe the result as being the Rolls Royce of Banana cakes. It had a good crumb structure and was really light – so light in fact, as CT stated, that you could have a really big slice and not feel full. The taste was fairly sublime too and neither of us are ordinarily big fans of banana cake. The peanut butter icing I could have happily polished off with a spoon before ever it got to the cake, but I held fast. The flavours balanced out really well with the sweet, salt and bitter each playing their part. The individual flavours of banana, peanut, coconut and chocolate could be tasted separately, but also formed a sublime whole. As Alexander Dumas would have put it: “All for one and one for all”.

So get your pinnies on ready for Sunday and join in the fun.