You may well have done a double take when you read Marmite caramel brownies. But if you like sweet and salt together, you’ll like these squidgy pieces of deliciousness.  After all, who’s not a fan of salted caramel? They’re really not as peculiar as you might think. 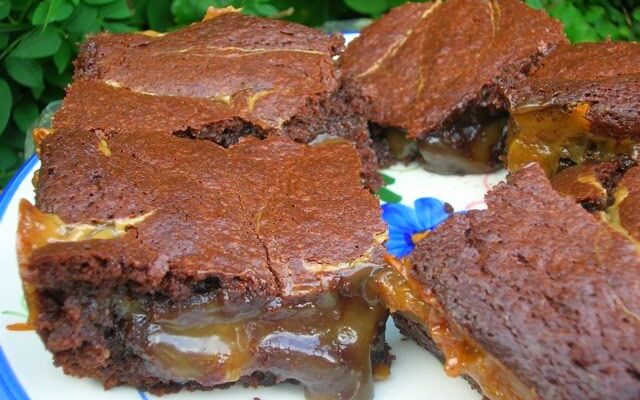 Marmite: Love It or Hate It?

Well, there is the great Marmite debate: love it or hate it? And then there is the even greater divide, chocolate with Marmite, yes or no?

I happen to be a big Marmite fan, as long as it’s applied sparingly, but combined with chocolate I’m not so sure. Or at least I was somewhat dubious until I was sent a bar of Very Peculiar to try. In case you’re unfamiliar with this, it’s Marmite chocolate. I like the combination of salt and sweet, but there’s a lot more to Marmite than just salt.

Very Peculiar is an apt name. The first bite tasted very peculiar indeed, the flavour of garlic and celery was there and took a bit of getting used to, but by my second bite I was getting something that was more akin to the taste of peanut butter.

Now peanut butter and chocolate is one of the flavours I’m really rather fond of. By my third bite, I was thoroughly enjoying it and had to put a stop to proceedings before I polished the bar off. Strangely the Marmite only came through as an aftertaste.

The chocolate is minimal, only 31% and the list of ingredients is long, but I found this strangely addictive and would not be averse to another bar or two. CT rather enjoyed it too and for a while I was worried it would never actually made it to the bake I was planning.

Along with the bar of Very Peculiar came a box of baking goodies which included, not surprisingly, a jar of Marmite. I was tasked with using the chocolate to create something delicious.

I took the remaining half of the bar and put it somewhere safe while I contemplated its fate. Remembering the delicious sea salted caramels I’d recently reviewed, I thought Marmite caramel might just work. Chocolate brownies made with Very Peculiar and oozing soft caramel was the vision that set my pulse racing. So Marmite Caramel Brownies it was.

The Marmite caramel was a triumph of perfectly balanced salt and decedent sweetness with a certain je ne sais quoi and it was all I could do not to tuck in straight away with a large spoon. Supertaster CT detected the Marmite, but my mother was none the wiser and just pronounced it to be delicious when I gave her a spoonful to try.

The brownies were true to my vision and completely scrumptious. They had the classic crunchy top and were running with caramel.

I had to try one warm from the oven and thought things really couldn’t get better than this. Despite the sweetness of the caramel, these were well balanced by both the Marmite and the dark chocolate. The Marmite gave a slight saltiness and a certain umami quality that we all liked, although CT was the only one who could actually taste Marmite.

The next day, they had formed a more fudgy consistency, but were just as good. These have to be some of the best brownies I have ever made. Although, to be fair, I say that for every new brownie I develop.

Follow this link for more Tin and Thyme brownie recipes. And if these really aren’t enough for you, I have well over a hundred on my Bake up a Brownie board on Pinterest.

Thanks for visiting Tin and Thyme. If you make these Marmite caramel brownies, I’d love to hear about it in the comments below. And do please rate the recipe. Have you any top tips? Do share photos on social media too and use the hashtag #tinandthyme, so I can spot them.

If you’d like more salted caramel recipes, follow the link and you’ll find I have quite a lot of them. All delicious, of course.

As these Marmite caramel brownies are thoroughly wicked, I’m sending them off to this month’s Calendar Cakes. It’s hosted by Dolly Bakes with the theme something wicked this way comes…. This monthly challenge is co-hosted at Laura Loves Cakes.

The Marmite caramel was perhaps the best I’ve ever made. As it was from scratch, I’m submitting the brownies to Javelin Warrior’s Made With Love Mondays.

Thanks to Beth from Splendid Communications for the bar of Very Peculiar and accompanying baking items which I was sent in order to create a Very Peculiar bake.