A delicious dish of toasted oatmeal, whipped cream, honey, whisky and raspberries. Scottish cranachan is quick and easy to make and deserves to be better known than it actually is. Serve it as a special occasion dessert. 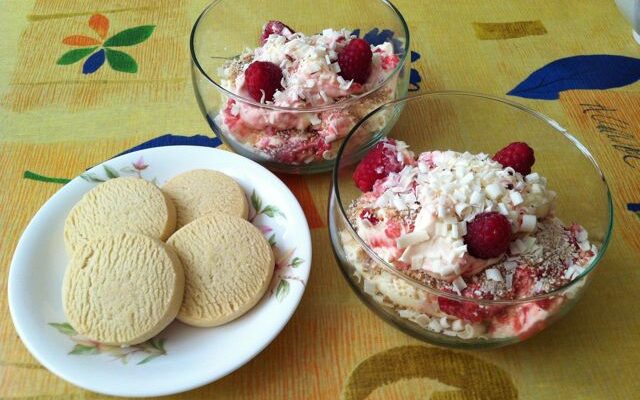 Janice of Farmersgirl Kitchen started us off with a very mastercheffy interpretation of cranachan. But there’s no way I ‘m attempting to compete with that. Even before I’d seen her entry, however, it was my first thought when I knew the next Best of British challenge was going to be Scotland.

It’s been on my list of things to make for years AND I wasn’t going to miss this opportunity to give it a whirl. For the uninitiated cranachan is a traditional Scottish celebration dish consisting of oatmeal, whipped cream, honey & whisky and sometimes raspberries. My version has raspberries.

For the Love of Bonnie Scotland

After Cornwall, Scotland is my second love. I’ve spent many a family holiday there over the years. One of my aunts lived in Stirling and we would make the long journey up from Cornwall to stay with her at least twice a year. The Castle, Bridge of Allan, Wallace Monument and nearby hills are not something I’m ever likely to forget.

She later moved to Edinburgh which was already full of family stories from my mother who was a student nurse there. And from what I can gather got up to plenty of high jinks. Edinburgh is my favourite city anywhere, I just love the way there is a great big mountain stuck right in the middle of it. King Arthur’s seat, as it is known, is the core of an ancient volcano.

We also had family in Fort William for a while and spent hours walking the surrounding hills, although I only got to climb Ben Nevis once. It’s the kind of wild remote beauty that I seem to crave.

Anyway, this is rather a rambling way of saying that I wasn’t going to miss this Scottish challenge!

Cranachan makes a fine note to finish off a Burn’s Night supper or to indulge in at Hogmanay. But it’s actually best served in the summer months when Scottish raspberries are in season.

Sadly my raspberries weren’t Scottish and I can’t claim that they swam down the West Coast to Cornwall as Janice did with her mackerel. But it is my version of a Scottish classic and I did use a good Scottish single malt whisky. I can no longer remember where I acquired it from, but I had a miniature bottle which was waiting for just such an occasion as this.

As I’ve already said, this is a really quick and easy dessert to put together. All you need to do is toast some medium oatmeal. You can do this in the oven or in a frying pan. It takes a while, but you do need to keep an eye on it as you want it lightly browned, but not burnt.

Then it’s just a case of whipping up some cream and stirring in some honey and whisky. I actually added some Greek yoghurt to mine to give it a bit more flavour and lighten it up a little. Finally swirl some crushed raspberries through and top with the toasted oatmeal. What could be simpler or more delicious?

As it’s relatively fast to put together, it’s best done not too long before eating. Raspberries have a fairly short shelf life and the toasted oatmeal is at it’s best when you eat it fresh.

I made this Scottish dessert as the grand finale to a special meal and served it with Highland shortbread. The cranachan crescendo was a delightful surprise. It was simply divine, a proper “stoater” said CT.

Thanks for visiting Tin and Thyme. If you make this recipe for Scottish cranachan, with or without the chocolate, I’d love to hear about it in the comments below. Do share photos on social media too and use the hashtag #tinandthyme, so I can spot them.

Best of British is a monthly challenge sponsored by The Face of New World Appliances and there is a £50 amazon voucher awarded to one lucky entrant each month. Here is the round-up to last month’s Best of British Cornwall.