A fruity yeasted roll, lightly spiced with saffron, integral to the Cornish town of Liskeard. These vegan saffron buns are delicious with butter, either warm from the oven, cold or toasted. 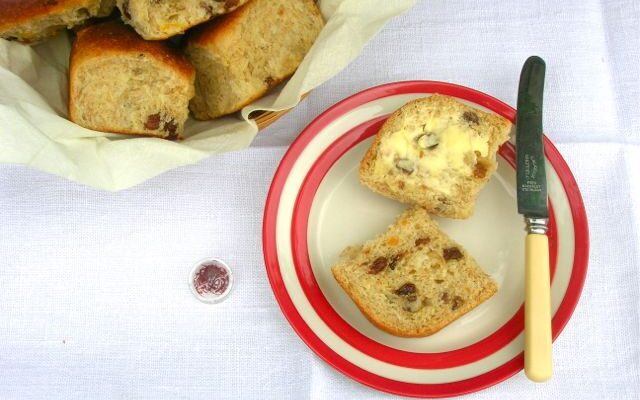 Once upon a time, many years ago, back in the 1960s in fact, or possibly the 1970s, reports are a bit vague, the Mayor stopped handing out the Liskeard Bun. This was an annual event when the newly invested mayor of Liskeard would hand out buns wrapped in brown paper bags to the local children.

What a lovely tradition. Read on to find out about the Great Cornish Bake Off and how we rediscovered the Liskeard Bun.

Earlier on in the year, rumours were alive that the hunt for the Liskeard Bun was on. The rumours were correct. Two intrepid Liskeard residents did a bit of sleuthing. The baker who used to make it was found, but the recipe remained shrouded in mystery.

A number of people remembered receiving them and described them as a round fruity yeasted bun that may or may not have had saffron in it. A recipe was found in Cousin Jennie’s Cook Book by local author Pamela Pascoe, written in 1976. This may or may not have been the original Liskeard Bun.

Some tough decisions to be made. Photo courtesy of John Heskyth.

Our intrepid sleuths thought it was time to resurrect the Liskeard Bun, or better still, create a new one. The challenge was issued and a new Liskeard Bun was to be announced on the day of Liskeard’s annual Ploughman’s Fair.

Excitingly, I had the fun and responsibility of being one of the three judges. Turns out I got to eat a lot of bun. I was also asked if I would make the saffron buns, Tesen Safron, from Cousin Jennie’s Cook Book for the event. So that’s what I did, but I made them vegan.

I’ve made Cornish saffron buns before, but these vegan saffron buns are a little different. There’s no chocolate for a start. The ingredients in the original recipe contain both lard and marg, neither of which I like to use. The former because I’m vegetarian and the latter because margarine is a particularly unhealthy fat.

So not only did I scale down the recipe and translate it into grams rather than ounces but I used sunflower oil as the fat. This had the added advantage of making the buns vegan which meant more people can enjoy them. I use my own candied peel, which has a nicer taste and texture than the peel sold in tubs. And of course I adapted the recipe to include some wholemeal flour.

Annoyingly, I didn’t quite get my act together to soak the saffron overnight, so the colour of these buns is more pallid that it otherwise would be.

The Great Cornish Bake Off

The day dawned fair, the town was alive with music and food stalls and three judges stood in the Mayor’s Parlour gazing at the array of fine looking buns wondering how they were ever going to choose a winner. Judging the new Liskeard Bun was a serious affair and we didn’t take our duties lightly. We looked, we prodded, we poked, we tasted, we scored, we discussed.

Bun remnants after the judging was finalised. Photo courtesy of Lorna Shrubsole.

One hour later we’d come to a decision. Well, several decisions; there was an adult category, an under sixteens and a professional one and we had to choose a first, second and third with an optional commended. I may not be Mary Berry, but I had a lot of fun.

If I had not been judging I might have submitted my Liskeardy Cakes – maybe next year. Guess which one drew accolades from the judges.? Here’s a clue, Liskeard Bun.

We brought the buns out onto a stall by Liskeard’s Fountain for everyone to taste. Pictures were taken and the winners were announced with much fanfare. Pamela Pascoe, author of the saffron bun recipe I adapted was there to award the top prize of an engraved glass cake stand. That really put the cherry on the cake.

Thanks to our two entrepreneurial sleuths, we now have a new Liskeard bun and the next stage in the story awaits. Watch this space.

Thanks for visiting Tin and Thyme. If you bake these vegan saffron buns, I’d love to hear about it in the comments below. Have you any top tips? Do share photos on social media too and use the hashtag #tinandthyme, so I can spot them.

For best results with both flavour and colour, be sure to soak the saffron overnight.Contains no egg or dairy, so suitable for vegans.Adapted from Saffron Cake by Pamela Pascoe in Cousin Jennie’s Cook Book.Please note: calories are per serving. They’re approximate and will depend on exact ingredients used.

I bought the fresh yeast from my local baker which is just a two minute walk away. The wholemeal flour comes from Cotehele Mill, not far away in the Tamar Valley. So, I’m entering these vegan Cornish saffron buns into Shop Local over at Elizabeth’s Kitchen Diary.

As this was our very own Liskeard Bake Off, I’m going to be cheeky and enter my Liskeard Bun into Treat Petite which is all about The Great British Bake Off, this month. I’m hoping Kat at The Baking Explorer and CakeyBoi will allow it.

Thirdly, my vegan saffron buns go towards the ever groaning table at Tea Time Treats which this month is all about Summer Baking.

Down in these ere parts, the Cornish often refer to saffron buns as saffron cakes. So whilst these vegan saffron buns are not strictly cakes, I’m hoping they’ll be eligible for Love Cake over at JibberJabberUK anyway. The theme is Pack me a Picnic and these buns or cakes are ideal portable picnic fare.