Every county in the UK will have a regional recipe or two, but Cornwall has a wealth of them. It’s famed for its dairy, saffron, fruit, cauliflowers and potatoes as well as fish. It’s also a poor county so the thrifty folk of Cornwall had to be inventive with their frugal fare to come up with something interesting and delicious. Read on to find 14 Cornish recipes made by our Best of British participants. 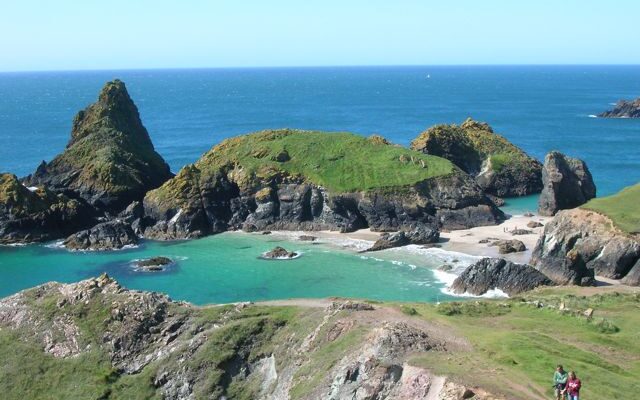 Clotted cream and pasties vied for centre stage in this round-up of Cornwall’s Best of British. I was pleased to see that seafood, cheese, honey and fruit made an appearance too – all good Cornish produce. I noticed that hevva cake didn’t make an appearance nor even Cornish fairings for that matter. We did get saffron buns and stargazey pie though. I guess you can’t have everything.

In total there were fourteen fabulous entries, thank you all. Fiona is also doing a round up of these 14 Cornish recipes, the first ever Best of British challenge over at The Face of New World, so do check out her blog.  The next challenge is for Scottish food which will be hosted by Janice. Lots of lovely produce to choose from there. You can find out more at Farmersgirl Kitchen.

Pasties and Cornwall seem to be synonymous in most people’s minds. They were certainly the most popular entry here, so I thought I’d better do a little background research. According to Lindey Bareham in her book Pasties, pasty is an old English word for a meat pie made without a dish. Due to Cornwall’s far flung location, the name continued to be used here after it had died out in most other places.

The pasty is of course well known for being the staple food of Cornish miners. A meat, onion and swede filling wrapped inside a pastry case. The key is the crimped “handle” which was used to hold the pasty whilst eating with dirty hands. This part was then discarded along with any adhering contaminants such as arsenic.

I’m a vegetarian so my idea of a good Cornish pasty is a cheese and onion one, which is definitely not traditional. My mother, however, is a bit of a fan, so I do know what a typical Cornish pasty should be like. It should have a juicy filling with a pastry case which is crusty on the outside and tender on the inside.

The meat should be beef steak, cut into chunks, never minced with sliced or chopped potatoes, chopped onion and chopped swede – known as turnip in Cornwall. Ingredients are layered raw onto the pastry case and seasoned with salt and pepper.

The pasty is then sealed by crimping the sides together along the top or along the edge and then baked. Crimping is a bit of an art and is taken very seriously. Whether the crimp should be at the top or on the side is still hotly debated. In 2011, the Cornish pasty was awarded PGI (Protected Geographical Indication) status by the EU, which protects it from being made anywhere outside Cornwall.

Interestingly, they say that the crimp must be on the side. This is probably because it’s easier for large scale bakers to make them this way. Home bakers, on the other hand, often prefer the top crimp which makes for a plumper pasty. But it’s more fiddly to do.

Personally, I’ve never been able to make a decent pasty, my pastry falls apart and I’m rubbish at crimping, so I’m truly impressed with the abilities showcased here.

I can now make delicious pasties with relative ease. I have a fabulous new wholemeal pastry recipe that never lets me down. Take a look at my squash chilli chard feta pasties for more details.

Fiona of London Unattached, whose brainchild this Best of British challenge is, felt suitably responsible and kicked these 14 Cornish recipes off with her Somerset version of the Cornish pasty as made by her mother. Crimped on the top and containing no swede, Fiona has made it with her first ever flakey pastry, which worked a treat.

Karen of Lavender and Lovage also had a hand in dreaming up this challenge. She decided to showcase Davidstow Cheddar with her mum’s cheese and potato pie – made by her mother just as she used to make it when Karen was growing up in Cornwall. On the other side of Bodmin Moor, my mother used to make something very similar and I can vouch for it being great vegetarian comfort food.

Less well known than the pasty, stargazey pie is another Cornish classic. I wasn’t really expecting anyone to give this a go, so I was delighted when Claire of Under the Blue Gum Tree made this prawn and Kingklip stargazey pie and all the way from South Africa no less. There is a strong link between Cornwall and South Africa as many Cornish miners were highly regarded for their expertise and went on to work in the gold fields and diamond mines. Traditionally made with pilchards, this pie has the fish heads poking out of the pastry crust and “gazing” at the sky. Claire has used prawns instead and why not?

Clotted cream is another ingredient we are very lucky to have in abundance in Cornwall. I grew up with it and have always missed it when living elsewhere. Janine of Cake of the Week was also feeling homesick for Cornish food, so decided to showcase one of the things she could get: clotted cream. Her format of choice was a cake for the Jubilee. Her strawberry and clotted cream Jubilee cake has a right royal wow factor.

I couldn’t let this opportunity pass me by without trying something I hadn’t made before. Cornish splits are the traditional vehicle for carrying cream and jam for the highly renowned Cornish cream tea. They’ve been much neglected in recent years in favour of the easier to make scones, so this seemed like the ideal time to stage a revival. I also managed to use a number of Cornish ingredients, including Cornish sea salt.

Clotted cream and strawberries continue their meteoric rise with this Cornish strawberry-rhubarb tiramisu from Chris of Cooking Around the World. A very special tiramisu this is, not only does it feature delicious Cornish ingredients, but it doesn’t contain coffee. This means I can make tiramisu AND be able to eat it. Do hop over to Chris’s post if you haven’t already done so as he has some lovely pictures of a sunny Cornwall – not something we’ve seen much of recently!

Enough of the sweet stuff, we’re back to seafood with this smoked mackerel kedgeree from Janice of Farmersgirl Kitchen. Mackerel is one of the fish that Janice associates with Cornwall. She was unable was unable to source Cornish mackerel for this dish, but figured that the Scottish mackerel she used had quite likely swum up past the Lizard, so could be counted.

Once visited, Cornwall is not easily forgotten and Chris of Cooking Around the World, found that once he started thinking about Cornish food, he couldn’t rest until he’d made a pasty. Having taken an Italian dish for his first entry and turned it into a Cornish one, he reversed things this time by using olive oil and rosemary in this Cornish icon. Do visit his blog to find out what other surprising ingredients made their way into this pasty.

And here we go with another pasty in this round-up of 14 Cornish recipes. This time on Lavender and Lovage where Karen’s enthusiasm knows no bounds. In her second entry, she gives us the secrets of her friend Annie’s true Cornish pasty. There is plenty of information to be found about Cornish pasties in her post, so do take a look. A word of warning though, she is passionate about the side crimp, so I have to be careful we don’t come to blows.

At last a pasty I can eat! Fellow Cornish blogger Natalie of the Hungry Hinny came up with this most delicious take on the Cornish classic – mushroom, cheese and potato pasties. Filled with thyme and sweet potato as well as the title ingredients, this pasty used Davidstow cheddar and was given the full crimping treatment. Tis a real pasty, me han’some.

Another Cornish blogger, Beth of Jam and Clotted Cream decided to use Cornish honey from the Tregothnan estate in her entry. Tregothnan is mostly famed for its tea production, but it does have a number of other enterprises, including beekeeping. Beth reckons her ginger spiced honey cake would be especially good served warm with a dollop of Cornish clotted cream ice-cream. I’m definitely up for giving that a go.

I was really hoping someone would make saffron cake, another of Cornwall’s well kept secrets and something I’ve not yet got around to making. I wasn’t to be disappointed. Jill of Lapin d’Or and More, blogging over the border in Devon, came up with her own interpretation – one that included less sugar and less fat. Her saffron buns turned out a beautiful pale yellow and sound delicious.

As we started our 14 Cornish recipes with a pasty, we will end with a pasty – of sorts! Susan of the delectable blog, A Little Bit of Heaven on a Plate was a little concerned that Cornwall would be up in arms about her splendid rustic Cornish pastie pie.

I don’t know why. It has all of the classic Cornish ingredients you’d expect and looks absolutely magnificent. It’s just that lugging such an enormous pie down the mine might have proved a little difficult. They like things bigger in Lancashire apparently.

And the Winner is …

Sponsored by The Face of New World, we have a £50 Amazon voucher for one lucky entrant who has been picked at random using Random.Org. There will be another £50 voucher next month and so on for the first six months of the challenge. At the end of the process entries submitted over the whole six months will be judged with a grand prize of a £300 voucher.

So, congratulations go to ………. The More Than Occasional Baker.