CT recently returned from a trip to York. Whilst there he popped into Bettys Tea Rooms for a cuppa and a curd tart. Fat rascals are a classic Yorkshire bake and one that I very much associate with Bettys. I’ve never actually tried one, so in order not to feel left out, I decided to have a go at making some. 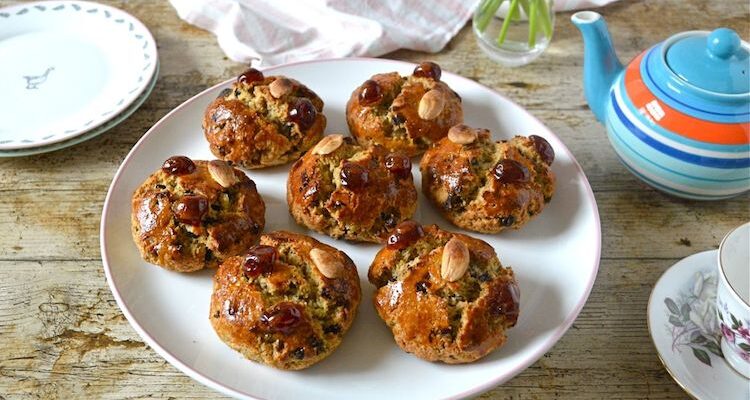 Fat rascals are a type of tea cake that originated in Yorkshire in the early 1800s. They appear to have encompassed pretty much anything that contained flour and fruit. The modern one, however, is a rich fruited scone-cum-rock cake. They became famous when Bettys created a recipe for them in 1983; it remains a closely guarded secret.

I had a good trawl around for an authentic fat rascals recipe, but every one I found was different. Some included eggs and some didn’t. The same went for candied peel and the type of dried fruit used. Double cream even featured in a couple.

I ended up doing my own thing, but you might find Karen’s fat rascals recipe over at Lavender and Lovage worth a look. I used a combination of spelt, plain and coconut flour, swapped the milk or double cream for crème fraîche and cheekily added some apricots to the mix.

These Yorkshire fat rascals may not be an authentic recipe, but they sure tasted good. The consensus amongst those that tried them, was that they were more of a rock cake than a scone. Either way, they were good on their own, with or without butter and especially when warm from the oven.

It turns out that CT is plotting a return visit to Bettys this very week. Maybe he’ll try the authentic fat rascals and can comment on the authenticity or otherwise of my version. No matter, he scoffed mine without complaint; he’s a bit of a fat rascal himself, you see.

CT remembered and brought me back a Bettys fat rascal from York. As you can see it didn’t look much like mine, but although it was good, we both reckoned mine was better.

Thanks for visiting Tin and Thyme. If you make these Yorkshire fat rascals, I’d love to hear about it in the comments below or via social media. Do share photos on your preferred social media site and use the hashtag #tinandthyme, so I can spot them.

I’m sharing these Yorkshire fat rascals with #CookBlogShare which is hosted this week by Monika at Everyday Healthy Recipes.