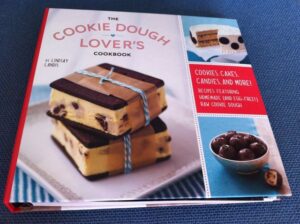 When asked if I’d like to review a copy of The Cookie Dough Lover’s Cookbook, I was intrigued. A whole cookbook dedicated to raw cookie dough? Well it appears that the author, Lindsay Landis, is a cookie dough fanatic. I have to confess some sympathy here as I often think licking out the bowl is the best bit.

The book is spiral bound, but with a hard cover and spine which makes it much easier to file in the bookshelf. It also makes for easy use with the pages staying firmly open where you want them. There is a short introduction on cookie dough and what the book is about. Reassuringly, the first thing you learn is that the dough is eggless so there is no need to worry about eating it raw. Bearing in mind that cookie dough is the whole purpose of the book, this is just as well. There are chapters on: candy, cookies and brownies, cakes, custards and pies, frozen treats, indulgent breakfasts and party fare. Every recipe contains cookie dough either in, on top or underneath. Who would have thought cookie dough was so versatile? Peanut butter and chocolate thumbprint cookies anyone? I found the recipes fun and inventive but also well written and easy to follow.

Although not all recipes have a picture of the finished product, there is a goodly number that do. The photographs are attractive and not as artificial looking as some; they make you immediately want to cook or eat more than is good for you. They make the book a real feast for the eyes and were taken by Lindsay herself. More of her recipes and photography are available on her blog Love and Olive Oil.

I was a little surprised to see the measurements are all in cups; I hadn’t realised the book was aimed primarily at the US market. Luckily I had the wonderful measuring spoons that Jac gave me, so it wasn’t as difficult as it might have been. I was a little disappointed though.

There were several recipes that appealed to me, but I opted to try out the chocolate chip cookie dough brownies first. I made about half the amount specified, though it was hard to split the cup measures. As a result, I made slightly more than half of the brownie mixture. I also used wholemeal spelt instead of white flour in the brownies as I like the texture and slight nutty quality it brings. For the cookie dough, I omitted the vanilla as I was using cardamom sugar.

I had a feeling my brownies wouldn’t look anything like as good as the ones in the book and I was right. I know part of that is my own impatience, which is perhaps why I am neither a stylist nor a photographer.

The first thing I noticed when biting into these, was that brownies straight from the fridge are not nearly as nice as those at room temperature. They have less taste and a cold hard texture – I won’t make that mistake again. I also realised that I prefer my brownies straight and not with extras on top of them. The cookie dough and chocolate were a great combination, but all three together just didn’t do it for me.

The brownies reminded CT of cake truffles. He thought they were delicious, but later admitted he preferred eating the layers separately. The brownie worked as a brownie, whereas the cookie was redolent of Ben & Jerry’s cookie dough ice-cream which is a firm favourite of his. So in essence, I think he agrees with me.

I will certainly be making cookie dough again, but next time I will be trying out Lindsay’s cookie dough truffles, which I think will work much better.