Traditional Cornish saffron buns made with a mix of wholemeal and plain flour. These lightly fruited yeast buns are easy to make, though you’ll need time to infuse the saffron and prove the dough. They’re particularly nice jazzed up with a few chocolate chips, but that’s entirely optional. 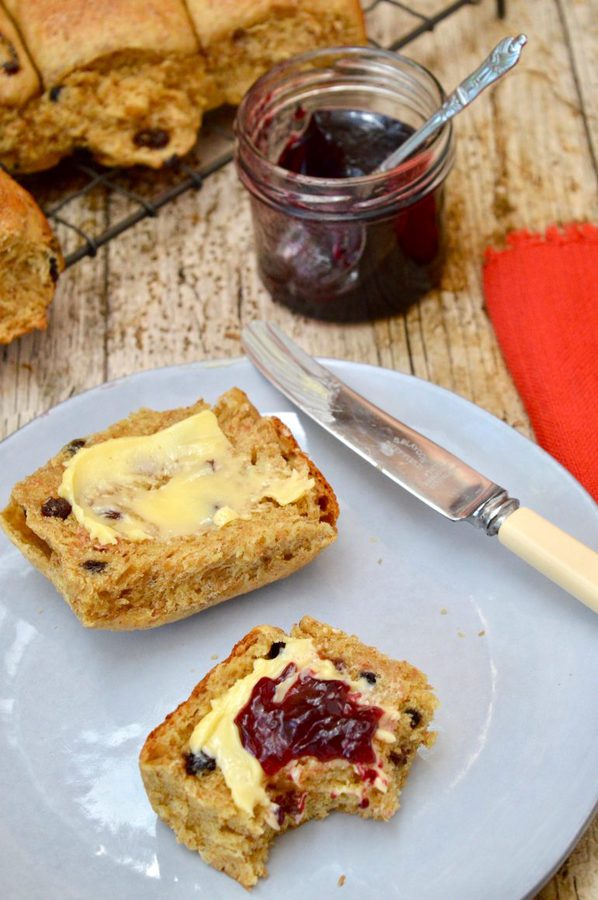 Saffron with its bright yellow hues and subtle floral and bitter notes is a spice which seems singularly exotic. But it has long been associated with Cornwall. It’s said that the Cornish traded with the Phoenicians way back when, exchanging tin for saffron and it’s been used here ever since. This may or may not be true, but saffron was a highly popular ingredient in the Middle Ages and saffron crocuses were grown in Bude until the late 19th Century.

To me saffron is associated indelibly with saffron buns, a traditional Cornish bake and whenever the spice is mentioned, that’s what I think of. I grew up with them as a commonplace treat and every Cornish bakery worth its salt (or should I say saffron) will display a pile of tempting yellow buns. In true Cornish style, these are often eaten with clotted cream.

I don’t actually know how Cornish saffron buns are so yellow. Mine have a yellow hue, but never turn out to be particularly bright. I can only assume that commercial bakers use something in addition to saffron to get that colour.

Shockingly, I’d never baked saffron cake or buns until a few years ago. St Piran’s Day was fast approaching and I thought it was about time I got on with it. Once I made these Cornish saffron buns and realised how simple they are to make, I now bake them at last once a year.

The recipe originally came courtesy of the Cotehele miller, Sally Newton, whose flour I buy regularly. The wheat is grown locally and is stoneground at Cotehele Mill on the Cornish side of the River Tamar. True to form, I adapted the recipe. My saffron was not Cornish grown for starters and I used my own homemade candied peel. Wholemeal flour had to go into the mix for sure, but I used a higher proportion. Initially, I also substituted some of the dried fruit for chocolate. Well why not?

The buns are absolutely scrumptious. I find many of the ones you can buy are far too sweet. These are only lightly sweetened which makes them perfect for ladling on your favourite jam. I can highly recommend this hedgerow jelly which you can see in the photo below. Having said that, CT and I often enjoy them warm with a liberal helping of butter and no jam. Sometimes it’s jam and clotted cream.

The buns may not be super yellow, but when you bite into one, you know the saffron is there. It has a distinctive flavour which is hard to describe, but it’s integral to the taste of these Cornish saffron buns. In fact, chocolate and saffron seem to play off each other very well. At least in this instance. I don’t always include chocolate, but sometimes it’s just the thing.

If you’re used to working with yeast, you’ll find these Cornish saffron buns are really quite simple to make. If you’re not, this recipe is a good one to start with. You need plenty of time as it’s best to infuse the saffron in milk for several hours prior to preparing the dough. But you only need to knead the dough once.

Once you have your golden milk, you’re ready to go. You need to rub some butter into the flour before you can then throw everything into the bowl and knead. I use a stand mixer these days, but I always used to knead by hand. The choice is yours.

As soon as the dough is nice and elastic, divide it into twelve and shape into balls. Place on a tray and leave to rise until doubled in size. The warmer it is the faster the buns will rise. I prefer a slow rise as it gives a better texture and flavour, so I don’t put them in a particularly warm place.

Once risen, just pop them in to a hot oven and bake for about twenty minutes. That’s it, job done.

What’s the Best Yeast to Use?

Fresh yeast or active dried yeast are by far and away the best yeasts to use. Instant yeast contains unspecified additives and I try to stay clear of it. The main reason for using instant yeast is that you don’t need to dissolve it in water first. But it’s actually a good idea to dissolve your yeast in water as this will tell you if it’s active or dead. If it doesn’t froth or show any other signs of life after fifteen minutes or thirty at most, it’s not going to get your dough to rise.

Personally, I like fresh yeast, but it’s not always that easy to get hold of. I buy mine from our local baker. But that’s not always convenient or even possible, so I have a tin of active dried yeast in the cupboard as a standby.

Thanks for visiting Tin and Thyme. If you bake these Cornish saffron buns, I’d love to hear about it in the comments below. Have you any top tips? Do share photos on social media too and use the hashtag #tinandthyme, so I can spot them.

Please note: calories are per serving. They’re approximate and will depend on exact ingredients used.

Bloggers Around the World is celebrating all things British this month, so although Cornwall would love to be its very own country, it does at the moment contribute its saffron buns to British cuisine. This is a monthly event from Chris of Cooking Around the World.

Not only did the flour come from Cotehele Mill, but the original recipe did too. I am thus submitting it to Shop Local with Elizabeth’s Kitchen.

Made from scratch as these are Cornish saffron buns are, I’m sending them off to Javelin Warrior’s  Cookin w/Luv for his Made With Love Mondays.