Baked on the stove top rather than the oven, wholemeal spelt Welsh cakes are super easy and simple to make. They’re crisp on the outside, soft and buttery on the inside and incredibly moreish. 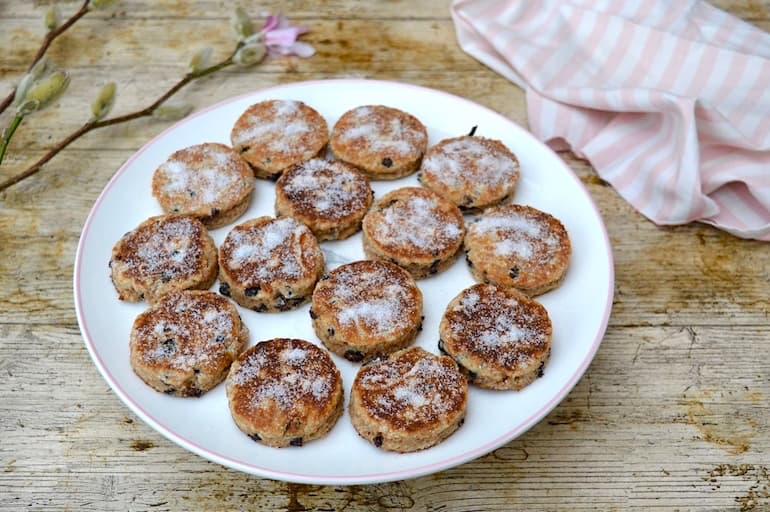 It may be cold and blustery outside, but I’m noticing signs of spring here, with snowdrops and even daffodils emerging. This combined with the fast approaching, St David’s Day on 1 March put me in mind of Wales’ national bake, Welsh cakes. This wonder food from the west is the perfect antidote to the Beast from the East.

If you’ve not tried or even heard of Welsh cakes, they’re little rounds of buttery deliciousness studded with dried fruit – sort of a cross between a sweet scone and a pancake. They’re made on the stove top rather than in the oven. Not so very long ago, when homes didn’t have their own ovens, cooking over an open fire was the only option. Bread and cakes were made on a griddle or bakestone.

These wholemeal spelt Welsh cakes are not exactly traditional, but they’re my tribute to a nation that has the good sense to choose the leek as its national vegetable.

The Beast from the East

At the weekend, we took advantage of the clear blue skies and spent our time outside in the garden. This cold bright weather is my absolute favourite and as long as I wrap up warm and keep moving, I want to be out in it. Clearing brambles and ivy kept us both busy and warm, but on Sunday afternoon, we felt we needed a break and took off over the Forest for a brisk walk.

When we got back, we needed something sweet and comforting that was quick and easy to put together. These wholemeal spelt Welsh cakes hit the spot. They’re the perfect comfort food: not too sweet, nourishing and filling.

If you look at most recipes for Welsh cakes, plain or self-raising are the flours of choice. I prefer to feel nourished by my food so I use wholemeal spelt flour. I also like the nutty quality that wholemeal and spelt in particular bring to bakes.

For the dried fruit, I went with tradition and chose currents, but sultanas or raisins would be fine. I went easy on the sugar; enough so that we knew we were eating something sweet, but not so much as to make us feel the cakes veered towards unhealthy.

Untraditionally, I added a little spice to my wholemeal spelt Welsh cakes. Again, not so much that the flavour dominated, but just a hint to enhance the buttery sweetness of the cakes. I also used yoghurt instead of milk. It adds a certain flakiness to these types of bakes, something I discovered when I first made the wonderful flaky pastry I use in this gooseberry galette.

The cakes take only minutes to cook in the pan and you can tuck into the first batch of warm cakes whilst the second batch is cooking. I’d envisaged eating just two or three each, then freezing the rest for another day. But oh no, we were so cold and hungry from our walk in the freezing wind, we ended up eating the entire batch of 22. Call us greedy, but they were irresistible.

So, if you’re planning on making these wholemeal spelt Welsh cakes, just make sure you have a few others in the house to share them with.

It may be an inappropriate moment to mention an English hero when waxing lyrical about Welsh cakes, but bear with me. My previous attempt at Welsh cakes led to charred fare worthy of King Alfred. Oh yes, I burnt the cakes. The secret, I’ve realised ruefully, is to go easy on the chocolate, like none at all.

It’s also important to curb your enthusiasm; bake these wholemeal spelt Welsh cakes over a moderate heat. A griddle or cast iron pan would be wonderful, but I made do with a non-stick ceramic pan, as that is all I have.

Thanks for visiting Tin and Thyme. If you make these wholemeal spelt Welsh cakes, I’d love to hear about it in the comments below. And do please rate the recipe. Have you any top tips? Do share photos on social media too and use the hashtag #tinandthyme, so I can spot them.

If you’d like more scone recipes, follow the link and you’ll find I have quite a lot of them. All delicious, of course.

Best eaten warm from the pan and definitely on the day of baking, but can be frozen if needed.Please note: calories and other nutritional information are per serving. They’re approximate and will depend on exact ingredients used.

They also go to #BakeOfTheWeek with Casa Costello and Mummy Mishaps.

And #BakingCrumbs too over at Only Crumbs Remain.