Who needs scones when you can have traditional Cornish splits instead? Soft and slightly sweet yeasted bread buns are the perfect vehicle to load up with jam and cream. Please note, jam first, cream on top! 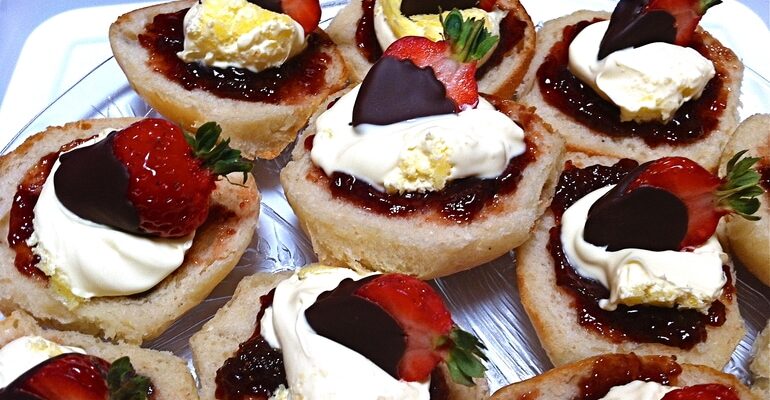 Now what could be more perfect for a Cornish cream tea or English tea party than these Cornish splits? A Diamond Jubilee street party was not something we thought we would be attending. We’d planned to use the additional time to catch up down at our plot. But at the last minute we received an invite to a small party just up the road and we thought it would be churlish to refuse.

As Cornwall is the first (and dare I say best) county in the UK, it’s no surprise that Kernow kicks things off. I am somewhat partisan, I confess – Cornwall is my home after all.

So to the challenge. I am looking for you to showcase something that embodies Cornish food. This could be the good old Cornish pasty, or for those that love fish, Stargazey pie. For those with a sweeter tooth, there is of course saffron cake or how about a good Cornish cream tea? Not forgetting, of course, that the jam goes first with a hefty dollop of clotted cream on the top – unlike the heathen practices of other counties.

Or you may prefer to use some great Cornish ingredients. Famed for its dairy, seafood, vegetables and soft fruit, Cornwall has a wealth of fresh and delicious produce to choose from. Our new potatoes are second to none, our cauliflowers famous and I had my first punnet of local juicy and flavoursome strawberries this weekend.

Everyone knows about clotted cream, but we also have some amazing cheeses, including Cornish Blue, winner of the World Cheese Awards 2010, Yarg, a semi-hard cheese wrapped in stinging nettles, Cornish Camembert, Allet Dairy Goat’s Cheese, Cornish Gouda and the Cornish Crackler, an award winning cheddar.

You still have until 15th June to enter this challenge. It’s not only a chance to show off your Cornish inspired creations, but you can also win £50 worth of Amazon vouchers.

I’m not sure how local chocolate is to Cornwall, but I’ve endeavoured to sneak it in anyway!

I’d been planning on baking Cornish splits for my entry into Cornwall’s Best of British challenge, so this seemed like the perfect opportunity to make them. I had Cornish sea salt, Cornish strawberry jam, Cornish Strawberries and Cornish clotted cream to use.

So what exactly is a Cornish split? It’s a yeasted almost bread-like bun which pre-dates the Johnny come lately scone as the original receptacle for jam and clotted cream. And I do mean the Cornish cream tea. It’s jam first every time, whatever they say in Devon.

I had to get chocolate in, of course Now how best to do it? I thought I’d try substituting some of the butter with white chocolate as mentioned by Dan Lepard in his wonderful book Short and Sweet. He’d referred to it as a lard substitute, but what the heck.

Turns out Dan is absolutely right. I’ve used it in many yeasted bakes subsequent to making these Cornish splits and it really works. Just take a look at my Liskeardy cakes.

So this recipe is how I make Cornish splits and like Frank Sinatra, I did it my way.

As well as the obligatory strawberry jam and clotted cream, I thought some chocolate dipped strawberries would provide a nice finishing touch.

For these, all you need to do is cut strawberries in half and dip the bottoms in melted chocolate. Lay them on greaseproof paper until they’ve set.

The storm abated as we trudged up the hill with the Cornish splits safely ensconced in a weather proof box. The party had migrated under cover and there was little space on the groaning table for my offering. I needn’t have worried as they disappeared really quickly. In fact they were a roaring success. I was particularly pleased when a local farmer’s wife, who has been making them for many years gave them her seal of approval.

The splits were soft and slightly sweet and made the perfect foil for the lashings of jam and cream. The dipped strawberries were perhaps not the most elegant, but when they were perched on top of the cream, they looked just right. All in all, I have to say I was quite proud of my first attempt at Cornish Splits.

Thanks for visiting Tin and Thyme. If you make these Cornish splits, I’d love to hear about it in the comments below. And do please rate the recipe. Have you any top tips? Do share photos on social media too and use the hashtag #tinandthyme, so I can spot them.

If you’d like to see some more bread recipes, follow the link and you’ll find I have quite a lot of them. All delicious, of course.

Do feel free to use your preferred method of kneading. This one requires little effort, but produces a good result.Please note: calories and other nutritional information are per serving. They include the jam, cream and chocolate dipped strawberries. However they’re approximate and will depend on exact ingredients used.

I’m also entering this for the fabulous Tea Time Treats table which has a summer fruits theme this month chosen by Kate of What Kate Baked. Karen of Lavender and Lovage is also running a giveaway on her blog to coincide with this month’s theme.

Working London Mummy has chosen strawberries as this month’s One Ingredient, so how could I resist? Nazima co-hosts this monthly challenge with Laura of How to Cook Good Food.

The monthly Simple and in Season hosted by Ren of Fabulicious Food is being guest hosted this month by Laura of How to Cook Good Food. And as Strawberries are very much in season during June, I am sharing my splits with this one too.

Finally (I think), I am also submitting my Cornish splits to Javelin Warrior’s Made with Love Mondays where all submissions must be made entirely from scratch.