Despite the unprepossessing name that Cornish Hevva Cake is sometimes given, this lightly fruited bake is not particularly ‘heavy’. It is, however, absolutely delicious. The bake falls somewhere between a sweet scone and a light egg-free fruit cake. As with many traditional bakes, Tesen Hevva (its Cornish name) is very easy to make. 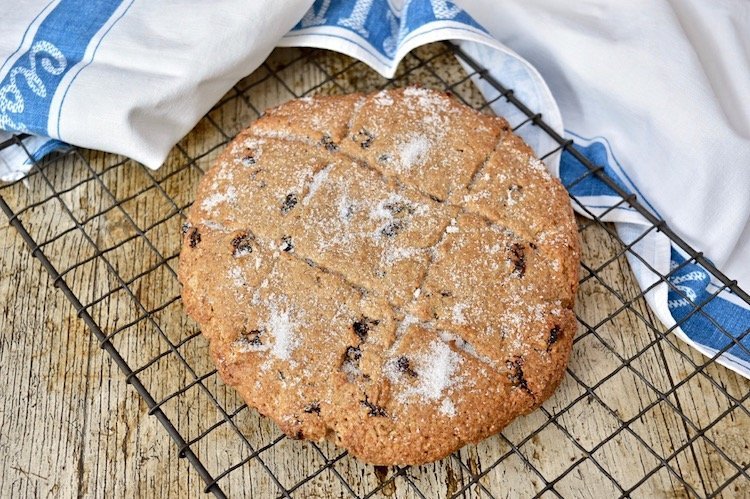 Well Cornwall’s national day, St Piran’s Day, is here again and I’d like to wish all my Cornish friends and readers a Happy Gool Peran. Cornish Hevva cake is one of my favourite Cornish bakes, so it seems a fitting and tasty way to celebrate the day.

St Piran is one of the patron saints of Cornwall and also of tin miners. The 5th of March used to be a feast day and holiday for ‘tinners’. Today you’ll find Saint Piran’s Flag flying high all over the county, along with various processions, dancing, music and poetry. You might even be able to indulge in the odd pasty or two.

Cornish hevva cake is an old Cornish recipe. It was traditionally made by fisherman’s wives to welcome their husband’s home from a successful fishing trip. A cliff top ‘huer’ looked out for shoals of pilchards (silver sardines). When he or she spotted a shoal, they’d alert the fishermen by shouting ‘heva, heva’ and guide them to it using gorse branches.

Heva is a derivation of the Cornish ‘hes va’, which means something like ‘there’s a shoal here’. As soon as the womenfolk heard the cry, they’d start baking their ‘tesan hevva’ to serve hot with a ‘dish of tay’ when their men arrived home.

Heva became hevva and later morphed into the anglicised version ‘heavy’. It’s really not a heavy cake at all, but neither is it light and spongy. It’s a simple and frugal bake with no eggs or spices, just flour, fat sugar and currants. The main thing that distinguishes this bake from similar ones across the country is a criss cross pattern marked on the top of the cake to represent a fishing net.

To Leaven or Not to Leaven?

There’s much controversy as to whether baking powder should be used in a Cornish hevva cake. Some say yay and some say nay. I say that traditionally, ‘tesan hevva’ is likely to have been an unleavened cake. But when baking powder became widely available in the mid 19th century, I expect it found its way into all sorts of bakes, including Cornish hevva cake.

My version is made with wholemeal spelt flour and a little baking powder. I’m continuing the tradition of being untraditional.

A traditional Cornish hevva cake would be quite large. This is a modest version which will give six decent portions. But if you have a crowd to feed, just double or even triple the quantities. If you make a larger cake, you’ll need to bake it for a bit longer than the recipe states.

I usually have a bag of currants in the cupboard, but in the middle of making this Cornish hevva cake, I was surprised and annoyed to find I had none. I had to use raisins instead. Currants used to be the cheapest option when it came to dried fruit, although they seem to be just as expensive as sultanas and raisins these days. I’ve seen a few modern recipes that contain raisins, but traditionally it would have been currants.

Mixed peel is another of those odd ingredients that unfussy CT doesn’t like. Beetroot and semolina are the other two. I like cakes that contain mixed peel, but I’m more than happy to substitute it for lemon. I’ve seen family recipes for Cornish hevva cake that contain one or other of these ingredients and some that have neither. I guess it depended on what was available at the time. That’s usually how I cook, anyway.

If you’re feeling really adventurous, you could have a go at making your own candied peel. It’s way better than shop bought.

How to Make Sour Milk

Sour milk is great for baking. It reacts with baking powder to create lots of bubbles. This in turn helps to raise and lighten cakes, soda bread, scones and pancakes. When we were lucky enough to have a supply of raw milk, I used to have a steady flow of sour milk. Raw milk if left a while, sours naturally.

I find it’s a bit hit and miss with pasteurised milk, occasionally it sours if left long enough, but more often than not it just goes off. You can tell by the smell and taste of the milk. If it smells rotten, it probably is. But if it’s just gone sour, it’s absolutely fine for baking.

These days I tend to use kefir when a recipe calls for sour milk or buttermilk. I have an almost endless quantity of kefir and it works very well. Needless to say that’s what I used instead of sour milk in this Cornish hevva cake. However, if you don’t have any kefir to hand, it’s incredibly easy to make a ‘cheat’s’ version of sour milk.

Just add 1 tbsp of lemon juice or vinegar to a measuring jug. Top it up to 250ml with milk. Stir and leave at room temperature for 5 minutes. By then it should have curdled and thickened slightly, which is just what you want. This works as a buttermilk substitute as well.

I’m sharing my Cornish hevva cake recipe with Jo’s Kitchen Larder for #BakingCrumbs, JibberJabberUK for #LoveCake, Casa Costello for #BakeOfTheWeek and Recipes Made Easy for #CookBlogShare.

Thanks for visiting Tin and Thyme. If you make this delicious Cornish heavy cake, I’d love to hear about it in the comments below. And do please rate the recipe. Have you any top tips? Do share photos on your preferred social media site and use the hashtag #tinandthyme, so I can spot them.

If you’d like more fruit cake recipes, follow the link and you’ll find I have quite a lot of them. All delicious, of course.