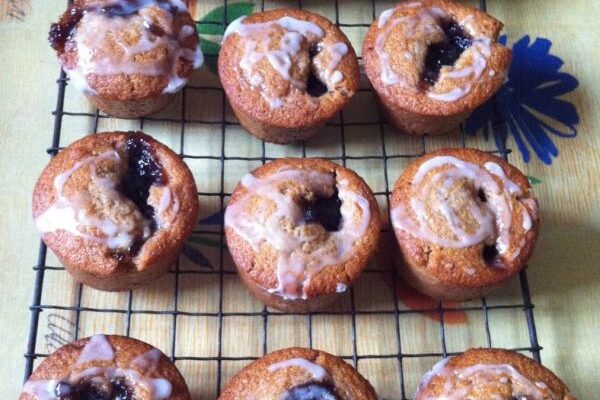 When I saw Phil’s We Should Cocoa entry in the orange challenge from his blog As Stong As Soup in December, I couldn’t resist making these nonnettes for my mother’s birthday.

Nonnettes, it seems, are little known outside of France. I searched on google for more information and alternative recipes, but Phil’s was the only one I could find in English. I gave up after page six. The name means “little nuns” and they are a speciality of Dijon in France. They’re little spiced honey cakes made with marmalade and rye flour and unusually, no eggs.

To use up the rest of the orange zest (I did have a very large orange) as well as the 4 eggs whites left over from making the trifle, I also decided to make friands as I’d not made those before either. Friands are little cakes that contain only egg white. They’re Australian but are influenced by France where they are known as financiers.

For the friands I used a Waitrose recipe. I scaled down the quantities to four egg whites and added the zest of half an orange along with two tablespoons of poppy seeds. The friands are light and slightly crunchy due to the poppy seeds and are delicious little cakes. And a great way to use up egg whites too.

For the nonnettes I mostly followed Phil’s recipe. But I did, of course make a few changes. I substituted some of the honey for agave nectar as I didn’t have quite enough honey. But I’ve only used honey for the recipe below. I also added more rye flour and less white chocolate as I was worried about the nonnettes being too sweet.

Although the friands were good, the nonnettes were my favourite. They are truly delicious and I’m not usually a fan of marmalade in cakes. But the bitterness of the marmalade contrasted really nicely with the sweetness of the cake. And the rye gives a satisfying smoothness to the texture. The lumps of white chocolate are an added bonus.

Thank you Phil. I shall ever be grateful to you for this recipe.

For more eggless cakes take a look at the best egg-free cakes recipes.

Thanks for visiting Tin and Thyme. If you make these white chocolate nonnettes, I’d love to hear about it in the comments below. Do share photos on social media too and use the hashtag #tinandthyme, so I can spot them.