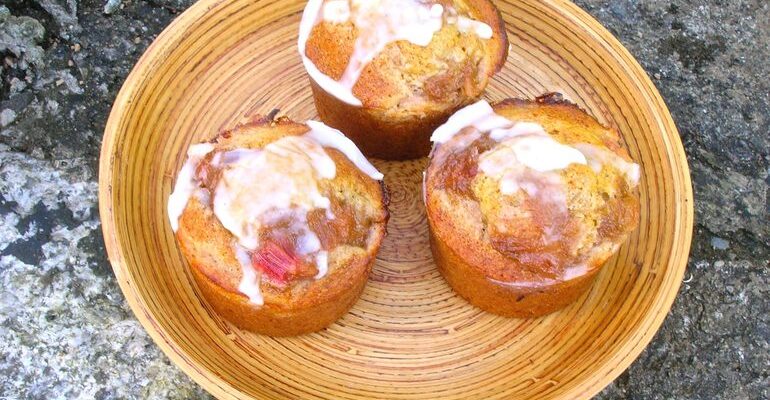 When I found that rhubarb had been picked for the One Ingredient blogging event in April, I so wanted to take part. But our rhubarb was ailing and I just can’t bring myself to buy something that we used to produce in prodigious quantities on our old allotment plot.

The other day, however, my mother, called in with stack of rhubarb from her garden. Luckily we had given her some of the plants from our old plot. Hooray, the one ingredient challenge might be over, but I could bake with rhubarb.

Since I saw the rose and rhubarb combination over at Laura of How to Cook Good Food, I’ve been itching to try it. My only dilemma was in what form?

Actually, the dilemma was easily solved. Turned out my one remaining duck egg supplier was attending a wedding this week and I had run out of eggs. I needed an egg-free bake. Bingo! Nonnettes it had to be. Not exactly a hardship in my experience. Since I first tried nonnettes back in December, I’ve become enraptured with these very tasty honey cakes.

Nonnettes are individual egg-free cakes originally made by French nuns in Dijon. The name, in fact, means “little nuns”.

What with friands as well as madeleines, the French are little cake bakers par excellence.

This is a really easy way to make a quick rhubarb jam. It won’t keep for ever as normal jam would, but it will keep for a month in the fridge if you keep it well sealed. All you need to do is place the rhubarb, sugar and rose water or rose syrup into an oven proof dish and roast in the oven for thirty minutes.

Spoon into a sterilised jar and seal. Here’s a useful link if you need a reminder on how to sterilise glass jars.

Roasting really brings out the flavour of the rhubarb. It also tends to come out a nicer colour too. The jam will thicken as it cools. You can use it in these nonnettes, spoon it onto puddings such as semolina, spread it on toast or indulge with some scones and cream.

I was quite excited at coming up with a nonnette nouvelle. The combination of rose and roasted rhubarb jam has probably never been used before. This in conjunction with some delicious Cornish honey, ought to be irresistible, I thought. As we still had quite a bit of cake in the house from my recent Clandestine Cake Club event, I used half the normal quantities to make six rather than twelve individual cakes.

These rhubarb honey cakes turned out even better than I could have wished. After the first bite, I was very much regretting that I only made six. They were absolutely scrummy and as CT stated later, tasted French. I think this was a compliment.

They have a lovely soft texture which I attribute to the presence of rye flour. The rose makes its presence felt but isn’t in the least overpowering. And it contasts well with the distinctive tartness of the rhubarb. The roasted rhubarb jam was a delight in itself and has adorned various slices of toast all this week.

Thanks for visiting Tin and Thyme. If you make these rose flavoured rhubarb honey cakes, I’d love to hear about it in the comments below. Do share photos on social media too and use the hashtag #tinandthyme, so I can spot them.

When I made these egg-free rhubarb nonnettes, I had not one, not two, not three, but four blog challenges in mind. Here they are:

Simple and in Season – a monthly challenge to get us to cook uncomplicated food using seasonal ingredients by Ren of Fabulicious Food. This month it is being guest hosted by Urvashi of The Botanical Baker. Rhubarb is in season right now, so these rhubarb and rose honey cakes fit in nicely.

Alpha Bakes – Caroline Makes and Ros of The more than occasional baker take it in turns to pick a random letter from the alphabet which inspires the theme of the bake. This month Caroline picked H and my H is for Honey Cakes.

Tea Time Treats – the fabulously sugar overloaded monthly tea time party run alternately by Karen of Lavender and Lovage and Kate of What Kate Baked. The theme this month is floral. Rose is my flower of choice. This is because I love roses as mentioned in previous posts and one of the reasons why I chose rose as one of the We Should Cocoa challenges.