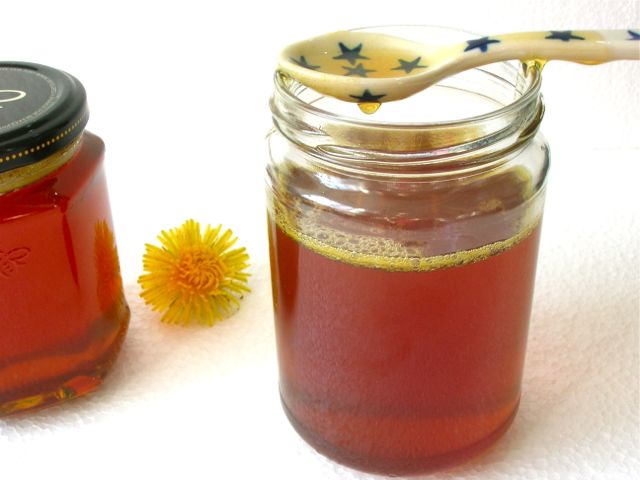 I remember reading about dandelion honey a couple of years ago on a blog, but couldn’t remember which one. I saw it again last year on someone else’s blog but again couldn’t remember where. After enquiring via Twitter, I found out one of the blogs I’d seen it on was Elizabeth’s Kitchen Diary, but by then it was too late and I’d already cobbled together a recipe from several I found online.

This mixture of dandelions, sugar and lemon juice is purportedly meant to taste like honey. Well that was a claim that had to be tried to be believed.

Our plot was covered in a riot of glorious yellow dandelions. They were clean, organic and I didn’t want them to seed all over the vegetable beds. I love getting these unintended additional crops from the plot. We’ve had quite a few nettles and wild garlic so far this year, but that’s as far as our foraging has gone.

When you gather dandelion flowers for this dandelion honey, make sure you pick them from a clean and unpolluted place. You don’t want to wash them before cooking or you’ll wash off most of that glorious yellow pollen. Also make sure you’re picking fresh dandelion flowers. They should be open and bright yellow.

When you’ve picked them, allow them to sit somewhere so that any insects you might also have picked can get away. Fifteen minutes should be enough time

All of the instructions I saw said to pick out the dandelion petals and use these on their own or the green bits would turn the colour a rather mushy brown and make the dandelion honey taste bitter. There was no way I was going to spend hours doing that, so I used the whole flower head and hoped for the best.

Do make sure you store the dandelion honey in sterilised glass jars. Seal well and it will then keep in the fridge for at least a year.

Astonishingly, it worked. The result was a wonderful dandelion honey that not only had the consistency of runny honey, but really tasted like it too. Despite leaving the green bits on, the bitter notes were faint and the colour was still golden rather than muddy.

I’ve used it in several recipes already including this Figgy Bread. It’s also gone into this caramelised pear and honey carob cake and my £1 chocolate banana cake. It works a treat in my easy vegan honey almond granola too. Now I know how simple it is, I shall be making this again next year.

Thanks for visiting Tin and Thyme. If you make this dandelion vegan honey recipe, I’d love to hear about it in the comments below. And do please rate it. Have you any top tips? Do share a photo on your favoured social media site too and use the hashtag #tinandthyme, so I can spot it.

If you’d like to see some more preserve recipes, follow the link and you’ll find I have quite a lot of them. All delicious, of course.

This is a poor man’s honey made from dandelion flowers and sugar rather than made by bees, but although it may not be true honey, it really does look and more importantly, taste like honey. It’s vegan too.
Prep Time15 mins
Cook Time1 hr 5 mins
Total Time1 hr 20 mins
Course: Jams, Chutneys etc
Cuisine: British
Keyword: dandelions, honey, vegan
Servings: 2 medium sized jars
Calories: 1493kcal
Author: Choclette @ Tin and Thyme

Ideally, all green parts of the dandelion flower would be removed to avoid bitterness. I have never done that as it’s just too time consuming and I’m happy with the result.Requires foraging for dandelions and overnight soaking.Makes 2 jars.If well sealed, will keep in the fridge for at least a year.Please note: calories and other nutritional information are per serving. They’re approximate and will depend on serving size and exact ingredients used.

Dandelion is a wonderful herb. I often dig up the roots to make dandelion coffee. The leaves of the wild dandelion, I find too bitter, but some are happy to use them as salad leaves. There are myriad health benefits, but it is best known as a cleansing spring tonic. I am submitting my dandelion honey to Karen’s Herbs on Saturday over at Lavender and Lovage. It’s hosted this month by Anneli at Delicieux.

As this dandelion nectar is not only made from scratch, but is also picked from scratch, I am submitting it to Javelin Warrior’s Made with Love Mondays.

Dandelions are in full season this month, so I’m entering this vegan honey into Simple and in Season with Ren Behan.

Previous Post: « Mooving up the Professional Ladder and a Giveaway #29
Next Post: Muscovado Banana Bread with Raisins or Chocolate »