Welcome to In My Kitchen Two. Enjoy a quick peek at some of the items that have passed through my kitchen during the last few months and beyond. 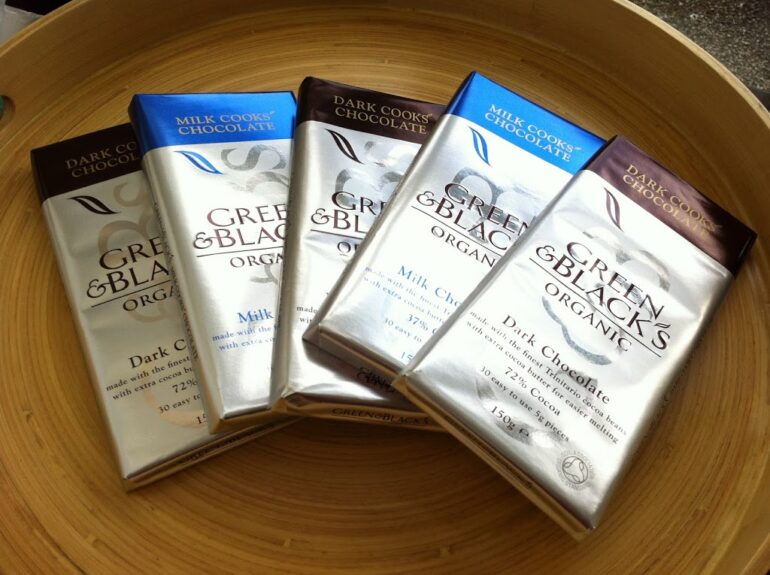 Following Christmas, I have some lovely new things in my Kitchen, so it seems like a good time to join Celia of Fig Jam & Lime Cordial for one of her famous In My Kitchen posts.

In My Kitchen Two

In My Kitchen I have some cook’s chocolate. They were an early Christmas present from Green & Black’s. Some I’ve already used in my glitzy mendiants but most are waiting patiently for their moment of glory.

Really love this red Emile Henry clafoutis dish. It was a present from my mother for Christmas. Soon to be filled with sumptuous chocolate swirled clafoutis.

In My Kitchen is a Japanese ginger / wasabi grater which doubles as a fish sculpture. It’s even got scales. A Christmas gift from a friend.

In My Kitchen are four redoubtable rocoto chillies. I recently incorporated the fifth one into some chocolate ice cream. They were harvested long after the main crop, which I used to make our chilli sauce. There are still some of their brethren ripening in a cold greenhouse. In January? Yes, January.

In My Kitchen is a copy of Tea with Bea. It’s a thank you gift for baking cakes at a Winter Solstice party. As it happens, I didn’t actually bake for it as the party was cancelled due to the excessive rain and mud we experienced just before Christmas. But I received the book anyway.

I had the pleasure of choosing two tea towels recently from All Tea Towels. Whether you’re after a particular theme or colour, chances are you’ll be in luck. There’s even a food and drink category, although sadly, I couldn’t find any chocolate related ones.

I did find plenty of red tea towels though. Red is my colour of choice for all kitchen related paraphernalia. Making a choice of only two was actually quite difficult. Colour and design were two factors to be considered. Material was another – linen, plain cotton or waffle?

In the end I chose two Irish linen tea towels, partly because I liked the designs and partly because they were linen. Linen is purported to be the best material for tea towels as it is absorbent, lint free and durable. It also has a touch of elegance and class about it, which my kitchen is very much in need of.

I chose an anemone design for myself. It’s a Pierre-Joseph Redoute print. Anemones are some of my favourite flowers and as well as featuring a large red anemone, there is a thick red border too.

The second one is a Madeleine Floyd design featuring garden birds, their song and their eggs; this one is destined for my mother. She loves to watch the birds in her garden and try and identify their calls and it has a blue border which matches her aga.

Linen has a long and venerable history. Made from the flax plant, Linum usitatissimum, it’s thought to be one of the first plants used to make fabric in about 8000BC. It was brought to prominence by the ancient Egyptians in about 4000 BC.

Although linen had been grown in Ireland from around 1000BC, it did not become widely used until the Middle Ages. Although cotton and in more recent times, artificial fibres have come to dominate the market, there is still, thankfully, a place for the production and use of linen in our modern world.

In My Kitchen are two packs of new-to-me superfoods. They’re a present from CT. Chia seeds are a Mexican superfood that’s taking the vegan world by storm. Having said that, most of it is grown in Australia these days.

Sometimes known as Puruvian gingseng, maca also packs a powerful punch. How I’m going to use it, I have no idea.

A few weeks ago, the New Zealand Honey Co had sent me a 340g bottle of their 10+ pre-biotic Beech Forest Honeydew to try. It’s quite a dark honey that is gathered by the bees from honeydew rather than flower nectar. They claim it’s particularly good for the immune system and digestion. This may or may not be true, but I have to say it’s totally delicious.

It has a deep rich and not too sweet flavour and has more body than many other honeys I’ve tried, leaving a nice flowery aftertaste. It warms the back of the throat in a healing sort of way. What I’m trying to say is, it feels like it’s doing you good.

I have used it now in a number of recipes but also on toast for breakfast. It work particularly well in these cinnamon Christmas star biscuits, giving them a special richness. This is also my first experience of honey contained in a squeezy bottle and it certainly helps to deliver it to the right spot without the usual mess and wastage. Not that I object to licking the spoon, or my fingers come to that.

In My Kitchen are two pots of gold glitter. What a delightful and kind gift from Susan of A Little Bit of Heaven on a Plate.

In My Kitchen – a weighty tome – Pierre Herme’s chocolate book, a Christmas gift from CT.

Lady luck has been on my side in the past few months as evinced by the following wins:

Now who would have thought the perfect chocolate macarons would ever feature on my blog? Not me for sure, Gallic sophistication is hardly my style. I can and have made some very tasty chocolate macaroons, but not something that looks as elegant and polished as these French macarons.

Chocolate Macarons, but not as we know them, Jim!

I knew I couldn’t fool you for long. I must have done something right recently as I have just won these chocolate macaron earrings from Jill of Mad About Macarons. From across the Channel, these have travelled all the way from that well known capital of haute cuisine, Paris. They arrived beautifully packaged and were well protected, wrapped in the pretty floral cloth shown above.

Crafted by Patricia Bourdell of the French Bakery, these charming earrings are not only fantastic replicas of chocolate macarons, but are also made with 14 carat gold. The French Bakery specialises in necklaces, earrings, rings and other jewellery inspired by French bakes.

In My Kitchen – a win from Angela of This Is Life – Ten Byron Bay Cookies, the ones I like!

Hamper Tower packed with preserves from Homemade by Fleur. I adore the boxes which I can stuff with goodies and gift to friends and family.

Love this Russell Hobs food processor and blender from Fabulicious Food. It’s red too, so a perfect fit for my kitchen.