Orange flavoured sponge cakes with a note of cardamom, dyed pink with beetroot water and a surprise blob of plum jam in the middle. They’re topped with a creamy white chocolate and shocking pink beetroot icing. I’ve called them beetroot and orange cupcakes, not so much for the flavour, but for the colour. 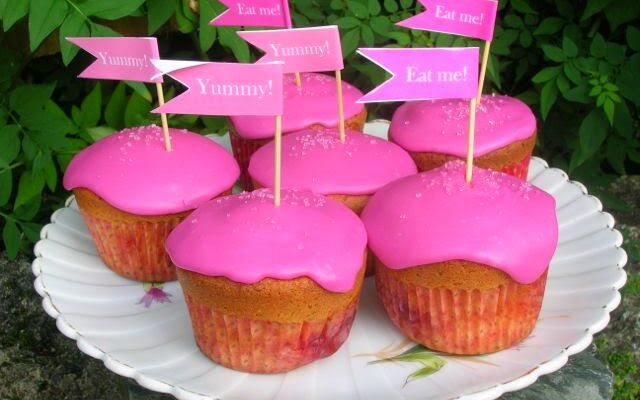 It’s the last day of National Cupcake Week and I’m just getting in by the skin of my chinny chin chin. With the Great British Bake Off in full swing everyone seems to have gone baking mad. Home Bargains is one such and they have given me a helping hand with my cupcakes by sending a box full of baking goodies. The brief was to create a Home Bargains showstopper.

The Home Bargains kit included a tin of pink cupcake paraphernalia. What could I do but go totally pink for the occasion? I’d recently made a few jars of plum jam that was not only very tasty with a sharp tang to it, but was a rather beautiful shade of pink. I’ve been wanting to attempt cupcakes with a blob of surprise jam in the middle for a long time and it couldn’t wait any longer.

After my blackberry and white chocolate melt experience, I was a little concerned that the jam would either sink to the bottom of the cakes or spurt out all over the place. So I went for a thicker batter than I would normally do, in the hope it would hold the jam. The mixing bowl provided was perfect for the job, large enough to mix easily whilst being light and sturdy at the same time. I decided to flavour the batter with orange and use beetroot to colour the cake. Before it was cooked, the batter was a lovely shade of pink, but on baking it sadly resumed a more normal hue.

I’d intended the icing to be a white chocolate one with a swirl of pink plum jam running through it and I was going to use the piping nozzles and bags included in the kit to apply it. However, time began to run out, so the cakes morphed along the way. I ended up omitting the jam and using beetroot juice instead; I then just applied the icing with a palette knife. To finish, I applied a few of the pink sprinkles provided in the kit. To good effect I thought.

Annoyingly, I couldn’t assemble the accompanying pink presentation box. I made several attempts then realised it was a two person job and CT wasn’t around. The cakes were presented on a plate instead. I was rather taken with the “eat me” flags that came as part of the kit and the colour alone makes these a Showstopper to remember.

The cakes were destined for friends with whom we were dining that night and I was hoping the shocking pink wouldn’t offend them. As it happened they had made a pink summer pudding for dessert, so the cakes fitted in rather well.

In fact my beetroot and orange cupcakes received lots of appreciative comments. And thankfully the jam stayed in the middle – for most of them at least. Little Jack Horner could have stuck in his thumb and pulled out a plum, if he’d so wished. CT is no fan of beetroot, so expressed his relief when he couldn’t detect the taste. It’s true, it was the colour of the beetroot rather than the flavour that emerged.

When I say beetroot water in the recipe, I mean the water left over from simmering beetroot in a pan. If you only use a little water to cook your beetroot, you’ll get a good strong colour. This is a great way of using up something that might otherwise be thrown away.

I’d also like to point out it’s #OrganicSeptember and everything here bar the eggs, sugar and icing sugar is organic, including our homegrown beetroot.

Oh and here’s the plum jam I made from some rather tart plums, courtesy of my mother’s garden. It’s totally scrumptious.

For even more cakes made with vegetables, hop over to my Sweet Vegetable Bakes Pinterest board.

Thanks for visiting Tin and Thyme. If you make these beetroot and orange cupcakes, I’d love to hear about it in the comments below. Do share photos on social media too and use the hashtag #tinandthyme, so I can spot them.

Beetroot and Orange Cupcakes. PIN IT.

Beetroot and Orange Cupcakes with a Jammy Surprise – The Recipe

The beetroot is more for colour than flavour.This is a great way of using up cooking water that you might otherwise throw away.If you boil your beetroot in only a little water, you'll get a good strong colour.
Tried this recipe?Please take a photo and mention @choclette8 or tag #tinandthyme on Instagram, Twitter or Facebook.

The theme for this month’s Love Cakes with Ness over at JibberJabberUK is Back to School – Something New. Well I can honestly say I’ve never put beetroot in icing before and nor have I tried to bake jam into the middle of cupcakes either.

Thanks to Peppermint Soda for my Home Bargains Showstopper kit, I was not required to write a positive review and as always all opinions are my own.