A sticky chewy little cake made with breadcrumbs and almonds. It comes from Finland and is easy to make. These Marmalade runeberg cakes are astonishingly light and very moreish. 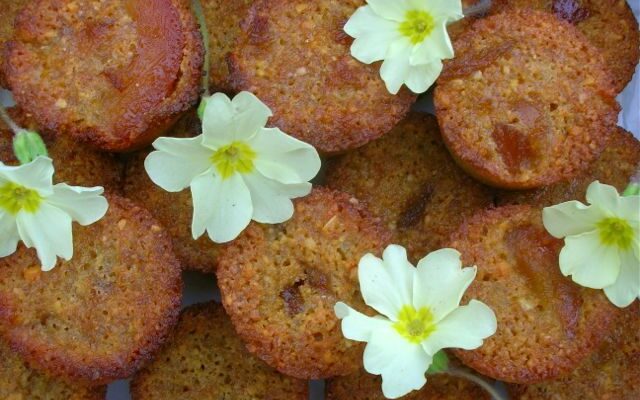 Tada! For my first recipe published on Tin and Thyme, I bring you some non chocolate baking. Runeberg cakes (Runebergin Tortut) are a Finnish celebratory cake that was supposedly invented by the wife of poet Johan Ludvig Runeberg for him to enjoy every morning for breakfast. How kind of Fredrika.

They’re made with an unusual mixture of breadcrumbs and ground almonds instead of flour. It’s a great way to use slightly stale bread. I tried something similar earlier in the year with this rye bread and blackcurrant cake and the results were truly impressive.

When I was browsing through my borrowed copy of Scandinavian Baking by Trine Hahnemann, I noted her recipe for Runeberg cakes and thought they would make an ideal offering for Mother’s Day. My mother is game for anything and likes her cakes to have interest and texture.

For the first time ever this year, she made Seville orange sauce instead of marmalade which she was rather upset about. I am the lucky recipient of a couple of jars of this orange sauce. Well what better way to use it than on these cakes. I thought the sweet and bitter flavour of the marmalade would enhance them. How right I was.

The original recipe, tops the cakes with a spoonful of raspberry jam. I, by contrast, poured some marmalade sauce over the tops prior to baking. I also used freshly ground almonds as they give a better flavour. They also give a more interesting texture. As I made 36 mouth sized morsels, there were plenty for us as well as my mother.

The result exceeded all expectations. Crispy outsides make for a nice contrast with the soft and chewy interior. The freshly ground almonds, with their irregular texture gives them real character and lightness too. They had just enough marmalade to make them interesting but not enough to be overwhelming. CT doesn’t like marmalade, but he really liked these Runeberg Cakes. He reckoned they would have inspired Johan’s muse.

For another take on Runeberg Cakes hop over to Vagabond Baker.

Thanks for visiting Tin and Thyme. If you make this recipe for marmalade Runeberg cakes, I’d love to hear about it in the comments below. Do share photos on social media too and use the hashtag #tinandthyme, so I can spot them.

If you’d like more little cake recipes, follow the link and you’ll find I have quite a lot of them. All delicious, of course.

Traditionally these are not made with marmalade, but are topped with a spoonful of raspberry jam when the cakes are cool. This version makes for marvellously sticky cakes.Adapted from Scandinavian Baking by Trine HahnemannPlease note: calories and other nutritional information are per serving. They’re approximate and will depend on exact ingredients used.

I’m sending these marmalade runeberg cakes off to Jac at Tinned Tomatoes for Bookmarked Recipes.

These are also going off to Treat Petite with CakeyBoi and the Baking Explorer as the theme this month is Mum.