When I sounded the call for cinnamon in this month’s We Should Cocoa Christmas special, 32 bold bakers rallied to the cry. Unsurprisingly Christmas baking took centre stage. I just love, love, love the wonderful assortment of festive cakes, tarts, desserts, chocolates, muffins and so many delightful biscuits that have been inspired by that most excellent of spices, cinnamon. Sp please read on to find 32 fabulous chocolate and cinnamon recipes. 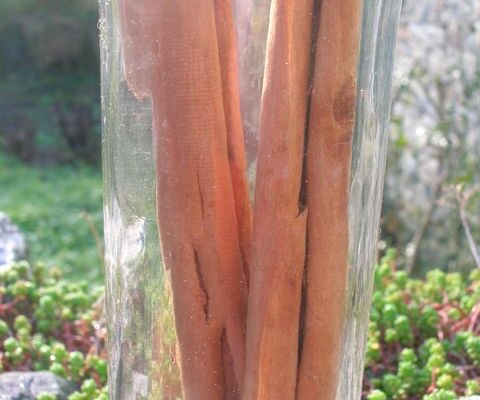 December the first was the first day of winter, according to the Meteorological Office. So what could be better than something spicy and comforting to warm up the cockles of our hearts? Originating in Sri Lanka, cinnamon comes from the inner bark of a tropical asian tree Cinnamomum zeylanicum. It was highly prized by ancient cultures and was more treasured than gold, a gift fit for Kings and gods. It is thus not surprising that in Europe, it is heavily associated with Christmas and used to mull wine and cider, as well as in biscuits, cakes and puddings. It came to Britain via Arab spice traders in the early 15th century.

It’s a particularly good spice to be using at this time of year as it is said to help ward of colds and flu as well as alleviate some of their symptoms. It’s purported to have a number of other benefits too, including boosting memory capability. I obviously don’t eat enough of it or have I said that already?

Cinnamon is one of my favourite spices, with its warm and sweet aromatic character that goes with so many different things. I use it in curries, on my porridge, sprinkled over hot chocolate and of course in baking. I recently posted these chocolate and cinnamon rolls which were super delicious but another cinnamon bake that stands out in my memory as being particularly good was this cinnamon chocolate chip cake. I’m so glad you joined me in cooking up a storm of delicious chocolate and cinnamon delights during this merry month of December.

I’d like to take this opportunity to say thank you to all those that have supported We Should Cocoa in 2012, either by hosting, entering or commenting. Without you all, this challenge would not exist.

32 Chocolate and Cinnamon Recipes for Christmas

New to We Should Cocoa, Karin from Sinnesfreuden kicked things off this month with her spicy Christmas drinking chocolate popsicles. These are such a great idea and are perfect for Christmas gifts. Each year I plan make some, but I haven’t managed it yet.

Janice of Farmersgirl Kitchen made some choc-ful Christmas muffins which, of course, included cinnamon. In making them she got to use her super new red mixing bowl, Christmas platter and muffin carrying case. Lucky thing.

How much wouldn’t I have given to get a bag of these chocolate covered mulled wine marshmallows for Christmas. These have got to be pure heaven in my book and are made by Becky of Mintcustard in an attempt to cheer herself up after being rather horribly ill.

One of my favourite things to drink as a special winter treat is hot chocolate flavoured with cinnamon, so I was really pleased to see this entry for Cinnamon Hot Chocolate from Elizabeth of The Law Student’s Cookbook. This one has vanilla as an addition which I’m now keen to try.

I haven’t yet seen a copy, but all the reports of Jerusalem by Yotam Ottolenghi and Sami Tamimi have been positively glowing. These gorgeous sounding warming spice cookies made by Jill of Tales of Pigling Bland have only added to my desire to obtain a copy. Though I think her addition of cherry brandy and chilli chocolate can only have improved them.

Layers of chocolate cream and cinnamon have got to be one of the best things ever. This frozen chocolate cinnamon parfait by the Nutty Tart is a brilliant idea for a make-ahead dinner party dessert. It incorporates a rather clever method of pasteurising the egg yolks that I’ve not come across before.

This round-up just gets better and better. Corina of Searching for Spice has made a dessert which I will most certainly be making in the summer when the raspberry season is in full swing. This white chocolate and raspberry tart cleverly makes use of a cinnamon crust.

Now for the brilliantly named Christmas Mazurka, just the thought of it makes me want to get up and dance. Quite why it has this name remains a mystery, but what a brilliant bake for Christmas. Thanks to Lucy of The KitchenMaid for another excellent recipe.

My own contribution of cinnamon stars were a great success and I think I shall be making these for years to come.

Cinnamon and ginger make for a good combination and when combined with chocolate they jump up to another level entirely – well it works for me anyway. Susie of Fold in the Flour was a little disappointed with these chocolate glazed  gingercakes, but I would be delighted to indulge in one.

Dom’s balls, much like his thighs, have become a thing of legend at Belleau Kitchen. This year he dipped them in chocolate for that extra special touch. Although I didn’t do the chocolate bit, I did make some of these chocolate dipped cinnamon balls for Christmas gifts this year and can confirm they are delicious.

Cinnamon and chocolate came as a bit of a surprise to Janine of Cake of the Week who hadn’t come across this combination before. I think she was convinced after making these delightful star shaped cinnamon biscuits sandwiched with a chocolate water ganache, so not nearly as fatty a biscuit as you might imagine.

Hooray for Caroline Makes who made these divine chocolate cinnamon rolls – it’s good to have some yeast bakery included. I know these are divine because I made some myself a while back.

More balls from Rita Cooks Italian, quite different to Dom’s but equally good looking. These cinnamon and ginger chocolate balls are made with dates and mixed nuts and sound delicious.

Time for some more muffins now from Snowy of Cookbooks Galore. These cinnamon, coffee and chocolate muffins have a wonderful secret chocolate centre.

I was a little bit shocked to read that Claire of Under the Blue Gum Tree heaves at the very thought of cinnamon. However, she wasn’t going to let this put her off entering this month (brave girl) and I’m so glad she didn’t, because this West Indies chocolate tart from Eric Lanlard’s Tart it Up looks and sounds an absolute delight.

I’ve been meaning to try my hand at German honey biscuits for an age, but it’s one of the many recipes that continues to elude me. Carina of Nutritious Deliciousness has come to my rescue though with these fabulous looking chocolate covered lebkuchen.

I am so very excited by this entry from Laura of How to Cook Good Food. I just love gingerbread houses and all the remembered fairy tales of childhood that go with them, but I can’t imagine ever having the patience to make one myself. I just adore this gingerbread house for Christmas complete with gingerbread men to live inside it.

Those cookies just keep coming and bring them on I say. These festive spiced cranberry and chocolate chip cookies look utterly scrummy which is no surprise as they come from Michelle of Utterly Scrummy Food for Families.

How about this spectacular tower of Dutch pancakes filled with speculoos spread and mascarpone? Well, I for one would be very happy to try a slice. Kavey of Kavey Eats thought this quick and easy speculoos & mascarpone pancake cake was just what was needed in the run up to Christmas when we are all short of time and I think I’m inclined to agree.

Bundt cakes are another bake I have yet to try. I’ve been looking for a silicone ring mould for a couple of years now, but no success so far. This chocolate and cinnamon bejeweled Christmas bundt cake is a particularly fine specimen and comes from the highly creative Homemade by Fleur.

These Nutella-filled cinnamon sugar muffins had me drooling at the very thought. I have a weakness for cinnamon doughnuts and these muffins made by Natalie of HungryHinny sound even more appealing – they look pretty fabulous too.

I made chocolate crackles for the first time this year as Christmas gifts but am now regretting not having seen Suelle’s version first. You’ll find these very tasty chocolate-cinnamon crackle tops over at Mainly Baking where you might just end up staying a few hours as there are so many excellent bakes to peruse there.

Another hot chocolate, decadently made with double cream this time. This cinnamon cocoa was enjoyed by the lovely Hannah of Corner Cottage Bakery in the quiet of Christmas Eve.

And the final entry, which will round off the feast nicely, come wrapped in fine looking Christmas tree cases. Christmas chai inspired cupcakes with chocolate buttercream from Caroline of Cake Crumbs and Cooking.

Maybe that wasn’t the final entry after all. Another impressive Christmas day entry comes from Sarah of Maison Cupcake with her Christmas Buche de Noel. Cinnamon extract is the secret ingredient here, not something I’ve come across before so I am duly intrigued.

Chestnut puree baked into a savoury loaf of bread sounds like heaven to me but with added cocoa, cinnamon and chilli too, I just can’t see how it could get any better. Jen from Blue Kitchen Bakes brings us this chocolate and chestnut spiced loaf.

And some more Christmas goodies have emerged from the ether. Karen of Lavender and Lovage got into the festive spirit communed with her inner child. She made these delightful and colourful little spiced chocolate Christmas tree cakes.

Kit of I-Lost in Austen always wows me with her stunning creations and even more stunning photography. These cinnamon, oat and chocolate chip pancakes have me wanting to invite myself along for breakfast.