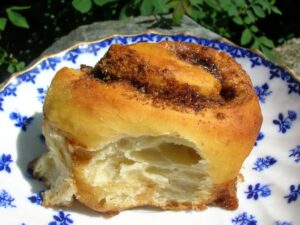 When I first got my hands on Green & Black’s second chocolate book Ultimate, there was one recipe in particular that leapt out of the page at me. It called to me, oh so seductively and it came to the inevitable point that I could resist no longer. When Nazima of Franglais Kitchen, who is hosting this month’s We Should Cocoa, decided bread was to be this month’s theme, I was reminded that I had never actually got around to posting about Arianna’s amazing chocolate cinnamon rolls.

Arianna was taught to make these rolls by her Norwegian mother. She is a pastry chef now baking cakes at her own bakery in London: Bittersweet Bakers. I’m sure my rolls look paltry in comparison, but my goodness, they were good to eat.

The more things I try and juggle, the more my poor brain loses capacity and I can no longer remember if I followed this recipe exactly or not. Suffice it to say that there was a lot of sugar, cinnamon and 70% chocolate involved. Unusually, fragrant vanilla seeds were scraped into the yeasted dough which itself was enriched with egg, butter and milk. In addition to the sugary cinnamon and chocolate filling, the rolls were also cooked in a decadent cinnamon sauce. I made 20 rolls rather than the 16 specified and they were plenty big enough. I don’t feel comfortable just copying the recipe when I am unable to put my own spin on things, so you will have to go directly to the book. I’ve checked the G&B website for an online recipe, but had no success in finding one. You should be able to borrow a copy of the book from your local library if you don’t have one of your own. I do try and write up what I have done soon after doing it to avoid memory loss, but sometimes I don’t quite manage it. What I do remember, however, is just how good those rolls tasted.

These would make for a very special breakfast and would also be suitable for Breakfast Club, the theme of which is chocolate this month.

I’m submitting this to Bookmarked Recipes with Jac of Tinned Tomatoes as it had been bookmarked for quite a long time before I ever got around to making it.

I’m also entering this into Calendar Cakes as the theme is Bread, Rolls and Buns this month. CC is hosted alternately by Laura Loves Cakes and Dolly Bakes.