This cinnamon coconut chocolate crunch traybake is a real crowd pleaser. It’s ideal for parties where both children and adults will love it. It has less sugar than similar bakes, but its nutty crunchiness will have you coming back for more. It’s quick and easy to make; the hardest part is waiting for the chocolate crunch to cool and set. 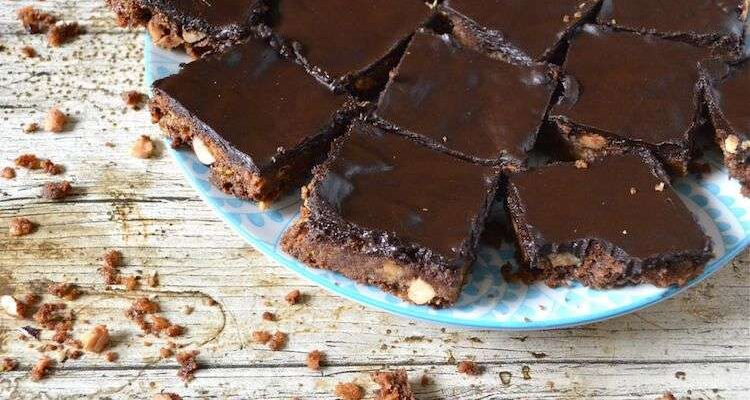 I’m in the process of moving house which inevitably means I’m having to sort through the fifteen years’ worth of stuff I’ve accumulated since living in one place. This is a mixed blessing.

On the downside it takes time and all of the decisions that need to be made are exhausting. On the upside however, it feels good to clear up and clear out. It also means I’ve been rediscovering bits and pieces I’d completely forgotten about and lots of memories have resurfaced.

One such item was the cookbook Ann Carr’s Recipe Collection. It was a gift from Kath at The Ordinary Cook several years ago and had been sitting under a dusty pile of books, lost and forgotten. As soon as I opened it, I saw several recipes I was keen to make. My eyes quickly fell on Mayoress Cakes.

Well there’s no story attached to know how this crunchy traybake got its name, but as soon as I saw the ingredients I knew it would be good. Because I’ve made something very similar a few years ago: these chocolate and coconut bars and they proved to be very popular.

As usual, I ended up doing my own thing and used the recipe as a rough guide only. I’m trying to use things up in my kitchen and not buy any more ingredients. This meant I added more than double the cornflakes, less than half of the coconut and a whole load of nuts that weren’t in the original recipe at all. I also added cinnamon, which I thought would give it extra pizzaz.

For the topping, I preferred the idea of a chocolate ganache type, rather than cocoa icing, so I made an indent into my chocolate stash too. Less stuff to lug in the removals van. As ever, I used less sugar than specified for both the chocolate crunch and the topping.

The result is a scrumptious and very moreish traybake with attitude. Scents of cinnamon and chocolate baking found their way into every corner of the house. The chocolate crunch is rather crumbly so take care when cutting it. I found a serrated knife works best. CT, on the other hand, found grabbing a large slice and diving in worked best for him. Each to their own.

And for all the traybake recipes with photos on Tin and Thyme, take a look at my traybakes category.

Thanks for visiting Tin and Thyme. If you make this cinnamon coconut chocolate crunch traybake, I’d love to hear about it in the comments below. And do please rate the recipe. Have you any top tips? Do share photos on social media too and use the hashtag #tinandthyme, so I can spot them.

If you’d like more cinnamon recipes, follow the link and you’ll find I have quite a lot of them. All delicious and nutritious, of course.

Chocolate Crunch – Get The Recipe

Will keep up to a week if kept in a cool place.Please note: calories and other nutritional information are per serving. They’re approximate and will depend on exact ingredients used.

This is my entry into this month’s We Should Cocoa. Do join in if you’ve made anything which features chocolate as a major ingredient.

I’m also sending my chocolate crunch to Treat Petite over at The Baking Explorer.

Likewise it goes to Bake of the Week with Mummy Mishaps and Casa Costello.