Anyone fancy a cocktail? Well we can’t give you cocktails, but we can give you these 21 cocktail inspired chocolate recipes. From painkiller cupcakes to mojito macarons to cosmopolitan truffles, you’re bound to find something to tempt you.

We Should Cocoa Turns Two

Hooray, We Should Cocoa is two this month. When Chele of the Chocolate Teapot and I started this challenge, I don’t think we had any idea it would be as successful as it has turned out to be. Time has flown by so fast, it hardly seems possible. When I look back at all of the challenges though, there are a phenomenal number of amazing entries. I’d like to say a big thank you to everyone who has participated over the years and to all those who have said such nice things about the challenge. It’s all very heart warming and gives me the will to go on.

I’d like to give special thanks to the #WeShouldCocoa stalwarts who contribute on a regular basis, in particular those who were there for the very first challenge:

While I’m in grateful mood, I’d also like to express my gratitude to those that have guest hosted some of the challenges and have done such a wonderful job of managing the event:

Having set the challenge as cocktails this month, I was at a bit of a loss. My inspiration was pretty much used up creating chocadoodledoo and rhubarbarella earlier in the summer. I know very little about cocktails really; Sloe Comfortable Screw is the only one I remember from the odd one that passed my lips back in my glory days as a student – not because of what was in it, but because of the rather shocking name. This challenge has made me feel like a student all over again; it’s been a journey of discovery and I now want to try all those cocktails and liqueurs I’ve never heard of before.

Thank you so much to those who helped celebrate this birthday month by coming up with these ingenious and beautiful to behold 21 cocktail inspired chocolate recipes. The usual burst of creativity has struck once again and we have a wide array of cocktail interpretations including cake, cupcakes, desserts, macarons, truffles, tarts and even cocktails. Pina colada, a well known cocktail combining rum, pineapple and coconut proved to be very popular – hmmm. I wonder how many nights have been spent propping up bars in tropical locations? But even with these, no two interpretations were the same.

Whilst everyone was giving themselves a headache wondering what on earth to do for this month’s challenge, I was on holiday. Yes, CT and I finally managed to go away for a whole week. We had a glorious time on the Scilly Isles and although we didn’t actually manage to find any cocktails, we did, in absentia, raise a glass to you all.

Natalie has kindly agreed to host next month’s We Should Cocoa, so do head over to the HungryHinny tomorrow to find out what she has in store for us in October. 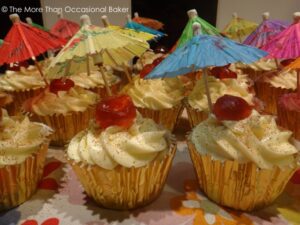 Painkiller cupcakes, don’t sound that much fun to me, but Ros of The More Than Occasional Baker thought these were just the thing to get the party started with a swing. When I found out they contained rum and pineapple and orange curd and coconut and white chocolate and then saw how luscious they looked, I was of course won right over and couldn’t care less what they were called.

Managing to wean herself off cocktails and onto beer as a student, Johanna of Green Gourmet Giraffe nevertheless consumed a goodly number. Pina colada was one of her favourites. Wanting to share the cake with her young daughter, she came up with this alcahol free pina colada cake. Johanna also used the cake as an opportunity to try out a new green icing pen to good effect.

Claire at Under the Blue Gum Tree was also drawn to a pina colada cake. The creativity of bloggers never fails to impress me. Two cakes inspired by the same cocktail, but both totally different. Claire’s most definitely contained alcohol and is quite a splendid affair. The white chocolate, cream cheese and yogurt icing sounds so very good and is something I am going to have to try very very soon.

Mistress of macarons and cocktail inspired bakes, Mel of Sharky Oven Gloves, came up with these spectacular green swirled mojito macarons. Because I’m just a little bit jealous of her skill and flair, I can’t help letting on that in her enthusiasm she forgot to add the lime to the mint and rum.

Maria from a Box of Stolen Socks decided she wanted the real deal and rather than making a cocktail inspired creation, she would make a cake inspired cocktail. Black Forest Gateau was transformed into a Black Forest Manhattan. Single malt whisky, cherry liqueur and chocolate of course combined to pack, what I imagine to be, a very powerful punch.

Rum, pineapple and coconut come together again in the form of pina colada cupcakes this time. Janice of Farmersgirl Kitchen used fresh pineapple for her share in these 21 cocktail inspired chocolate recipes. She also had a funky new pineapple gadget she wanted to try. To see how she got on, check out her post which features a video of her endeavours.

Oh goodie, another cocktail. This time raw chocolate and cocoa butter combines with Polish honey liqueur to form this rich but elegant looking raw chocolate cocktail. Ren of Fabulicious Food assures us that she is not in the habit of drinking during the day, but with a raw chocolate kit to test, what is a girl to do?

Janine of Cake of the Week has noticed a gap in the cocktail repertoire so has decided to fill it with a brand new one – a Chocolate Russian. Consisting of chocolate, vodka and coffee, Janine has translated the idea into these Chocolate Russian macarons.

Now, who other than Phil from As Strong As Soup, has a bottle of creme de pamplemousse sitting at home? I didn’t know there was such a thing, but it sounds right up my street. Based on one of his favourite tipples, Grapefruit Kir, Phil has created these inspirational pamplemousse financiers complete with caramalised grapefruit.

Laura of How to Cook Good Food has a secret side that was just waiting for this cocktail inspired challenge to reveal it. She is a Campari devotee. Her Campari and orange dazzle cake was inspired by the cocktail Campari Orange Passion, another one I have yet to be introduced to. If truth be told I’m not sure I’ve even tasted Campari. Anyway, Laura’s cake has dazzled me, I’m itching to try it.

My education into the world of cocktails took another leap with these Cosmopolitan truffles. Natalie of HungryHinny explains that the Cosmopolitan is a mix of vodka, orange liqueur, cranberry juice and a twist of lime. Her truffles echo these ingredients in a white chocolate ganache which is itself covered in white chocolate – pure indulgence.

Now margarita I have heard of – phew! Introduced to these whilst hanging out in Las Vegas (as you do), Jean of Baking in Franglais has been addicted ever since. She used her favourite tipple to make Nigella’s chocolate margarita cake using the margarita combination of tequila, triple sec and lime – my new found confidence immediately took a knock as I had to google triple sec. Jean was so impressed with the cake that it is now her favourite flourless chocolate torte.

It must be the sophistication of cocktails that has inspired so much elegance in this round-up. Hannah of Corner Cottage Bakery has brought along some more, with these French martini macarons. French martini is Hannah’s favourite cocktail and guess what? I had to google this one too. It’s a mix of vodka, raspberry liqueur, pineapple juice and lemon. In honour of WSC’s 2nd birthday, Hannah has produced perfect chocolate macarons filled with a chambord chocolate ganache (which she chose in recognition of its presence in the first ever WSC challenge) and topped with dried pineapple.

Kir comes to the fore again but this time with the very classy Kir Royale from Jill of Lapin d’Or and More. Jill has made the most beautifully rolled kir royale Swiss roll and filled her sponge with homemade blackcurrant jelly and a white chocolate champagne ganache.

We are all very lucky to see this stunner from Lisa of Parsley Sage & Sweet. Whilst putting the finishing touches to her chocolate champagne floats, the glass broke and she had to take the shots with the contents pouring out. Chocolate ice-cream, raspberry sorbet topped up with champagne has now been added to my “100 things to do before I die” list.

Having had all sorts of grand, if somewhat vague, plans for this event, I ended up running out of time. I wanted to use some mint schnapps I’d made so I came up with these chocolate mint rum cocktail cupcakes. This is, apparently, a real cocktail mix, but I couldn’t find a fancy name for it.

In celebration of her first Blogiversary and after a little, err, gentle persuasion on my part, Juliet of The Crazy Gypsy pulled together a very last minute but remarkable cocktail concoction. She gives us Tuesday Tumble – a mix of Agavero (another one I had to google), Amaretto and bourbon with the chocolate component cleverly attached to the rim of the glass. Thank you Juliet, a great way to celebrate two birthdays 🙂

For complete dedication to the cause, Caroline from Cake, Crumbs and Cooking is unlikely to be beaten. She’s been studying for exams all month so has had little time for baking. With only a few hours to go before the deadline she decided she wanted to be part of the We Should Cocoa birthday celebrations – she was one of the founding participants after all. So after six hours of exams and a one and a half hour commute home, these magnificent mojito cocktail cupcakes were envisioned, created, photographed and eaten. I hope these lime drizzle cupcakes with a mint and white chocolate icing helped alleviate some of the pain of a very stressful month.

Inspired by various whisky cocktails from a recent trip to Scotland, Eira of Cookbooks Galore created these chocolate and whisky tartlets. I was very pleased to see another take on the challenge and these tartlets layered with pastry, whisky chocolate and cream sound rather tempting.

And sipping her chocolate martini last thing on Sunday night comes Lucy of The Kitchenmaid. I really like this idea of Lucy’s: a combination of vodka and vanilla syrup poured over a square of chocolate. I’m left wondering just how luscious a square of vanilla vodka soaked chocolate is.

And sadly that’s the last of our 21 cocktail inspired chocolate recipes.