Chocolate babka? Need to know more? Think brioche style yeasted bread baked with layers of sticky sweet cinnamon scented chocolate. A bit like a cinnamon swirl bun, but the chocolate takes centre stage. It’s divine and much easier to make than you might think. It’s ideal for a special breakfast, brunch or afternoon tea. Then again, just enjoy a slice with a cup of coffee whenever it suits you. 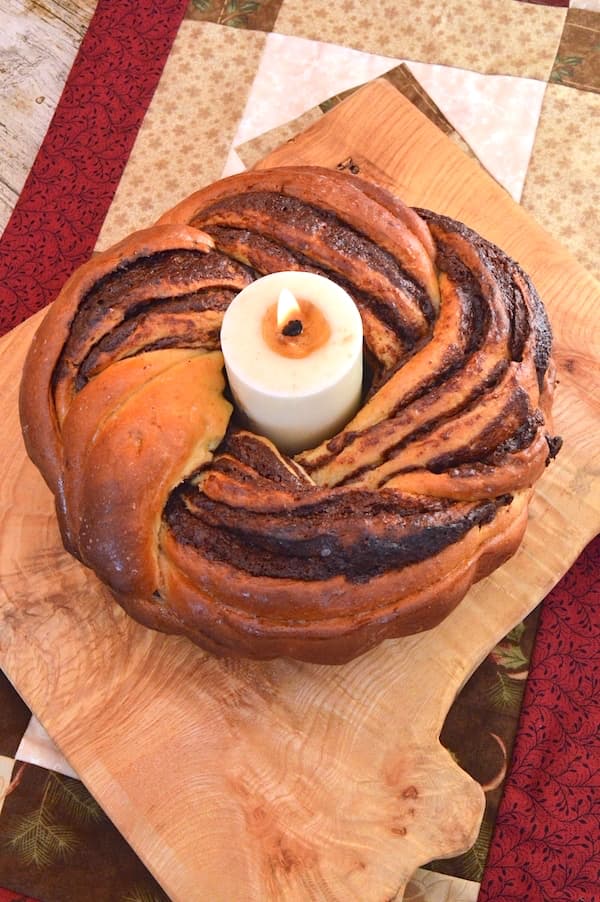 Chocolate babka has been on my to do list for a long time. But when it was featured as one of the technical challenges on The Great British Bake Off a few weeks ago, it suddenly bounced to the top. I’ve made it a few times now and let this be a warning to you. Once you’ve made one, you’ll want to make more. It’s so very tempting.

Babka is a sweet yeasted bread similar to brioche, but it’s rolled out with a filling spread over the top. It’s then formed into a roll, cut, plaited and baked. When you slice into the finished babka, you should see a beautiful marbled effect. The dough is enriched with eggs, butter and milk which helps to keep it light and soft as well as delicious. As a final flourish, the top is glazed with sugar syrup.

Babka is a speciality of Ashkenazi Jews, mainly from Poland and the Ukraine. When many of them emigrated to the USA and Israel in the last century, they took their babka with them and added chocolate to the original. Chocolate babka is now really big in the States. But in Israel, it’s known as krantz cake.

Traditional Polish babka is shaped in the form of a wreath. But it’s now more commonly baked in a loaf tin. I like the traditional ring shape, so I bake my chocolate babka in a bundt mould.

Chocolate babka is arguably the most popular variation these days. I can understand that, who doesn’t love chocolate? However, cinnamon, apple, poppy seeds, dried fruit, marzipan and cheese babkas are also common.

Don’t worry if you think chocolate babka is complicated to make. It really isn’t. If you can plait hair, you can plait a babka. I got the rolling, cutting and plaiting bit right first time, although I did tweak my original recipe a bit the second time I made it.

What am I doing using unbleached plain flour rather than wholemeal? I know! It’s very unlike me, but there are some bakes, like this chocolate babka or these Strasbourg kouglof, where wholemeal flour just doesn’t work.

Unusually for a yeast recipe, you don’t use strong flour as you do with normal bread. Why? Because the lower gluten content of ordinary plain flour creates a softer dough.

Before you start, ensure you’ve taken the butter out of the fridge. It won’t blend into the dough if it’s rock hard, so it needs to be soft (ish). Chop it into small pieces so it softens faster and is easier to add to the dough later on.

I’m suspicious of instant yeast; it somehow smacks of Chorleywood. I prefer to use fresh or ordinary dried yeast. This does mean there’s an extra step involved, but it’s really not that much additional work.

You’ll need to mix the sugar and yeast with tepid milk and leave it to activate for ten minutes or so. You’ll know when it’s ready as it will start bubbling. As soon as bubbles appear, you can add the flour, salt and eggs.

The dough is quite a soft one, so it’s best to use the dough hook of an electric hand held or stand mixer to knead the dough. As it’s kneading, add the knobs of softened butter, one by one. Knead at a low speed for about seven minutes. Cover and leave in a cool place for ten minutes or so to firm up.

Whilst you’re waiting for the yeast, milk and sugar to do their thing, get on with making the chocolate filling. It’s very easy, but it needs a bit of time to firm up and cool down so that you can spread it over the babka dough.

Melt the butter in a pan. Turn off the heat then add the chocolate. Leave for a couple of minutes to melt. Add the sugar, cinnamon and cocoa powder and stir until smooth.

By the time the dough is ready, the chocolate mixture should be ready. Be careful not to leave it to cool for too long, however; the filling needs to be soft enough to spread.

How to Shape Chocolate Babka

Gather the dough into a ball and place it on a large floured surface. Form it into a rectangle and roll out to roughly forty centimetres by thirty. Don’t worry if it’s not exact. Each babka is unique and the baking will sort out any seeming unevenness.

Spread the chocolate filling over the dough with a flat bladed knife, leaving a one centimetre gap around the edges.

Roll the dough up lengthways so that you end up with a snake like tube. Leave a couple of centimetres at one end in tact then slice the rest of the roll in half lengthways.

Plait the two strands together, starting at the joined end. Twist the strands as you go so that the chocolate layers are mixed up.

Pinch the ends together, then lay the plait into your bundt mould or loaf tin, doubling up as needed. If you’re using a silicone mould, it’s best to place it on a baking tray for stability.

How to Prove and Bake Chocolate Babka

You’ll need to give the chocolate babka dough about two hours to rise. It needs to double in size before going into the oven. Whilst it’s rising, cover it with a plastic bag or tea towel so that it doesn’t dry out.

When it’s ready to bake, pop it on the middle shelf of your preheated oven and it should be ready in thirty five minutes or so. If you’re baking it in a loaf tin, you may need a bit longer. You’ll know it’s ready, if it sounds hollow when you tap the base. Just turn it out of its mould or tin briefly to do this. If it doesn’t, return it to the tin and oven and bake for another five minutes or until it does sound hollow.

Try not to overtake the babka though, it would be a shame to end up with a horribly dry loaf.

Most recipes for chocolate babka have a phenomenal amount of sugar syrup poured over them. It all seems a bit excessive to me. So I don’t douse my chocolate babka with huge amounts of syrup and it’s still plenty sweet enough.

Prepare the syrup whilst the babka is baking and allow it to cool. Either pour the syrup over the babka as soon as it comes out of the oven, or use a brush to ensure as much is covered as possible.

Leave the babka in the mould for ten minutes so it can soak up the syrup, then turn it out onto a rack to cool. If you use a bundt mould, you have two choices as to which side you want on top, both look good.

For a real treat, eat the Babka whilst it’s still warm. In any case, it’s at its best on the day of baking. Keep it in an airtight container and it will be fine the next day, just slightly drier.

For a special occasion, place a candle in the bundt hole and light it. Like this, it serves well as an alternative birthday cake.

I do recognise that not everyone loves cinnamon as much as me. Or maybe you just want a change. Either way, it’s fine to leave out the cinnamon if you don’t want it. But better than that, use a flavoured bar of chocolate instead. My favourite is chilli chocolate, but I reckon orange chocolate and ginger chocolate would work well too.

For a special breakfast such as Christmas, prepare the babka the night before and leave it in the fridge overnight where it will rise slowly. In the morning, just pop it into the oven and you’ll have a delicious warm babka for breakfast.

Thanks for visiting Tin and Thyme. If you have a go at making this chocolate babka, I’d love to hear about it in the comments below. And do please rate the recipe. Have you any top tips? Do share photos on social media too and use the hashtag #tinandthyme, so I can spot them.

If you’d like more chocolate recipes, follow the link and you’ll find I have an awful lot of them. All delicious, of course.

Delicious eaten either warm from the oven or at room temperature. It will keep for a few days in an airtight container, but it’s best consumed within two as it will dry out as time progresses.For a special breakfast such as Christmas, prepare the babka the night before and leave it in the fridge overnight where it will rise slowly. In the morning, just pop it into the oven and you’ll have delicious warm babka for breakfast.Instead of cinnamon, try a flavoured chocolate such as orange, chilli or ginger.Please note: calories and other nutritional information are per serving. They’re approximate and will depend on exact ingredients used.

I’m sharing this recipe for chocolate babka with Lost in Food for #CookBlogShare.