Vegan oatmeal made with rolled oats and prunes for sweetness. Crunchy nuts and warming cinnamon give additional flavour, nutrition and texture to this healthy and delicious prune porridge. 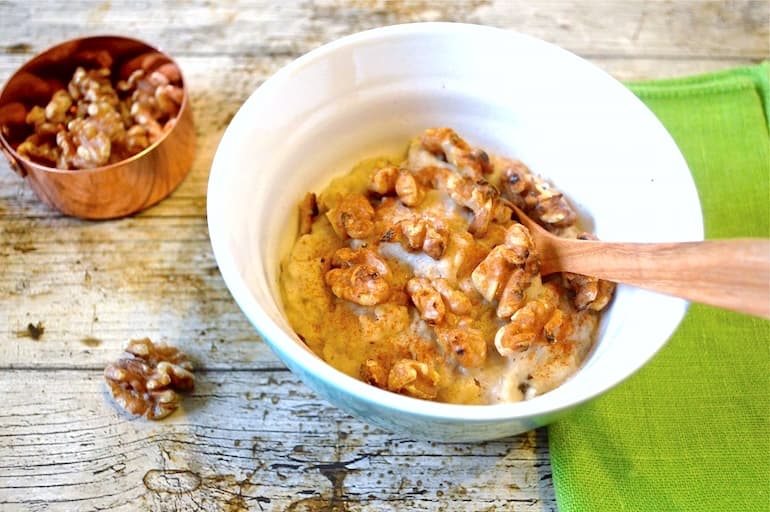 At this time of year, there’s nothing quite like a warming bowl of porridge for breakfast. It’s quick to make, comforting to eat and keeps you sustained for several hours. Plain porridge is good, but it’s nice to jazz things up a bit and this vegan prune porridge topped with toasted walnuts and cinnamon makes it a bit more special.

I like to start my day with a healthy breakfast and usually have my porridge fairly plain. Organic oats are a must, but I do often add prunes for sweetness.

They work really well in porridge as they break down quickly and provide additional nutrition including vitamins A and K as well as antioxidants. With a few prunes, there is no need to add sugar, honey or any other sweetener. Prunes reduce your porridge’s glycaemic index and they don’t cause a blood sugar spike either.

On special occasions or for a weekend treat, I omit the prunes and add a slug of whisky, a spoonful of honey and a dollop of clotted cream to my porridge. Er, what was that I was saying about healthy breakfasts?

Luckily this prune porridge topped with walnuts and cinnamon makes for a delicious alternative. It’s fast becoming my favourite way to eat my oats. The toasted nuts add crunch and taste and the cinnamon gives a warming scent as well as flavour.

Porridge is very simple to make and everyone has their favourite way of preparing it. As part of my commitment to eating more vegan foods for Veganuary this month, I swapped my normal half dairy milk half water for rice milk, as used in these vanilla almond cookies. I was pleasantly surprised and happy with both flavour and consistency.

Oat milk sort of makes more sense and I reckon my hemp milk wold be pretty good too. But you know what you like best, so please use your favourite plant milk.

The recipe below makes one bowl of porridge, but the quantities can easily be doubled, tripled etc if more is required.

Thanks for visiting Tin and Thyme. If you make this vegan prune porridge, I’d love to hear about it in the comments below. And do please rate the recipe. Have you any top tips? Do share photos on social media too and use the hashtag #tinandthyme, so I can spot them.

If you’d like more vegan recipes, follow the link and you’ll find I have quite a lot of them. All delicious, of course. And if you’d like a few ideas from further afield, head over to this 31 healthy vegan breakfast recipes which is a collection of recipes from other food bloggers as well as myself.

Quantities can easily be doubled, tripled etc if more is required.If using dairy milk, use half water, half milk.Please note: calories and other nutritional information are per serving. They’re approximate and will depend on serving size and exact ingredients used.

As I grew up on porridge and my mother makes the best porridge ever, I’m sending this off to Coffee & Vanilla for Inheritance Recipes which is also run by Pebble Soup.