This thrifty banana chocolate vegan honey cake is not only delicious, but it can be cut into eight generous slices. It’s really easy to make and it’s nice and sticky too. 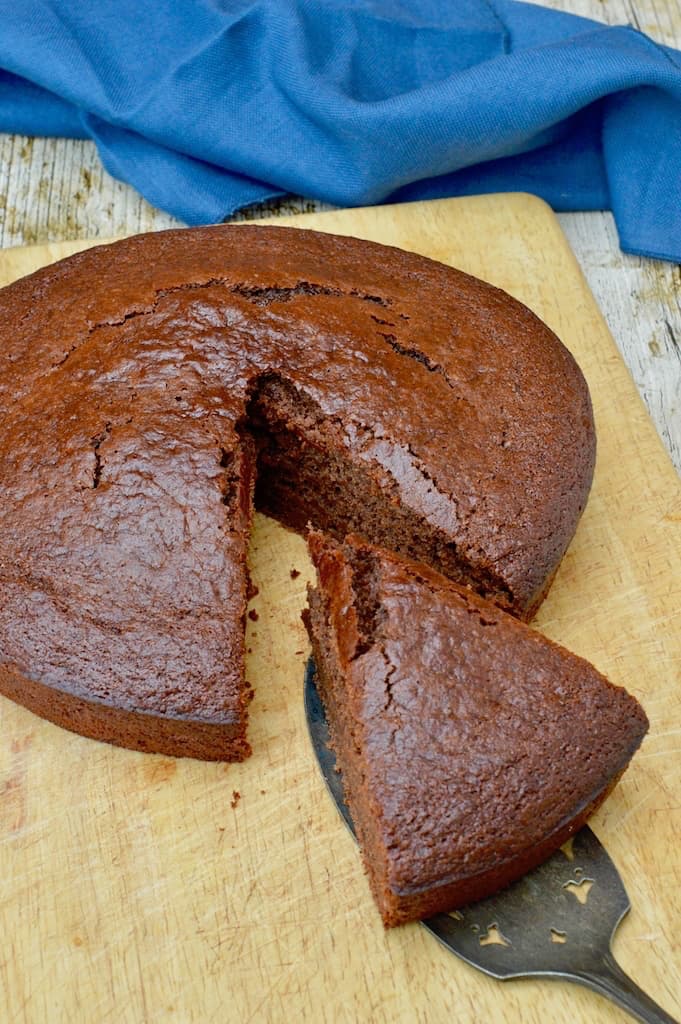 Did you ever think it was possible to make a decent sized chocolate cake for a £1? I certainly didn’t. Not, that is, until I set myself the challenge of doing so.

Live Below The Line

As many of you will know some intrepid people are taking part in the Live Below the Line challenge this week. This is a campaign to raise both awareness and money for the 1.2 billion people living in extreme poverty around the world. Yes, some people live on £1 a day, or even less.

We are so lucky living in one of the richest countries of the world. Even though we moan about the cost of food and some families have been struggling in the current recession, it is as nothing compared to those who genuinely have little, or even no, food, fuel or home and certainly no welfare state to look after them.

Participants have been challenged to spend only £1 per person per day on food and drink for five days and raise funds whilst they are doing so. Vanesther of Bangers & Mash is putting her family through its paces and taking part this year as is Michelle of Utterly Scrummy.

Ceri of Natural Kitchen Adventures too the challenge earlier last month to help promote the cause. Hats off to them. Well if they can live off £1 for a whole day, surely I can have a go at making a cake for £1.

Chocolate Cake for a £1 Challenge

A few months ago Froogs of Frugal Queen challenged me to make a cake for £1. A chocolate cake for a £1? Really? I thought not, so let it sit on the back burner – until now.

So, I’m challenging you all for this month’s We Should Cocoa to try making a chocolate cake for £1 (or equivalent currency). I didn’t think it was even possible, so I will be particularly interested to find out how you fare.

Please make your best effort and if it can’t be managed, then let us know how much over £1 it cost. I know you are an inventive lot, so I’m pretty sure some of you will work wonders. I leave you to interpret the £1 as you will, but I’m thinking cost of ingredients rather than oven time.

Good luck and I look forward to seeing what you all come up with.

To get you all in the mood, this £1 banana chocolate vegan honey cake was the first of two I made for this challenge. The second one was this malted hot chocolate cake. I surprised myself hugely and managed to get them both within budget.

Granted, it’s not a rich chocolate cake, but it is the sort of chocolate cake that kids, as well as adults, will enjoy. It reminds me of a banana version of sticky gingerbread. It’s really good.

As the cake has a lovely sticky texture, it stands up well on it’s own. It doesn’t really need any adornment, but you could dust it with cocoa powder if you like. Although it’s meant to be a frugal cake, I have been known to serve it with whipped cream and homegrown strawberries.

This banana chocolate vegan honey cake is really easy to make and it takes very little time too. The recipe makes an eight inch (twenty centimetres) round cake and it serves eight people.

Use a fork to mash the banana in a bowl along with the sugar. Add the dandelion honey, vinegar and oil and stir well until combined.

Sift all of the dry ingredients, including the cocoa powder, into a large bowl.

Make a well in the flour and pour the banana mixture into the middle. Using the same fork, or a wooden spoon, mix gently from the inside out until everything is just combined.

Pour in the water and stir gently until just combined.

Scrape the mixture into an eight inch (twenty centimetre) round silicone mould or lined cake tin. Gently tap the tin on a hard surface to remove any air bubbles.

Bake the cake in the centre of a preheated oven. It will take around forty minutes to bake, but it’s a good idea to check it after thirty five minutes. If the cake is set and the top firm to the touch, it’s ready to come out.

Leave in the tin for ten minutes before turning out onto a wire rack to cool completely.

What To Use Instead

In fact, I was so impressed with this vegan banana chocolate honey cake, that I’ve made it several times since the original challenge. You don’t have to use the exact ingredients I’ve given in the recipe card at the bottom of the post. I’ve listed here, some of the substitutions you can use.

I just use a wide mesh sieve and try and get through as much as I can. Anything left over, which generally isn’t much, I put into the compost bin.

These days, I also tend to use light muscovado sugar instead of golden caster sugar as it gives such nice caramel tones. It also helps to keep the cake moist.

I still use my homemade dandelion honey, but if you don’t have any, there are a number of other options. You can now buy vegan honey, so that’s a possibility if you’re vegan. If you’re not, use regular honey instead. Alternatively, go with golden syrup, which is generally much cheaper.

Malt vinegar is usually the cheapest vinegar to buy, so that’s why I used it in my original recipe. However, any vinegar will do. I usually use my own kombucha vinegar, but wine or cider vinegar would be fine too. Balsamic vinegar works really well in this celebratory vegan chocolate cake recipe, so use that if you fancy it.

How Much Does It Cost To Make Vegan Chocolate Cake?

This is how much my vegan banana chocolate honey cake cost me. Bear in mind that the prices are from May 2014, so it’s really only a snapshot.

The banana was the most expensive part of the whole cake and accounted for twenty percent of the total. I also made my own dandelion honey. If you use real honey or even golden syrup, it’s likely to be a bit higher. Having said that, I used a couple of organic ingredients, which cost more than non-organic ones. So you could make a couple of price wins there.

Here are the costings:

Thanks for visiting Tin and Thyme. If you make this vegan banana chocolate honey cake, I’d love to hear about it in the comments below. And do please rate the recipe. Have you any top tips? Do share photos on social media too and use the hashtag #tinandthyme, so I can spot them.

Can use ordinary honey or golden syrup instead of the vegan honey.Please note: calories and other nutritional information are per serving. They’re approximate and should only be used as a guide.