These vegan peanut butter banana muffins are so quick and easy to make that they’re the perfect bake for when you’re in a hurry or unexpected guests arrive. Not only are these muffins super delicious, but they’re made with wholemeal spelt flour and are vegan too. As a bonus, you’ll also find a gluten-free almond butter version later in the post. 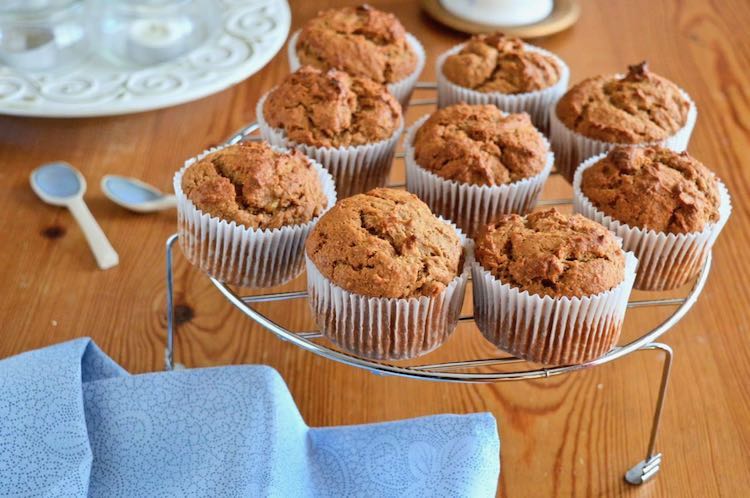 Well I couldn’t let Veganuary go by without some sort of a vegan bake now could I? As some of you may have picked up by now, I’m trying to cut down on my sugar intake. I’m allowing myself one sweet thing a day and it’s not allowed to be junk. More often than not this month, it’s been hot chocolate. Although some days, I’ve had a few dates or a vegan version of my chocolate porridge.

Last week, we had some workers round cutting down an old goat willow. It was a lovely tree and I felt a bit sad to see it go, but we need a lot more light if we want to grow our own veg again. Plus it was sucking up all of the water from the soil which was not what we needed in last year’s drought. It had to go.

Anyway, the long and short of it was that I went all out and baked these vegan peanut butter banana muffins. Did anyone query them? Not at all. They were demolished with relish.

I’m generally not a fan of American style muffins. I find they’re either too sweet or don’t really have much flavour. These vegan peanut butter banana muffins on the other hand, are neither too sweet nor lacking in flavour. They have a fabulous sticky banana bread quality to them too.

If like me, you like your bakes to be nutritious, you will approve of these. They are made of wholemeal spelt flour, bananas, peanut butter, coconut sugar and a little coconut oil. Oh and some cinnamon to round it all off.

All but the bananas are store cupboard ingredients, so they’re great bakes to make at pretty much any time. 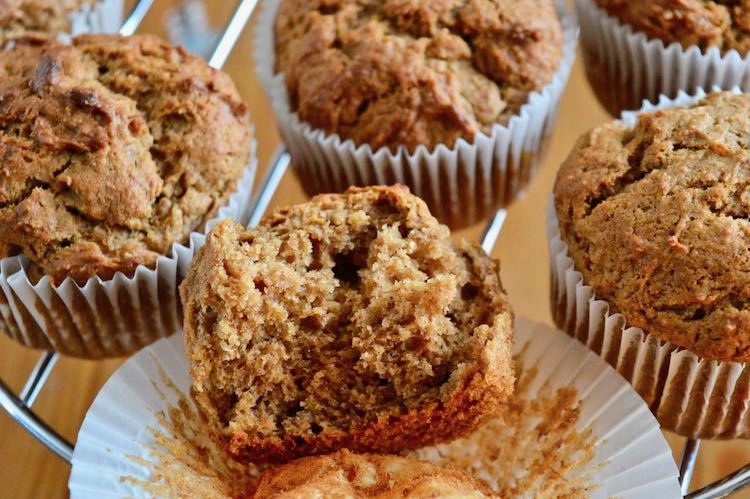 The recipe is not only quick to put together but it’s very forgiving. If you don’t have any coconut sugar, it’s fine to use another unrefined sugar such as muscovado. I’ve found that coconut oil works really well in baking, but you could replace it with rapeseed oil or even sunflower oil if you need to.

You can also replace the spelt with any wholemeal wheat flour or even a gluten free-one. If you prefer the idea of using your favourite nut butter, go ahead and use it. I can’t guarantee it will work, but I’m pretty sure those banana muffins will still be awesome. 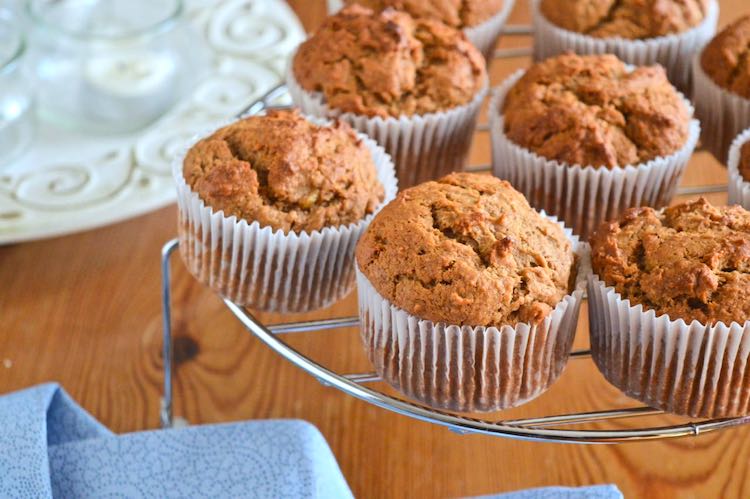 There were a few muffins that made it past the day of baking. I had one a day until they were gone and they were just as good on day five as they were on day one. These tasty vegan peanut butter banana muffins perked up my lunch box no end. I might even bake some more today.

The vegan peanut butter banana muffins were so good, I had to make another batch soon after. This time I wanted to try them with gluten-free flour to see how they turned out. My favourite brand is Free From Fairy’s wholegrain gluten free flour. It’s rice free and has worked well for me every time I’ve used it. 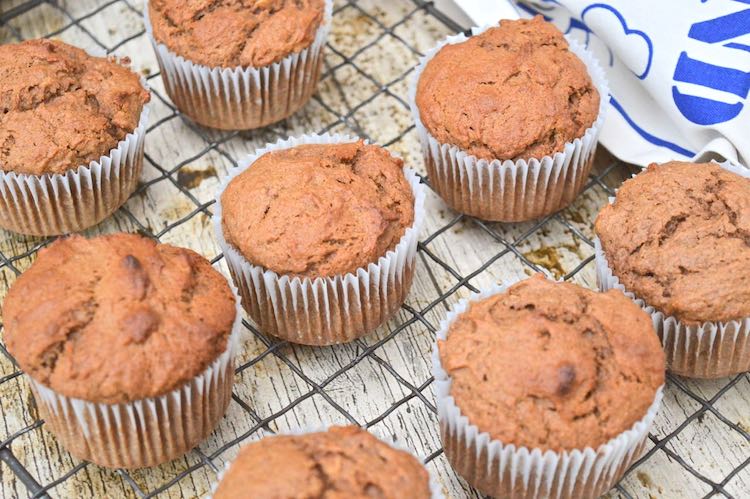 Rather than peanut butter, this time I used some rather splendid orange flavoured chocolate almond butter that I happened to have. The muffins were possibly even better than the originals. My wheat intolerant friend was delighted with them and kept telling me she couldn’t believe they were so good.

For even more vegan baking recipes and ideas, head over to my Vegan Bakes board on Pinterest.

Thanks for visiting Tin and Thyme. If you make these vegan peanut butter banana muffins, I’d love to hear about it in the comments below. Do share photos on social media too and use the hashtag #tinandthyme, so I can spot them.

If you’d like more peanut butter recipes, follow the link and you’ll find I have quite a lot of them. All delicious, of course. 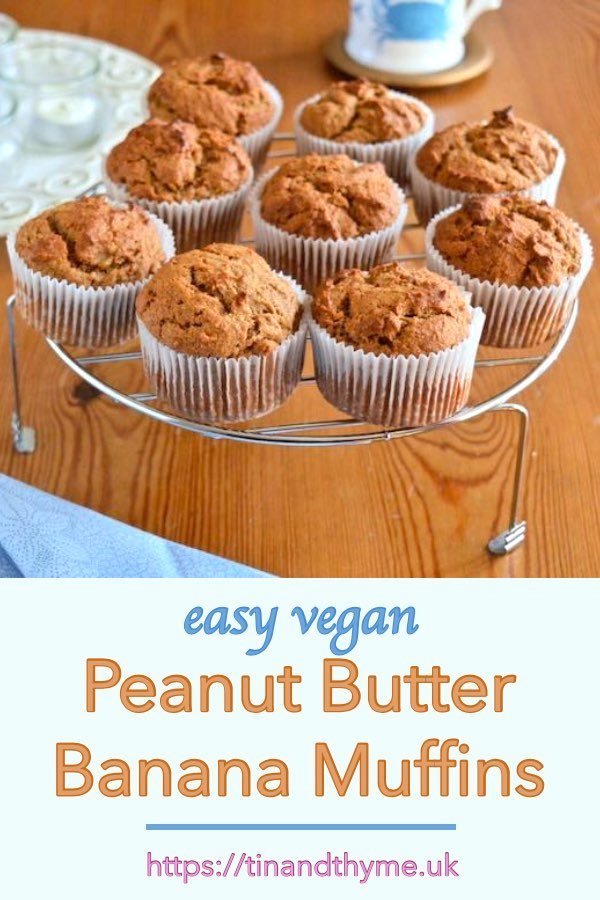 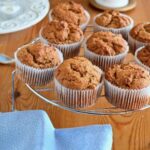 This is a really quick and easy recipe to put together. They can be made in 30 minutes with very little faff. They're also delicious, vegan and not to heavy on the sugar. As with most of my bakes, they're made with wholemeal spelt flour.
Prep Time10 mins
Cook Time20 mins
Total Time30 mins
Course: Afternoon Tea, Snack
Cuisine: British
Keyword: bananas, muffins, peanut butter, quick, vegan
Servings: 9 muffins
Calories: 188kcal
Author: Choclette @ Tin and Thyme

The bananas need to be ripe so that they mash well, but they don't need to be brown. Bran inhibits the rising process, so leaving out the largest bits helps the muffins to get to a good size and texture. Please note: calories and other nutritional information are per serving. They're approximate and will depend on exact ingredients used.

I’m sharing this recipe for vegan peanut butter banana muffins with The Peachicks Bakery for #CookBlogShare and with Searching for Spice for #CookOnceEatTwice. It also goes to Jo’s Kitchen Larder for #BakingCrumbs and Casa Costello for #BakeOfTheWeek.